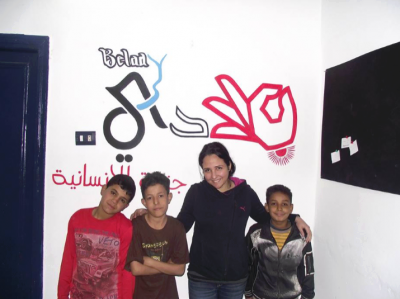 The South Cairo Criminal Court postponed Monday the trial session of eight defendants working and affiliated with the Beladi Foundation for Street Children to 13 February, as defendants were late to arrive to the courtroom.

Founders of the foundation, Aya Hegazy and her husband Mohamed Hassanein, were arrested in May 2014 after the police raided the premises and closed down the NGO for being “established without a licence”, after a complaint was filed by an individual, accusing the foundation of kidnapping his son.

Human rights lawyer Sameh Samir told Daily News Egypt that the trial session was adjourned because the representative of the prosecution had left, however Samir asserted that any other representative would have still been valid for representation during the session.

“The judge in this manner is ruling against the defendants not postponing; this is a crime, where the maximum duration of postponement is usually two months,” said Samir. “The case has been postponed once for six months, and this time for three months.”

“The case file remains blank,” added Samir. “We have yet to go through evidence and hear witness testimonies in the case, after almost a year of postponements.”

The defendants were referred to court last September by late Prosecutor General Hisham Barakat on charges of child abuse and human trafficking, but most importantly for “inciting and exploiting children to participate in violent protests”.

Earlier investigations indicated that the defendants mistreated the children, stripped them of their clothes and forced them to engage in sexual activities, according to the prosecution’s statement.

The Beladi Foundation was established in the aim of providing shelter for street children, developing their skills and securing a safe environment for them, according to the foundation’s statement, released following the arrests.

The foundation, which began operation in September 2013, was also involved in combating sexual harassment.

Regarding the licensing of the organisation, Samir stated that Beladi was still “under establishment” according to the law, which means it could operate pending the approval of the Ministry of Social Solidarity.

“When the case was opened, the ministry issued a statement that it would halt the legalisation procedures of the foundation due to the criminal offences levelled against its members,” noted Samir, “which means that the ministry was indeed studying the request for the licence at the time.”

Notably, the punishment for working without a license is a fine; however, the other charges could result in life sentences, according to Samir.

Samir is the lawyer for social activist Zeinab Ramadan, who was a friend of the foundation but not an official employee there. Ramadan was arrested nearly a week after the owners, when she responded to a mother’s request to visit her child in the new orphanage. The children were transferred to an orphanage in Dar Al-Salam following Beladi’s closure.

Hegazy graduated from Georgetown University and also holds US citizenship. She had decided to return to Egypt after the 25 January Revolution, hoping to actively engage in social development.