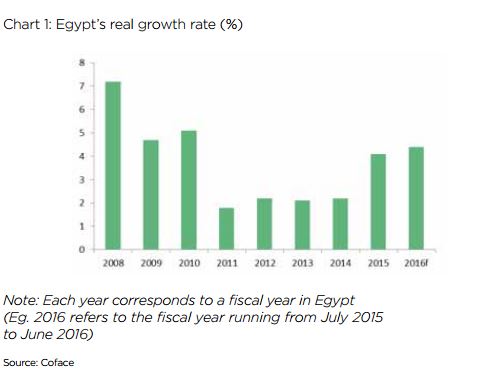 The report added that continued upward pressures on inflation, which increased by 10.3% in October, are mainly due to the country’s growth recovery, the increase in fuel prices following subsidy reforms and the weaker Egyptian pound.

Egypt’s low competitiveness is one of the structural weaknesses in its economy, which is said to be due to its fragile security situation and risks of political instability.

Although Egypt’s external accounts are expected to improve, its current account balance will remain in deficit for the next few years. Data shows that FDI inflows into Egypt last year rose from $4.1bn to $6.4bn, with an increase of 69.1% in net greenfield inflows.

Nevertheless, if oil prices remain low, this may cause a fall in FDI, grants and remittances from Gulf countries. This would restrict the much needed investments to restore the country’s infrastructures, according to the report.

Coface added that regional and domestic security risks are weighing on the business environment and the recovery of the tourism sector, which accounts for roughly 20% of the country’s foreign exchange earnings.

Discussing the tourism sector, the report described it as having moderate growth, yet the risk is still high. The report mentioned that as a result of campaigns by the Ministry of Tourism to attract tourists, the number of tourists from Saudi Arabia, the UAE and Kuwait has jumped by 149.4% between July and December.

The tourist arrivals in Egypt have increased last year compared to low levels registered after the revolution. In 2014, 9.9 million tourists visited the country, while in 2010, nearly 15 million visitors came to Egypt.

The total contribution of travel and tourism to GDP stood at 12.8% in 2014 and is expected to remain stable in 2015, according to data from the World Travel & Tourism Council (WTTC).

The travel and tourism sector directly generated 5.2% of total employment in 2014 (1.3m jobs) and this figure is forecast to reach 5.4%, the report highlighted.

In the first half of 2015, the number of tourists visiting Egypt increased by 8.2% from a year earlier, to reach 4.8 million. Visitors from Western Europe accounted for 31.6% of the total arrivals in Egypt, with British tourists making up 29% of this figure.

Among the sectors that are expected to recover is the automotive sector. In 2014, Egypt’s total vehicle production stood at 27,020 units, nearly 31% down from a year ago, the report said.

Despite its strengths, Egypt’s automotive sector faces challenges. The biggest of these challenges is related to the limited availability of dollars at banks.

The automotive sector is also gaining pace, thanks to higher per capita income and solid demand from the country’s large population. The sector, however, still has some way to go in terms of financing, production volumes and regulations, in order to become more competitive.

The government is paying particular attention to economic reforms, as the country needs foreign investment in order to restore the fundamentals for economic development, the report said.

As part of its fiscal reforms, the government decided to cut energy subsidies as a first move towards eliminating them almost entirely in the medium term. This is in line with the official target of reducing fiscal deficit to 8%-9% of GDP by the 2018/2019 fiscal year, down from close to 13% for the 2013/2014 fiscal year.