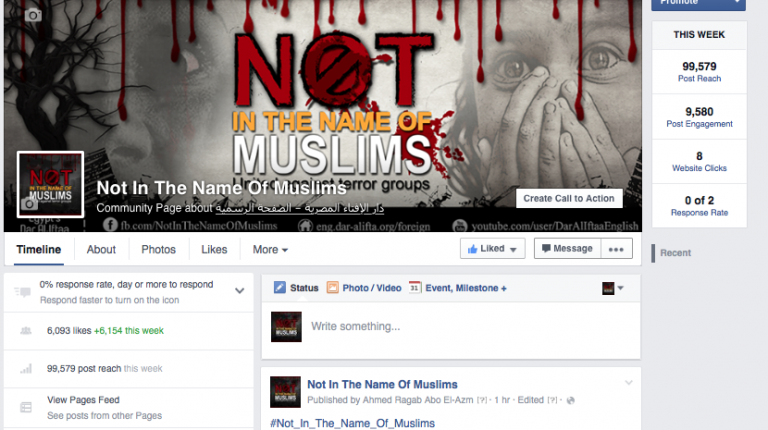 Egypt’s Dar Al-Ifta created a Facebook page entitled “Not in the name of Muslims” as part of their initiative to tackle Islamophobia in the West, following the recent terrorist attacks in Paris and the Russian plane crash.

Dar Al-Ifta, Egypt’s foremost authority on issuing religious edicts (fatwas), announced the launch of an international campaign “to clarify the tarnished image of Islam across the globe” in a press conference on Wednesday. The initiative targets non-Muslims and is concerned with explaining the correct teachings of Islam.

Grand Mufti advisor Ibrahim Negm said Muslims and Arabs have to start communicating the real image of Islam to the West. “We – Arabs and Muslims – have wasted a lot of time talking to ourselves and it is necessary that we communicate with the other to limit the rise of Islamophobia.”

The Facebook page will publish content in English, French, and German as a start towards interacting with the West. The campaign does not only seek to exonerate the name of Islam from the terrorist group’s acts, but also to condemn the acts.

The initiative will not be limited to online presence; Dar Al-Ifta scholars will go on tours to Europe “to communicate the real message of Islam” and confront extremism.

Grand Mufti Shawqy Allam said terrorists and their deeds can in no way be linked to Islam. All Muslims condemned the terrorist attacks and expressed their solidarity and support for the innocent victims.

Allam said false fatwas proved to be one of the main reasons behind extremism and terrorism. “We created an observer to monitor the extreme fatwas and the demolition and destruction they cause”.

Dar Al-Ifta called upon the international community to exert the necessary efforts to prevent the defamation of Islam, pointing out that they are currently facing several internal and external challenges, which requires further collaboration between countries on all levels.

Al-Sisi calls on preachers to correct ‘flawed image’ of Islam