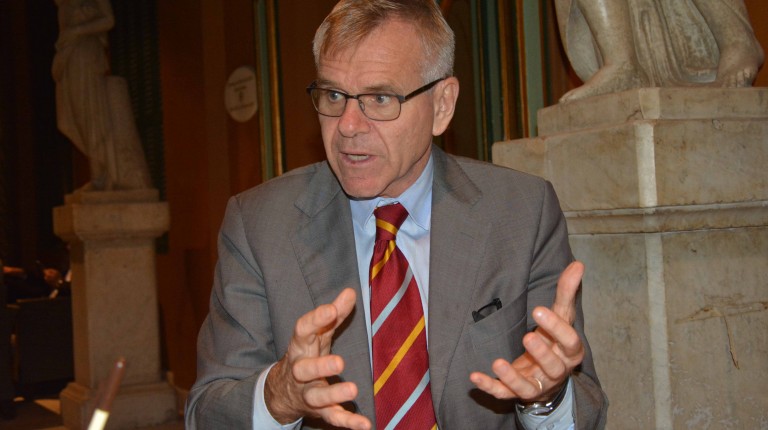 How much are the funds allocated for the solar projects in Benban and Zafarana in Egypt?

Scatec Solar is planning to invest $600m during two years in Egypt. As the sun is very stable from morning to evening, plenty of solar power can be generated in Egypt. These investments will create employment. We don’t bring workers from abroad. We find people locally, hire and train them so they can build the plant. We’ve begun discussions with Egyptian companies in regards to training local workers and teaching them the skills during the construction of solar plants.

Solar energy is a job creator. For instance, in Benban, there are 40 solar sites. The area is undeveloped because there are no local jobs. The construction of the big solar plants here requires about 20,000 to 30,000 people, if not more.  Over two years, these solar plants will generate 100,000 jobs directly or indirectly.

Why did you participate in the “Solar Projects Egypt” conference on 27 October?

There have been several solar energy events in Cairo over the last year, but this one was different because it focused on preparing the activities on the ground. The conference showed that there is an emerging cluster of Egyptian companies that is preparing to play an active role in developing the solar market in Egypt.

In my view, if Egypt moves according to its ambitious timeline, it can emerge as a world star in solar energy. India, South Africa and China are large countries and play an important role, but in the MENA region, I am optimistic that Egypt can become the leading hub on solar development, and gradually even manufacturing. Egypt is potentially a very attractive market because for every KW/hour of solar energy that can be produced, you actually replace the fuel that Egypt has to import in order produce electricity. Importing fuel is expensive and a drain of precious foreign exchange reserves. Solar energy can replace imported oil, fuel and diesel to produce electricity.

From a global perspective, the Benban area is a huge and fantastic area because it is linked to the infrastructure of the Aswan Dam – so it can combine hydro, wind and solar power. So this area is very suitable for building solar power farms.

Solar power is clean and avoids the thousands of tonnes of CO2 emissions that would otherwise be emitted when fossil fuel is used to produce electricity. We have estimated that the five projects to be built by Scatec Solar in itself yearly will save the world from 300,000 tonnes of CO2 emissions, equal to 7m-5m tonnes in the first 25 year of operation. Besides, as Egypt moves towards reducing emissions, there is a possibility to get international climate finance.

When will the company start work on the projects?

We have started recruiting people in Egypt. We received applications from plenty of very good and highly motivated candidates. Some people want to come back to Egypt to work in this sector. There is no solar industry here right now, but we have a lot of qualified people that can build up here to enable Egypt to become a leader of solar energy in the MENA region.  We have also started coordinating with local companies. In a few weeks, we will finish the process of equipping the office and hiring people.

We prepare to begin implementation of the projects in the two areas in parallel, but this depends on the investment in infrastructure in the two areas. But I think Benban is very advanced to start work, but in Zafarana there is some planning to do.

Are you worried about Egypt’s delay in the final contract?

When the government launched this programme, they knew that it will create a lot of interest among foreign investors who are prepared to invest in Egypt. So I don’t think that the government will sacrifice the opportunity of so many specialised companies who are ready to come and work in Egypt. We expect that the momentum that has been built up will be maintained. We look forward to start in 2016 as we are ready. The Egyptian Electricity Transmission Company (EETC) is ready to sign the contract of sub-stations and they want to start in 2016, so there is no reason to delay.

Once we sign the contract, we will sign the finance arrangements. That may take about three or four months. Construction can start after the final agreement and organising the finance.

We are here not only to build the plants, but also to own and operate them for a long time – about 25 years. So we will be responsible for them. We are not equipment manufacturers who supply equipment and leave. We are an integrated power producer with a long term vision. We monitor all the time. We have an operational maintenance programme and employ people to do this as we are aware that it is an important issue.

What is your plan for investments in Egypt?

First of all, we have been in Egypt since 2013 in the Kom- Ombo programme. In 2014, Scatec Solar shortlisted for the Kom-Ombo 10 x 20 MW PV tender. We have responded to the invitation by the Egyptian government’s EETC to four companies to make a proposal to participate in programme Kom-Ombo for 10 x 20 MW. We are a part of that programme, but so far no final contracts have been awarded.

Last year, the government invited local and international companies to participate in a feed-in tariff (FIT) photovoltaic programme launched for 4,300 MW of Solar and Wind by 2017 and a further 9,000 MW of solar planned until 2022. They put a deadline by 2016. A MoU was signed in Sharm El-Sheikh’s Economic Summit in March for producing 50 MW in the Benban area; then we signed a partnership agreement with four Egyptian companies to work together, help them in construction and investment, and cooperate with them to produce a total of 200 MW.

What are the challenges of investing in the Egyptian market?

Egypt is experiencing pressure on its currency. So the issue is to see how the CBE makes sure that foreign investors are comfortable and reserve its exchange.

We are fundamentally positive about the Egyptian economy, but for the moment, we know that there are challenges and everybody is waiting to see the measures by the CBE to stabilise the situation and provide foreign currency.   I expect it is a short-term problem because I believe that the CBE is very keen to attract more investments.

Who are your partners?

We have Arab, international partners and local partners. Local companies will be involved in plant construction and supplies. We are still in the process of finalising the contracts with four Egyptian developers.

What is the method and source of funding for the projects in Egypt?

How much money is allocated for each region?

What were the company’s revenues in the third quarter of 2015?