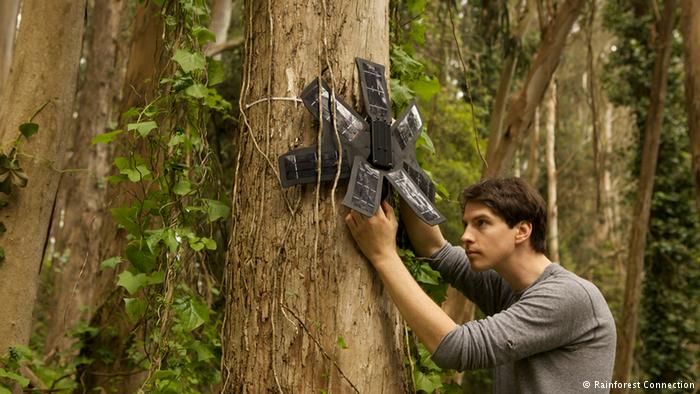 Rainforest Connection, a small NGO, is using a network of old cell phones to catch illegal loggers in rainforests around the world.
In the summer of 2011, Topher White visited the rainforest in Borneo for the first time. He was just a tourist, he said, there to visit a gibbon sanctuary.

“It was the overwhelming sounds of the forest that struck me the most,” he recalls. “There is this constant cacophony of noise. But in fact, the most important noise that was coming out of the forest at that time was one that I didn’t notice and in fact, nobody there had noticed it.”

It was the sound of a chainsaw.

Illegal loggers were cutting down trees, right in the gibbon reserve, about 2 kilometers from where White was standing. Nobody heard it. That got him thinking and the engineer came up with an innovative idea: Why not use old cell phones to monitor the rainforest?

“Cell phones are great. They are full of sensors,” White said. “And they are being thrown away by the hundreds of millions every year.” Among the many sensors in mobile phones are sophisticated microphones and a GPS tracker.

So in essence, the phone could be installed high up in a tree. It would listen for the sound of a chainsaw and recognize it much the same way that an app like Shazam can recognize a specific song. Then it could send an alert to the authorities and since the phone is equipped with GPS, the forest rangers would know exactly where to look for the illegal loggers.

But wait a minute: How can a mobile phone alert anyone in the middle of the jungle? “The real surprise was that there was cell phone service out in the forest,” White said. “We’re talking hundreds of kilometers from the nearest roads.”

So, like any self-respecting start-up founder, White went into his parents’ garage and started tinkering. He developed software and built waterproof cases to protect the little computers from the elements but he soon discovered the real challenge was to power the phones out in the forest.

The obvious choice was solar panels but not a lot of sunlight penetrates the thick tree canopy. In the end he stripped the phones of any unnecessary components that drained power, including screens and speakers. And he developed a design where several small solar panels are placed around the phone like flower petals.

In the meantime, White has turned his endeavor into an NGO, Rainforest Connection, and launched a successful Kickstarter campaign that has so far raised over US$150,000 (140,000 euros). He is also getting a whole lot of used smartphones these days as many people have started to donate their old devices to his cause.

When they initially tested the system on the Indonesian island of Sumatra, success came almost instantly. They discovered a group of illegal loggers, who were so surprised to get caught red-handed that they cooperated, left peacefully and haven’t returned since.

With plenty of support from environmentalist groups and volunteers, Rainforest Connection has since installed its system in Cameroon and is currently setting one up in Brazil’s Amazon region. And it all started because of White’s fascination with how noisy the rainforest was.

1962 glass could be Corning’s next bonanza seller