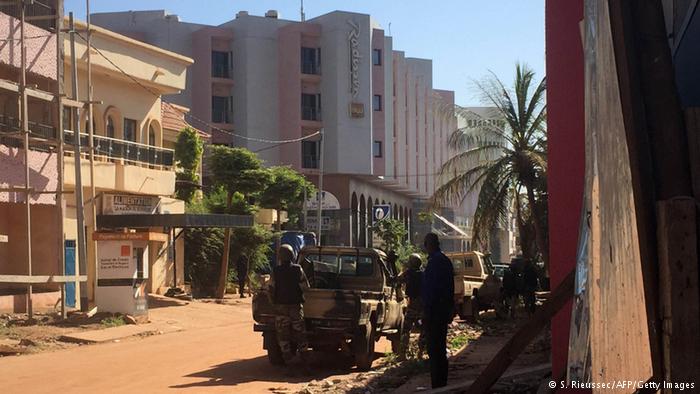 Mali special forces have stormed the upscale Radisson Blu hotel in Bamako and freed around 80 hostages. Suspected Islamist miltiants had taken around 170 guests and staff hostage in brazen daylight attack.

Mali’s state-run broadcaster reports that special forces had stormed a luxury hotel, freeing many hostages held by suspected Islamist gunmen. Friday’s attack has targeted one of the African country’s most popular lodgings for foreign business travelers.

“Our special forces have freed hostages and 30 others were able to escape on their own,” Security Minister Salif Traore told the AFP news agency.

“The attackers are still inside. We’re hearing gunfire from time to time,” an unnamed witness outside the Radisson Blu hotel told the Reuters news agency.

Malian army commander Modibo Nama Traore said 10 gunmen had stormed the complex shouting “Allahu Akbar,” or “God is great,” in Arabic before firing on the guards, throwing grenades and taking around 170 guests and staff hostages as they moved from floor to floor inside the 190-room hotel.

A security official told the Reuters news agency that initially some of the hostages had been freed after apparently proving their Muslim faith by reciting verses from the Koran.

But at least three hostages have already been killed, the Malian security ministry said as government troops cordoned off the hotel in the center of the city.

Mali President Ibrahim Boubacar Keita cut short a trip to a regional summit in neighboring Chad. Operations are underway to neutralize the attackers and free the hostages.

Witnesses said ambulances were rushing to the hotel as a military helicopter flew overhead. The United Nations mission said it was sending armed reinforcements.

So far at least three hostages had been killed and two private security guards were wounded in the early stages of the attack, Reuters reported.

Reuters quoted a source close to French President Francois Hollande as saying French nationals were among those present in the hotel. The diplomatic source spoke of two or three attackers.

AP said the US embassy in Mali had urged citizens to take shelter amid reports of an “ongoing active shooter operation.”

Several Chinese tourists were among those trapped inside the high-rise building, reported the Chinese state news agency Xinhua.

Turkey’s state-run Anadolu news agency said six Turkish Airlines employees had been staying at the hotel and five of them had managed to exit the building.

India’s foreign ministry says its nationals were also being held by gunmen. “Our ambassador has confirmed that 20 Indians are held hostage at the hotel but they are alive,” foreign ministry spokesman Vikas Swarup told AFP.

On its website, Radisson Blu describes its Bamako hotel as “one of the city’s most popular conference venues” and a retreat “a bit west of the central bustle.” The hotel’s operator, Rezidor Hotel Group, said in a statement that it was assisting authorities.
“Our safety and security teams and our corporate team are in constant contact with the local authorities in order to offer any support possible to reinstate safety and security at the hotel,” it said.
Friday’s shooting in the Radisson complex follows a hotel siege and hostage-taking in the central Malian town of Sevare in August, when four soldiers, five UN workers and four attackers were killed. And in March, masked gunmen opened fire inside a Bamako restaurant frequented by foreigners , killing five people.
Peace deal in June
Despite a peace deal signed in June this year, large parts of Mali remain beyond the control of government and foreign forces. France still has about 1,000 troops stationed in the country.
In an audio recording released in October, the leader of the Ansar Dine jihadist group Iyad Ag Ghaly levelled treason accusations at rebel groups who signed the peace deal in Algiers.
Ghaly also referrred to January’s fatal jihadist attack on the French satirical magazine Charlie Hebdo, claiming “the Crusader has crossed all bounds.”
Malian security experts authenticated the tape on Monday in the wake of last Friday’s string of deadly attacks in Paris .