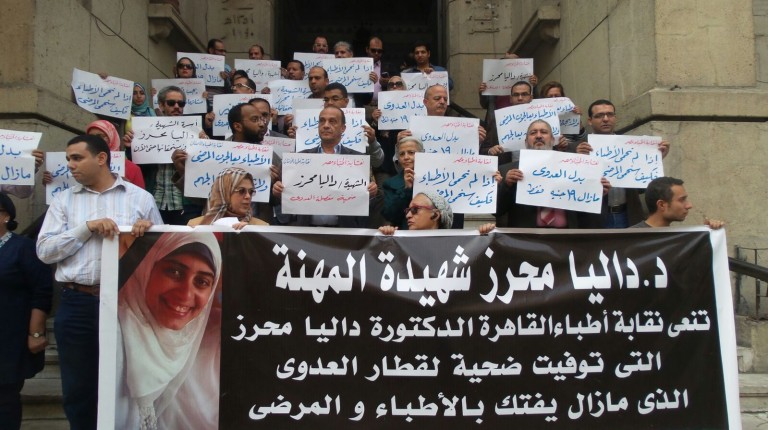 Tens of doctors gathered in front of the Doctor’s Syndicate calling on the Health Ministry to grant the family of Dahlia Mehrez, a doctor who died from meningitis infection during work, a full pension and a compensation for her death.

Mehrez, 28, died earlier in November from infection while working in a mobile clinic in the Qantara Gharb area of Ismailia. The Health Minister previously announced that Mehrez died due to an injury sustained from a car accident that Mehrez had been in five years previously, before acknowledging the real reason behind her death.

Assistant Secretary-General of the Doctor’s Syndicate Rashwan Shaaban told Daily News Egypt that they demand immediate and clear endorsement to protect doctors from the threats they face during their work. “We demand that the health minister provide appropriate places for treatment of doctors so that their fate won’t be similar to Dahlia’s.”

Shaaban called on the Health Ministry to apply standards of infection control and uphold safety standards at public hospitals, in addition to increasing the compensation amount. “All diseases that doctors pick up during work should be considered as work injuries and doctors should receive appropriate compensations.”

Demonstrators held signs to express their solidarity with Mehrez and called for quick action towards the doctors’ status. “If we don’t protect the doctors, how can we protect the patients?” the signs read.

“We hope there is a wise man in this country who listens to the doctors’ demands,” Shaaban said.

Doctors are currently entitled to only EGP 19 allowance if they are infected during work, despite the emerging deadly dangers they face in their jobs. “We call for increasing the infection allowance to EGP 1,000 per month instead of the current EGP 19.”

Next Saturday, the Doctors’ Syndicate will hold a demonstration in front of the State Council. The verdict is set to be announced in a case filed by the syndicate last year to increase the amount of infection compensation to EGP 1,000.

Mehrez was taking part in the national campaign of vaccines for families against German measles, but was requested to join a mobile clinic in the Qantara Gharb area of Ismailia. Shortly afterwards, she displayed symptoms of nausea, a rise in temperature, cognitive disorder, and cramps.