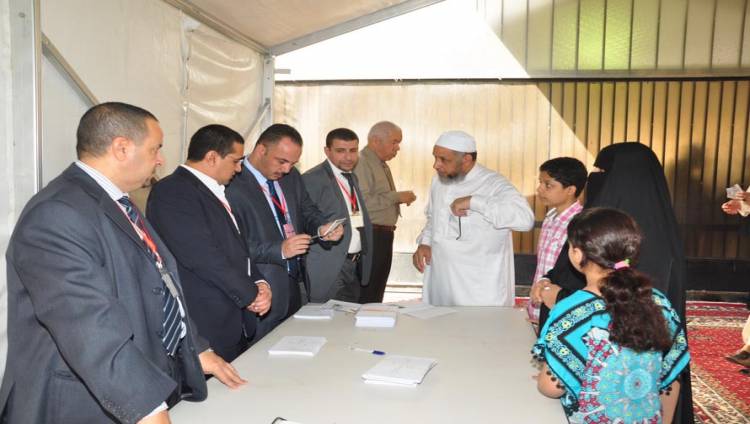 Egyptian expatriates began lining up at polling stations in 139 countries on Friday, to cast ballots in two days of voting for the second phase of the Egyptian parliamentary elections.

The Egyptian embassy in New Zealand was the first embassy to open its doors for elections Friday evening at 10 pm CLT. Japan, South Korea, Russia, China and Indonesia followed shortly throughout the day.

As a result of political unrest in some countries, voting will not take place in Yemen, Syria, Libya and the Central African Republic.

The legislature is comprised of 596 seats: 448 elected as individuals and 120 through the winner-takes-all lists. The remaining 5% of the parliament will be appointed by President Abdel-Fattah Al-Sisi.

Of the 120 seats allocated for party lists, eight will be held by Egyptian expatriates for the first time in the history of parliament elections.

The Foreign Ministry is closely following up on the voting process for Egyptians abroad. It coordinated with the Supreme Electoral Commission, the Ministry of Communication and Information Technology, and the Ministry of Planning, and the Monitoring and Administrative Reform to examine the electronic system through which Egyptian expatriates will cast ballots.

The ministry has reviewed a plan to ensure the voting process proceeds without obstacles, especially in the Gulf states, which witnessed a high turnout in the first round of elections.

Foreign Minister Sameh Shoukry gave directions to all diplomatic missions to coordinate with Egyptian communities abroad to inform them about all procedures related to the voting process.

Daily News Egypt interviewed Egyptians living abroad on their opinion about elections and their intentions to vote or not.

Injy Raafat, 24, who lives in Melbourne, Australia, said she will not participate in elections as she does not believe it has any benefit. “The Egyptian system will ever change and parliamentary elections won’t have any significant effect on any issue in Egypt. I lost hope in Egypt and I don’t think that any elections would help in developing the country.”

Ahmed Farid, 30, also lives in Melbourne, Australia. He agreed with Raafat saying he does not care to participate in an election that would not have any positive effect on Egypt. “I don’t believe in the importance of parliamentary elections.”

Nourane Badran, 24, lives in Paris. She said she will participate in elections. “I will go and participate because I know a respectable candidate Ashraf Omara in the Ismailia electoral district and I don’t want anyone else to succeed as I know this [candidate] and respect him.”

Badran said the Egyptian embassy in France is well-organised and totally secure, and usually elections occur smoothly without any problems.

Heba Said, 30, lives in Dubai, UAE. “What elections are you talking about? The elections experience here is bitter; the embassy here is not organised. The lines were very long and frustrating during presidential elections. No one contacted us from the embassy or gave us any information about the current elections.”

Ahmed Abdallah, 25, also resides in the UAE. “I won’t participate in elections because I know that it’s not worth it. No one got in touch with us from the embassy or the candidates.”

On the other hand, deputy president of the Egyptian Union in France Malak Shnouda does not believe that the security concerns in Paris could have any impact on the turnout. “It’s a call of duty; despite the security concerns, a lot of Egyptians headed to the embassy today to vote,” he said.

He added that the turnout this time in Paris is greater than the first round. Shnouda stressed that Egyptians abroad are following the media to know about the elections and the candidates. He added that the second generation born in France “does not have enough knowledge to participate in elections”.

Member of the General Union of Egyptians Abroad Ibrahim Geneina said the current situation is completely different from that of the first round of elections. “There are a lot of people casting their votes already and there are early queues in front of polling stations in Saudi Arabia and Kuwait. This reflects that Egyptians abroad are keen to take part in the road map.”

There is coordination between the embassies and the unions of Egyptians abroad to facilitate the voting process. The unions communicated with the expatriates as well to eliminate any obstacles, according to Geneina. “In Jordan, we provided buses to transport voters to the polling stations.” No voting problems have been reported to date.

“In some countries, there are two polling stations for around 1 million Egyptians. Sometimes, the polling stations are 300km away from Egyptian voters,” said Geneina, adding that it is a normal working day, so some Egyptians are not able to leave their work to vote.

Egypt has been without a parliament since June 2012, when a court dissolved the body. President Al-Sisi has held legislative power since taking office in 2014.

The last parliamentary elections held in Egypt came just months after the toppling of former president Hosni Mubarak and witnessed a turnout of 62% in the first round.

Egyptians speak up against ill-treatment at EU embassies in Cairo