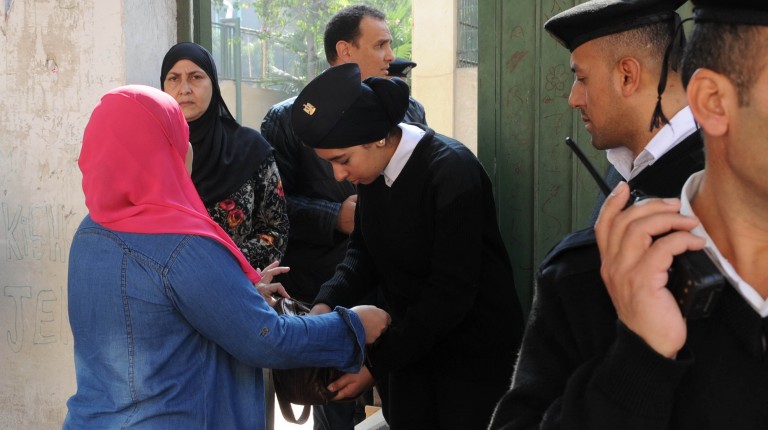 Forty-four candidates are competing in the electoral constituency of Ain Shams in the second phase of Egypt’s ongoing parliamentary elections.

Considered one of the “hotspots” in Cairo, Ain Shams will be represented in the parliament by three seats.

According to one of the judges in the Ibn Khaldoun School, where a polling station was located, 250,000 people are eligible to vote.

Despite having heavyweight contenders the polling stations witnessed low turnout, with elderly people and women dominating the scene, repeating the scenario of the first phase, in which the absence of young people was notable.

Armed and masked personnel from the armed forces and the police guarded the school. They had been in position since the previous day, blocking some roads approaching the school.

Members of the Supreme Electoral Commission (SEC) stood outside the polling station itself, waiting for voters to arrive at the almost abandoned school. One of the voters was an elderly woman named Sayida who was accompanied by an army soldier, helping her to climb the stairs. Sayida, 65, said she voted for “people who will bring stability to the country and eliminate terrorism and chaos”.

Sayida’s son Mohamed, 25, stood outside the school awaiting his mother. He is also registered in the Ain Shams district, but he said: “No candidate represents the waves of change that happened in Egypt over the years.”

He told Daily News Egypt: “Even if I am an opponent of the Muslim Brotherhood and a supporter of 30 June, there is no one that represents the anti-authoritarian trend that came to the surface in 2013.

“Most of the candidates are either business owners, lawyers, former Mubarak-era politicians, or people who are in the elections for their own benefit,” Mohamed said, adding that he is not participating in the elections.

In this election session, for the first time, Ain Shams stands as a separate entity, distinguished from its close neighbour Mataryia. The decision was widely approved by local people, ensuring that the district is represented by its own people.

Similar to many working-class neighbourhoods, Ain Shams was a rich electoral district for the Muslim Brotherhood before and after the 25 January Revolution. However, amid the ongoing violent crackdown against Islamists, several individuals who ran under the umbrella of the now-banned National Democratic Party (NDP) decided to run again independently, some under the influence of active parties.

Ain Shams is also said to have powerful families, such as that of Al-Ghobashi, Al-Bangy, and Al-Zoqla. The three wealthy families have candidates running for individual seats, and started campaigning by repairing street lights.

The contenders represented various parties, including Al-Wafd, the Free Egyptians, Al-Tagammu, and Future of a Nation. Almost all of the parties established headquarters to run their campaigns.

Mohamed Al-Komy, a candidate running under the umbrella of the Free Egyptians Party, was described by many voters as “a candidate who understood politics”.

Daily News Egypt spoke with one of his coordinators, who said: “Al-Komy is always informing people that he is not there to fix roads and provide services to the residents of Ain Shams, but rather carry the demands and problems of the neighbourhood to the parliament. Many candidates promise people prosperity, jobs and money, but they do not understand the nature and the role of the parliament.”

During its coverage of Ain Shams, Daily News Egypt interviewed several voters who stated that candidates and members of parliament are elected to directly improve the neighbourhood infrastructure, economy and local affairs, while few mentioned the role of candidate as legislators.

Said Ashmoun, a teacher who took the day off work to vote in the elections, said he will choose whoever will find jobs for the youth and improve the status of Ain Shams economically. Ashmoun, who took his children inside the polling station to take pictures, said he will vote for candidates on the For the Love of Egypt list and the individuals from the Free Egyptians Party.

When asked about the qualifications of his preferred candidates, he answered: “They are natives of Ain Shams and know well the problems of the district.”

On the other hand, the Al-Nour Party, which is running with a list, has continued its campaign methods of using chants, loud-speakers and offering services to residents.

However, despite its heavy establishment as the only Salafi entity in Ain Shams, the party fell short in competing with the individual candidates, who used songs, posters, microbuses and conferences.

One of the Al-Nour Party coordinators stationed at Ismail Hafez School said the spending of individual candidates is excessive, arguing that any political entity or party cannot compete with businessmen when it comes to campaign finances.

One candidate, Youssry Al-Assuity, is a former member of the dissolved NDP and has been campaigning for over a year. He had used banners congratulating Muslims and Copts on their religious holidays, held several conferences and hosted famous football players to talk and campaign for him in the elections.
One of his campaigners said: “We are depending on the people of Ain Shams to support us and choose the best candidate for the common good.” Asked to comment about his candidate’s programme, the campaigner, named Sobhi, said Al-Assuity is a businessman who has been involved in the affairs of the people of Ain Shams, and “he is a patriotic man who likes to serve people”.

Security wise, despite Ain Shams being a stronghold of Islamist groups who host almost daily protests, no clashes or attacks were reported.
However, a police colonel stationed outside the Na’am School told Daily News Egypt that five Muslim Brotherhood members were arrested in the past two days on charges of “aiming to sabotage the elections and belonging to a terrorist group”.

The arrested persons were allegedly part of the “Maganen Al-Horyea” Ultras group, which is famous for joining and leading anti-government protests, usually organised on Fridays by Brotherhood affiliates. The group often organises flash protests at minor public squares in Ain Shams and Alf Maskan Square. They have been active online recently, calling on residents not to vote and to take pictures of their nearest polling station, hinting at the absence of voters from the electoral process.