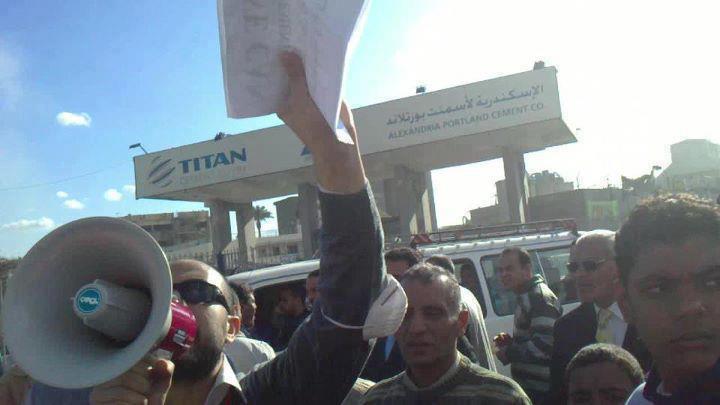 Another complaint was filed on Sunday at the Alexandria Prosecution against Portland cement factory, known as Titan, one of the complainants told Daily News Egypt.

The factory was built 40 years ago in the residential neighbourhood of Wady Al-Qamar in northwest Alexandria, putting residents’ health at risk of severe diseases due to excessive pollution from the wastes and emissions coming out from the factory’s chimneys.

Hany A, one of the residents, said: “This is not the first time we wake up to this smell. We cannot even breathe. This happens on daily basis.”

“We filed another complaint with the prosecution but were again told an investigative committee will be sent to review the situation. However, no one does anything,” he added.

The families demanded that the factory is transferred to eliminate the environmental hazards and health-related harms that put the families living nearby at risk.

The Environment Ministry plans to integrate coal as part of the energy industry by the end of 2015 among all heavy industrial Egyptian factories, including cement, fertilisers, iron and steel, as well as electric power stations.

The decision sparked anger among environmental activists who fear the negative consequences of coal use in Egypt.

According to Hany, Titan factory was found to have been using coal long before the ministerial approval, and in large quantities.

The Environment Ministry was not available for comment at the time of print.

Independent local coalition ‘Egyptians Against Coal’ announced in a meeting in early November their aim to advocate excluding coal from Egypt’s energy industry by 2017, due to its hazardous environmental threats.

During their meeting, the coalition discussed potential ways to raise awareness and advocacy on both the level of individuals and decision makers. The initiative brings together researchers, economists, lawyers, as well as journalists who are interested in environmental issues.

The Egyptian Initiative for Personal Rights (EIPR) filed a complaint with the World Bank against the same factory, as the World Bank is one of its main funders. The bank assigned an expert to investigate the situation, according to EIPR environment researcher Ragia Al-Gerzawy, but the process is still ongoing. “It is a very complicated process and takes a long time,” she said.

Environmental activists aim to eliminate use of coal