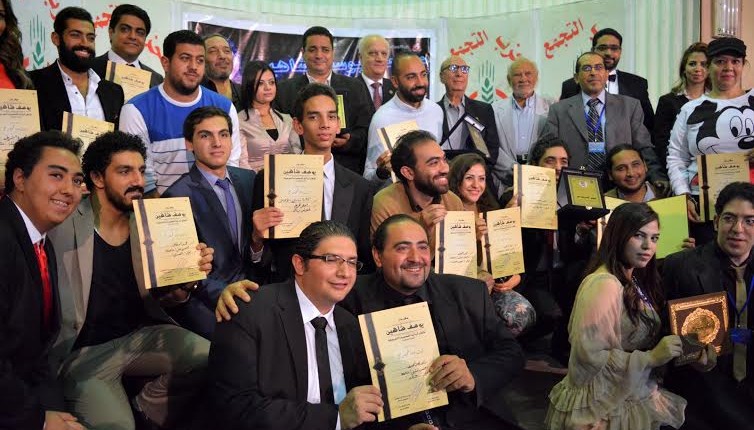 For a group of young teenage students, creating a fukn that qualifies for participation at a film festival is a dream come true. The lack of practical experience in the production process, the unavailability of financial support, and social taboos, make filmmaking as distant dream.

Not all young artists who are addicted to creating films are professionals, yet they still deserve a chance, just like the rest, to express their feelings, thoughts and beliefs. This is the main mission of the Youssef Chahine Film Festival organisers.

The festival is an annual event to showcase short independent films. For six consecutive years, it has succeeded in attracting youth who have basic experience at making films to apply in order to enhance their abilities at film production.

The festival is part of the Al-Tagammu Party’s culture section activities, supported by director Tony Nabih. It was named after celebrated director Youssef Chahine for his enormous efforts in creating the cultural committee within the party.

For about three months, the festival reviewed and approved films to compete in the competition if they meet 30% of the criteria to produce a film, and the film is less than 30 minutes long. Each year the festival has a theme based on the main events that took place that year. The Youssef Chahine Film Festival approved over 44 short films this year.

The independent festival is self-funded by the party. There are no concept rules or criteria for the participating films. All films related to politics, religion and sex, which are the main three taboos in Egyptian society, are allowed to freely participate in the festival without censorship. The judges believe that introducing daring films is the main element of creative people, so they cannot prevent youth from innovation. After the festival ends, a discussion takes place each week on the participating films.

Nabih is a prominent Egyptian director. He began his life as a student under Youssef Chahine, and directed many short films. His film ‘Sandok Khashab’ (Wooden Box) received more than 36 international awards.

Nabih believes the festival is one of the main stepping-stones for young artists to become known in Egypt. “Our festival has opened the gate for many youth to meet their audience and move to further steps in the world of fame.”

Not only films stars, but also directors and producers, acquired experience by participating in the Youssed Chahine Festival. “I feel so thrilled knowing that this festival supports young people to achieve their dreams,” Nabih said.

From his point of view, he teaches participants civilization by letting them discuss issues they are forbidden from discussing at other festivals or cinemas. “We are an independent festival so allowing people to discuss their perspectives about taboo topics in our society is one of the main objectives.”

Last year’s best film award went to a film which discussed the veil in Egypt. It portrayed a young girl from a low social class that was forced to cover her head just because everyone else around her did the same. The film tackled the idea of her relationship with God through daily messages she sends to him over social media. “The film dazzled me,” Nabih commented.

“Such a film would not achieve high revenues at cinemas if it was screened,” Nabih explained. “Because cinemas only screen regular films that are compatible with the society’s beliefs.” That’s why independent festivals give opportunities for unique films to see the light.

Another film that won the second best film at the festival this year featured a story of a transsexual boy, who is physically male but identifies as female. It portrayed how he deals with society while searching for his identity away from societal pressures.

‘Zanazeen’ (Cells) is another low budget film that tells the story of a young girl who is trapped in her own home by her mother who refuses to let her do anything she wants until she is married. “The creativity of this film shows how homes can turn into prisons for some girls by preventing them from doing anything they want just because they are not married,” said Nabih.

Mohammed won the best actor award several times at the festival. He believes he is not the only winner; “just the fact that we participated in this festival is considered winning,” he said. “This festival teaches us how to be hard working and fighters.”

In the film he took the award for, he played the main role of a man who tuns away from Upper Egypt because he does not want to be part of the chain of vengeance killings his ancestors died for.

“He is a man in agony, not knowing whether to run away or to stay and complete what he’s been taught to do,” he described.

Abdel Azim directed the film “Al-Kourtas”. The film discussed the future of books in Egypt, how people started to use them as papers to burn in fire instead of reading them, affecting the knowledge and culture of the youth.

“Participating in this festival was a dream of mine,” he said. “Even though I directed a film which took another prize at another festival, this prize is what I aimed for and dreamed for nights to achieve.”

What makes the festival different than any other is the notion that it is unbiased. This is why many youth know that winning at this festival means that they really deserve it, according to Mohammed.

When Nigar decided to do her friend a favour by participating in a film, she did not know she would receive the best actress award, for only three scenes she played. She plays a girl who is abused by her psychiatrist.

Mahmoud Abdel Aziz dies at 70, leaving behind a heritage of more than 84 films