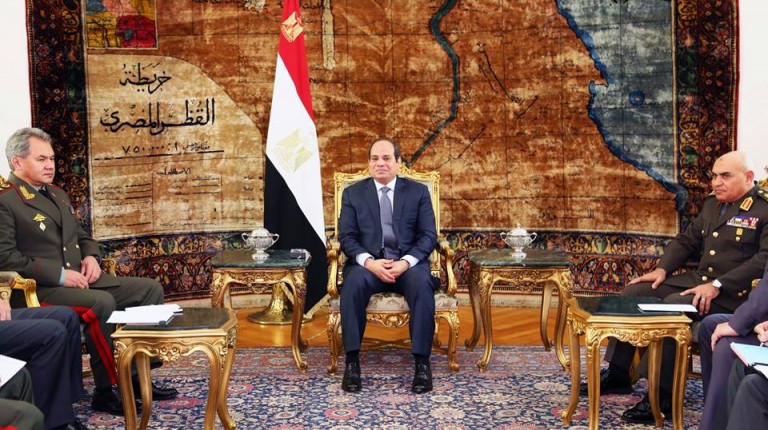 During the meeting, Al-Sisi stressed the importance to both nations of further collaboration in the face of various challenges, including fighting terrorism.

The Russian minister lauded the Egyptian role in pursuing stability in the region. He also stressed that Russia is keen to consult with Egypt about a number of regional issues, including counter-terrorism and the war in Syria.

Shoygu arrived in Cairo on Monday evening with a delegation of 26 officials at the start of a two-day visit.

Meanwhile, the Egyptian Minister of Civil Aviation met the head of the Russian investigative committee Alexander Bastrykin in Cairo, and the head of the international committee Ayman Al-Moqaddem. The two sides discussed co-operation on obtaining a conclusive outcome to investigations into the downing of a Russian passenger jet in Sinai on 31 October.

Bastrykin lauded Egyptian efforts in relation to the incident so far, asserting the importance of collaboration until the investigation has been fully concluded.

Egyptian Minister of Civil Aviation Hossam Kamal also held a meeting Monday with the directors of companies working under the umbrella of the ministry to discuss security plans for Egyptian airports.

Kamal stressed on applying all security measures in accordance with international aviation organisation standards.  He also urged for continuous collaboration with all the ministries.

He further discussed the mechanism of executing any other security measures requested by any air company.

Al-Sisi and Fahmy travel to Russia for high level talks