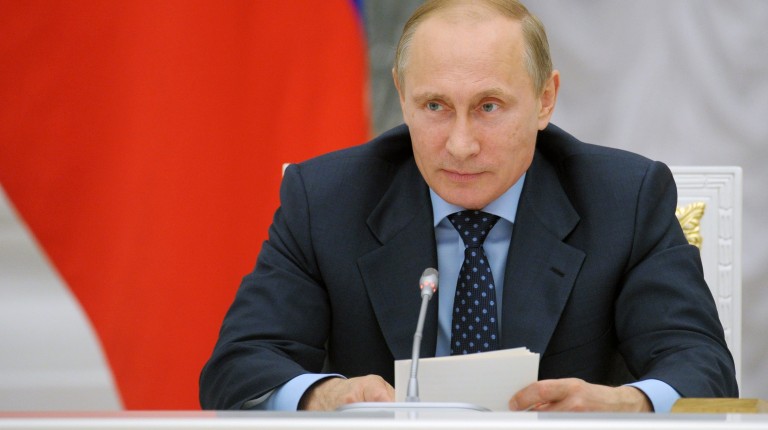 He added that the plane was targeting terrorist marks in the Latakia province of Syria, many of whom came from Russia.

Russia noticed there was a flow of oil to Turkey from the Syrian province under the control of terrorists, Putin continued.

“[Islamic State] now not only receives revenue from the smuggling of oil, but also has the protection of a nation’s military,” Putin said during a meeting with Jordan’s King Abdullah.

The two leaders discussed the anti-terrorist effort in Syria in addition to the diplomatic effort to start a political process in Syria.

The Russian Ministry of Defence confirmed earlier the crash of a Russian military Su-24 aircraft “as a result of an attack from the ground”.

The plane was at an altitude of 6,000 metres and the pilots’ fate has not yet been determined.

“A probe is in progress into the circumstances of the Russian plane’s crash. The Defence Ministry says the plane invariably stayed within Syrian airspace. Objective monitoring data confirm this,” Russian official agency TASS quoted the ministry as saying.

Turkey said the aircraft was shot down for violating Turkey’s airspace near its border with Syria. Turkish officials told the agency that the downed jet was “issued 10 warnings in five minutes and it was shot down by two F-16s”.

The Kremlin considers it incorrect to talk about any consequences for Russian-Turkish relations after the incident with Russia’s Sukhoi Su-24 warplane, TASS agency quoted Kremlin spokesman Dmitry Peskov as saying on Tuesday.

Peskov believes it would be wrong to provide any assessments, assumptions or make any conclusions before a full picture is made.

“We have to be patient; it is a very serious incident, but, again, without all of the information it is impossible to say anything and it would be wrong,” he said.

The Russian foreign minister was scheduled to visit Turkey on 25 November. Peskov did not comment on whether it will be cancelled. He further stressed that the plane was in Syria’s airspace.

French President Francois Hollande is set to meet his Russian counterpart this week to discuss collaboration in Syria.

Continuing its crackdown on possible terrorist attacks, French police found a device on Monday that resembled an explosive belt in Montrouge, an area in southern Paris.

The device was found in a garbage can which was stationed on a residential street. French police inspected the item, and sealed the area. It is not yet confirmed whether the item is an explosive belt or not. AFP reported that the device contained “the same materials as those used in the Paris attacks”.

Meanwhile, Belgium officials announced that more than 20 people were arrested on Sunday as part of the “manhunt for Paris attacks suspect Salah Abdeslam”, who is a Brussels barkeeper. However, on Monday, one of the suspects was charged terrorism, while the others were either released or are awaiting investigation.

A Russian death in Syria