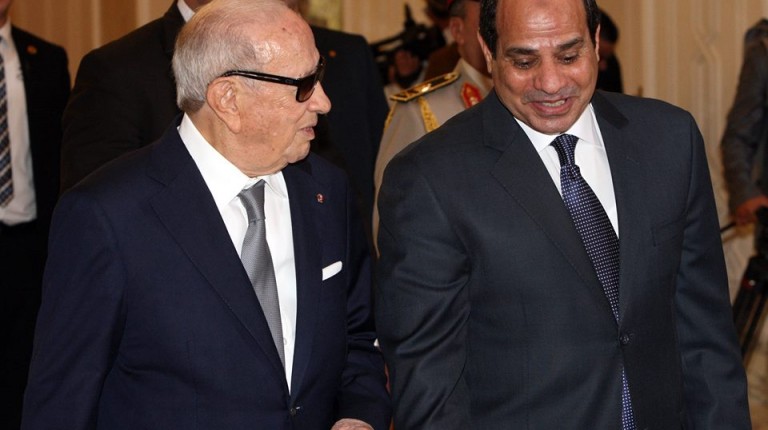 In an official press statement on Wednesday, the Egyptian presidency offered its condolences to the leadership, government and people of Tunisia regarding what it described as an “abhorrent attack”.

In statements to Daily News Egypt on Wednesday, Tunisian journalist Doha Taleeq confirmed the injury of four civilians in the blast. “A 13th body found is suspected to belong to the attacker,” she said.

The government has held various emergency meetings since the attack, including the Supreme National Council, which includes the interior and defence ministers, the prime minister and Tunisian President Beji Caid Essebsi.

“The prime minister announced that all laws related to security, such as the anti-terrorism law, will be strictly reinforced, as well as severe security measures being applied. He also called on the people to be understanding and cooperative,” Taleeq said.

Essebsi declared a nationwide state of emergency for a month following the attack. A curfew was imposed from 9pm to 5am in Greater Tunis, including the governorates of Ben Arous, Ariana and the city of Manouba.

Tunisian authorities are yet to issue information regarding how Wednesday’s bomb attack on presidential guards was executed, amid unconfirmed reports that a suicide bomber could have detonated a bomb near the bus.

A suicide bomber “wearing a coat and earphones” is suspected of blowing himself up near the door of the bus, Reuters reported, quoting a presidential official named Mahdy Al-Maghraby’s statement to Shems FM radio.

Another local station reported a source from the Tunisian Interior Ministry as saying that the bodies of 12 security guards had been identified, but a 13th “disfigured” body had arrived at the hospital later and was yet to be identified, according to the Tunisia Plus website.

According to Taleeq, the explosion was powerful, suggesting the possible use of military-grade explosives. “This is why I think the attack was done by “Islamic State” IS, probably executed by one of the ‘jihadists’ returning from Syria, and there are many of them in Tunisia,” she argued.

“Moreover, most terrorist groups, those who used to be affiliated to Al-Qaeda, switched positions and swore allegiance to IS after Al-Qaeda’s popularity decreased,” she added.

Meanwhile, Khabbab Abdel Maqsoud, an Egyptian journalist currently based in Tunis, told Daily News Egypt that damage was limited to the immediate area around the bus, with no damage caused to surrounding structures.

Taleeq said the Carthage Film Festival, which runs until 28 November, has not been cancelled, although the event’s director said there might be changes to the schedule in light of the curfew. Journalists said security precautions at the movie event were tight.

“There is rigorous searching at cinema entrances,” said Abdel Maqsoud.

Speaking to Daily News Egypt Wednesday, Tunisian journalist Magdy Al-Warefli said the location of the explosion, in Mohamed V Avenue, was critical. The area contains several key buildings, such as the Interior Ministry, which is just 100 metres from the blast.

“Mohamed V Avenue, where the blast took place, is a major street,” Al-Warefli explained. “The attack coincided with the ongoing Carthage Film Festival. So the area had a large number of security personnel and the state of security was supposedly at its highest,” he added.

“The police forces are not fully aware of the terrorism threat, nor the fact that the country is waging a war on terrorism and is on a state of alert. There is a lack of seriousness in handling this difficult task,” Al-Warefli said.

Speculating on how the attack was executed, Al-Warefli wondered why, if the attacker was indeed a suicide bomber, he did not pick a more important target.

“He could have walked straight to the Interior Ministry and would have killed hundreds of people,” Al-Warefli said, suggesting that the bomb may have been planted on the bus.

Journalists commenting on the attack said that Tunisia would not be able totally eliminate the chance of future attacks, which are difficult to detect.

“What Tunisia is trying to do now is to be more alert to things that were perhaps not considered cause for concern before,” Taleeq said.

“They cannot search every bag and backpack in the street,” Abdel Maqsoud said, adding that “the police are doing their best by stopping and searching people who seem suspicious.”