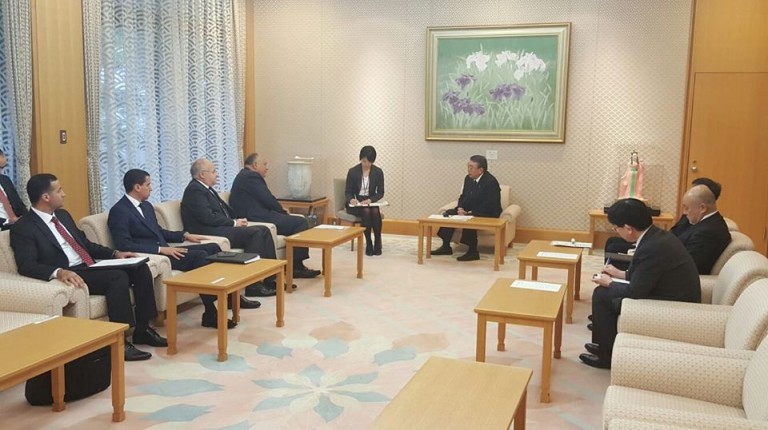 During his two-day visit to Japan, Foreign Minister Sameh Shoukry reviewed Egypt’s parliamentary elections with the Japanese Parliamentary head Tadamori Oshima, as the third and last step of the country’s political road map.

Shoukry is scheduled to meet with Japan’s Prime Minister Shinzo Abe and hold extensive talks with his Japanese counterpart, ahead of President Abdel Fattah Al-Sisi’s visit to Japan in 2016.

Oshima said he is looking forward to strengthening ties between his parliament and the upcoming elected Egyptian parliament.

According to Foreign Ministry spokesperson Ahmed Abo Zaid, settling talks with Japan, especially in developmental areask, is a top and timely priority for Shoukry as it will benefit a large segment of Egyptians.

He discussed with the JICA head in Japan the steps to complete several development projects in Egypt.

JICA has been involved in several projects in Egypt, such as the expansion of the Abu El-Reesh children’s hospital, the Grand Egyptian Museum Conservation Centre project (GEM), and the construction of the first phase of the metro’s fourth line.

In January 2014, the Chief Program officer at the Japan International Cooperation Agency (JICA), Mayada Magdy, announced that the organisation has finalised studies which aim to measure wind energy capabilities in the western area of Nile. Magdy’s announcement came during the Future and Investment Opportunities in New and Renewable Energy Conference on Tuesday.

On the sidelines of his visit, Shoukry was interviewed by several local Japanese media organisations and discussed Egypt’s role in countering terrorism, and the governmental efforts made to encourage foreign investments.