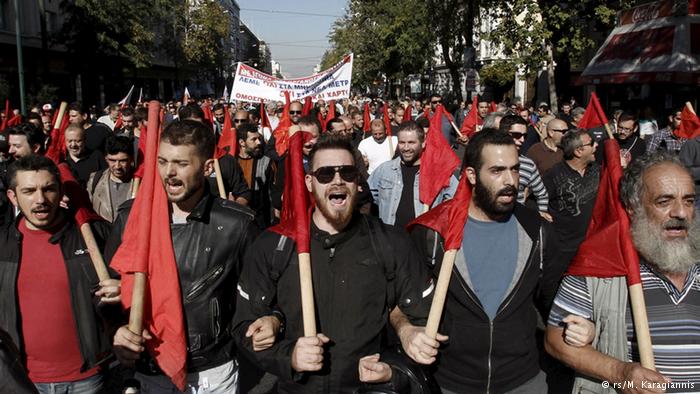 Public sector unions have called a general strike to be held next week against the planned overhaul of Greece’s generous retirement system. Last time more than 20,000 demonstrators took to the streets of Athens.

As thousands of Greek pensioners demonstrated in central Athens on Thursday against cuts demanded under an international bailout, the public sector union called its second nationwide anti-austerity strike in under a month.

The biggest public and private sector unions, representing about 2.6 million workers, plan a 24-hour strike against the pension reform on 3 December .

The unions brought thousands to the streets earlier this month in the biggest domestic challenge to Prime Minister Alexis Tsipras since he was elected in January.

In July, Greece’s leftist government was forced to accept a three-year, €86bn ($93bn) EU bailout to keep the nation from crashing out of the eurozone, a rescue that came with strict conditions.

In addition to tax hikes already adopted, Greece has pledged to overhaul its shaky retirement system that is facing imminent collapse. The government has already passed legislation raising the retirement age, increasing health care contributions and scrapping most early retirement benefits. It also plans to merge several pension funds into one and cut back on supplementary pensions.

The last general strike over austerity cuts was held on 12 November , with over 20,000 people demonstrating in Athens and sporadic violence breaking out between police and hooded youths, who vandalized public property.

Greece’s economy is forecast at best to stagnate this year and contract mildly next year.

The government’s majority has shrunk to just three seats as it pushes through the latest set of austerity measures but, in return, it has received money from the euro zone to recapitalize its four biggest banks.