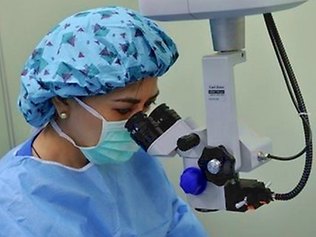 Cancer has always been portrayed as a frightening monstrous illness that people will definitely die of. This stereotype has been often portrayed in Egyptian films, where the hero who gets any form of cancer would become ill and suddenly die, as if cancers are not treatable and inevitably lead to death.

Doctors highly condemn that negative image of cancer, said National Cancer Institute OncologistMostafa El-Serafy in comments to Daily News Egypt. Cancer is like any other disease and patients can easily live with it and can also be cured.

El-Serafy, who also serves as President of the Egyptian Society for Oncology, noted that mass media is highly responsible for marketing false information and concepts that are not based on scientific evidence. For instance, it is widely believed that specific foods can cause cancer, such as potato chips and foods that include preservatives, but these ideas are false and these types of food do not lead to cancer.

El-Serafy added that cancer is not infectious, like HIV, contrary to what many people believe. He said cancer mostly affects older people. It widely affects people in their 50s and over 50s. The percentage of children who get cancer is very low and does not exceed 2%.

El-Serafy called for eliminating the fear and “phobia” from the disease, as cancer is not a highly dangerous disease.

Professor and Head of the Department of Oncology at the National Institute of Oncology, Heba El-Zawahry told Daily News Egypt that early detection of tumours largely contributes to the treatment of cancer, as recovery rates in breast colon, liver, and pancreas tumours in early stages are more than 90%.

El-Zawahry added that the stereotype of cancer being a terminal disease that cannot be cured should be changed. On the contrary, it is a disease like any other disease and be fully cured.

Professor of Oncology at the National Institute of Tumours, Khalid Hussein, also said early detection plays a pivotal role in reaching high cure rates, pointing out that in its infancy the disease can be controlled and you can live with it easily.

Hussein, who was previously minister of higher education, added that Egypt is now on the edge of the Red Belt, as the rate of cancer in Egypt is less than the US. However, the late discovery of the disease is a drawback, unlike the US, which has early detection and thus a high cure rate.

The doctor highlighted the importance of raising awareness on cancer and all concerned authorities in Egypt are responsible in this regard. However, US citizens are more aware and conduct regular examinations, leading to early detection of cancers.

Khaled said cancer is a disease that can attack any part of human body. If someone continuously coughs and cannot find a cure through medication, or when someone has blood in their urine that cannot be cured by medication, then specific tests and examinations should be done to detect cancers. Khaled confirmed that minor symptoms should not be ignored. Further, if a woman finds any changes in the shape of her breasts, she should consult the doctor immediately.