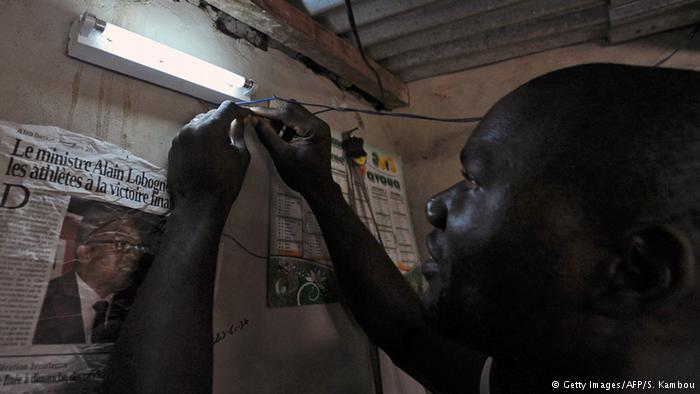 Almost two-thirds of people living in sub-Saharan Africa have no access to electricity. Even those who are connected to the grid often find themselves struggling with blackouts. In 15 years, this could change.
In Zimbabwe, a country of 14 million people, the past two months have seen power outages that last sometimes 20 hours a day.

Ethiopia, one of the biggest energy exporters in Africa that also services neighboring Kenya, Sudan, and Djibouti, is almost constantly battling with outages.

It would be an understatement to say the electricity grids in Africa are unreliable. Even people who are already connected to a network do not have regular access. And there are still 600 million people on the continent who have no access to electricity whatsoever.

That might be about to change. One of the United Nation’s Sustainable Development Goals stipulates that by 2030 at the latest, every person in the world should have access to affordable and reliable energy.

It’s not just the United Nations which is prioritizing energy development. Akinwumi Adesina took over as head African Development Bank Group (AfDB) in September, and announced a “New Energy Deal for Africa”: By 2025 – just ten years from now – he wants to find a way to supply the entire continent with electricity. The estimated annual cost could could be upwards of $55 million (52 million euros).

Bringing energy to Africa is a hot topic these days. In June, the African Union decided to establish a special committee to coordinate all the energy for Africa initiatives and their funding. The same month, the G7 also decided to make the electrification of Africa one of their priorities. Ministers at the G20 meeting in October followed suit.

Britain has established its own initiative to bring power to Africa. The United States founded its own program in 2013, but any hope of progress was quickly dashed: two years later, not a single megawatt of energy has been delivered anywhere.

Networks too old and unstable

Africa’s power supply grid has many pressing problems: existing networks are hopelessly out of date; too little electricity is produced for the far too many households that are wired up to the network.

The African climate can also be fickle. If it doesn’t rain enough, water levels fall, and hydroelectric plants cannot produce to full capacity. However if it rains too much, then the ramshackle power lines can suffer water damage. The networks are so overloaded that they would collapse completely if they weren’t temporarily shut down in selected areas.

These problems are not new. The question is why so little progress has been made in fixing them. “For so many years we’ve been lacking the political will,” said Max Bankole Jarrett, the Deputy Director of the Africa Progress Panel, a lobbying organization with several famous members such as Kofi Annan and Olusegun Obasanjo.

“In some cases, politicians don’t see the problem for what it is,” he said. And so nothing happens, not because it’s not feasible to do so, and because energy distribution and energy development are not priorities.

Hardly any public investment in energy

Adam Kendall, a South African consultant with McKinsey, said there is not enough state or public funding for energy investment in Africa. Governments expect the private sector to take the lead. This doesn’t happen often enough. “In many African countries the environment for investment isn´t actually appropriate,” Kendall said. “This prevents the private sector from coming in.”

Kendall also refers to risks such as fluctuating fuel prices and the unwillingness of governments to pay fair prices for electricity.

One common excuse for inefficiency across Africa is corruption. “Electrical works have definitely been used in many countries for cronyism,” Bankole Jarrett said. Middlemen let money that was intended as subsidies for generators or gasoline simply disappear.

But both experts said that in the energy sector, corruption is not the worst problem. The bigger issue is simply politics, said Kendall. Electricity suppliers depend on the government to decide which cities will be connected to the power lines. Often these end up being cities that are most strategically important for the next election, not those with the most need.

The need for political will

It’s ambitious, to say the least, for the AfDB and the United Nations to want to grant every African access to electricity by 2025 or 2030. According to the McKinsey report “Brighter Africa,” 80 percent of Africans won’t have electricity until 2040 at the current rate of development.

Kendall believes the urban areas could be mostly or at least partly electrified by 2030.

How bad is corruption in Africa?