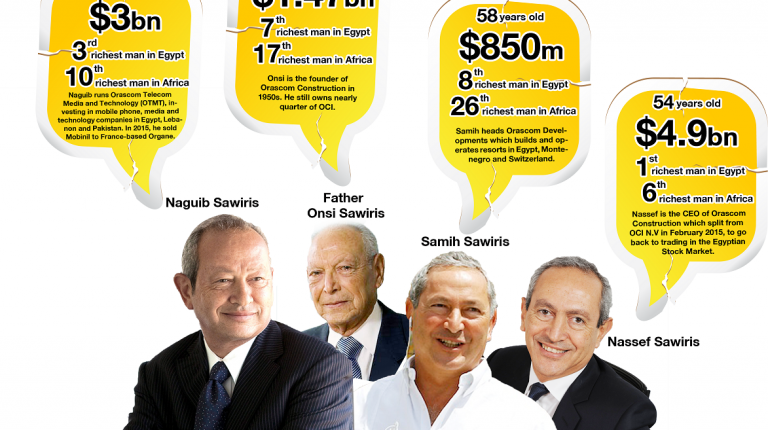 A father and his three sons have made their way to being listed among Egypt’s and Africa’s ten richest men. The journey of Onsi Sawiris and his three sons, Naguib, Samih, and Nassef, started in the 1950s when Onsi started operating in the construction and industry sectors.

In 1976, Onsi founded Orascom Onsi Sawiris & Co. as a trading and contracting company. The company continued to grow by Onsi’s and his sons’ efforts, who established themselves as leading private sector investors in the construction, hotels, telecom, and media sectors.

Orascom Group took a leap in 1998 when it was converted from a limited partnership firm to a stock market-listed company and renamed itself to Orascom Construction Industries SAE.

Naguib Sawiris is the family’s political entrant. Following the 25 January Revolution in 2011, he founded the Free Egyptians Party. He also expressed concern over the Syrian refugee crisis and had offered in September to buy an island in Greece or Italy to help the thousands of Syrians fleeing their country, seeking a good living in Europe.

“Greece or Italy can sell me an island and I call its independence and host the migrants and provide jobs for them to build their new country,” he said on Twitter. In a later interview, he explained that the island could cost up to $100m.

“There would be temporary shelters to house those people, then one can start employing the people to build housing, schools, universities, hospitals. If things improve, whoever wants to go back (to their homeland) can go back,” Sawiris said in a Forbes interview.

Rise of the Sawiris empire

Orascom established itself as a leading company in the market throughout the years. In the mid-1990s, Onsi Sawiris transferred the management control to Nassef, who diversified the investments of the company to the cement and building materials markets.

The listing of Orascom Construction Industries in the Egyptian Stock Exchange (EGX) in the late 1990s, with the value of $600m, made the company the largest in the stock exchange.

Positive earnings from the listing helped the company expand to other markets, such as Algeria and Tunisia, with a significant presence in Qatar. This put the company among top 225 ranked International and Global Contractors by Engineering News Record for the first time in 2003.

Further expansion was strengthened by OCI, acquiring a 50% stake in the BESIX Group, which has a powerful presence in Europe and the Gulf. It was awarded, in a consortium, the contract to build the world’s tallest building Burj Khalifa in Dubai, UAE.

At the time OCI was booming, other Orascom companies were also registering successful steps. Naguib’s Orascom Telecom was introducing the first local mobile operator company Mobinil to the Egyptian market.

Furthermore, Samih’s Orascom Development was also on the rise. His company developed hotels, villas, golf courses, and marinas, putting the company’s assets at more than 30 hotels and eight resorts.

In October, NNS Holding investment group, of which Nassef is director, announced acquiring 6% stakes in German sportswear brand Adidas, the largest single stake in the company.

Nassef’s OCI NV also announced in August tying the company’s US and European assets up with leading US-based fertilisers company CF Industries Holdings in a transaction valued at $8bn.

The acquisition, which includes OCI’s distribution networks, would create the world’s largest nitrogen fertiliser company, with 12m nitrogen-equivalent nutrient tonnes of production capacity by mid-2016, according to the company.

Upon completion of the transaction, OCI would own approximately 27.7% of the new company and CF shareholders would own the remaining amount, approximately 72.3%. It will then distribute a large proportion of the shares received in the merged company to its shareholders. Both companies are expected to achieve nearly $500m in after-tax annual run-rate synergies from optimisation of operations, capital, and corporate structure.

OTMT’s share of the offer, at 162m shares of Beltone, is 87% and Act controls the remaining 13%. The transaction value is estimated at EGP 650m. Both companies will prepare the required contracts to close the deal.

In a similar move, OTMT agreed in September to buy all shares of Bluestone (Holland) Investment BV, a subsidiary of Victoire Invest Holding.

In February, OTMT sold its 5% direct stake in Mobinil. It also sold its voting rights in MT Telecom, the holding company of Mobinil, to the French company Orange for $233m. Last week, OTMT also announced it decided to deconsolidate Koryolink, making it an associate instead of a subsidiary.

OTMT’s head of investors’ relations department Marawan Hussein denied the nationalisation of Koryolink by North Korea’s government. He said there are ongoing negotiations to merge Koryolink with a state-owned mobile services operator in North Korea.

Naguib said the company’s pending issues will be resolved, noting that he was forced to deconsolidate Koryolink from the company’s financial statements.

In December 2014, ODHN AG, the major shareholder of Orascom Hotels and Development (OHD), announced it would offer 10%-15% of its stocks in OHD through a private and public placement in the Egyptian stock market.

Onsi’s construction company, founded in 1950 in Upper Egypt, was crippled by the nationalisation under the rule of the late socialist president Gamal Abdel Nasser in 1961, leaving Onsi no choice but to flee to Libya to establish his construction career there.

After several years, Onsi returned to Egypt in 1976, where he founded the first Orascom firm. Fifty years later, the same fate awaited his son, Naguib, but this time the challenge was taxes not nationalisation.

Following the election of ousted Islamist president Mohamed Morsi in 2012, Naguib travelled to the UK, where he spent there for a few months, as a result of being targeted by the Tax Authority, which requested billions of dollars from the Sawiris family in tax arrears.

Naguib then returned in May 2013, one month before the popular uprisings of 30 June in 2013, which ousted Morsi from power with the help of then-defence minister Abdel Fattah Al-Sisi.

During that period, the tax authority reconciled with the multi-billionaire Sawiris family and the dispute was settled by agreement to pay a little over $1bn over a five year period, with an immediate payment of $357m.

The government at that time did not seem to want to lose Naguib and he was greeted by an envoy from the presidency, giving a positive message to businessmen.

Naguib nonetheless remained an opponent of the Muslim Brotherhood regime and was a main supporter of the 30 June popular uprisings. Days after Morsi’s removal, the eldest brother Naguib announced he and his family will pump billions of dollars worth of new investments into Egypt, particularly in the industrial and tourism sectors.

Recovery of stock market depends on stabilising US dollar at EGP 12: Beltone Financial