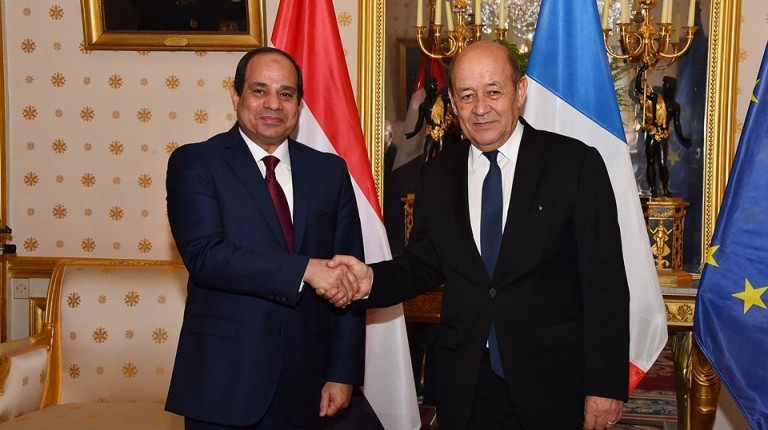 Egyptian president Abdel Fattah Al-Sisi has met with several French and international officials on the sidelines of the United Nations climate conference in Paris, known as COP21, agreeing to boost cooperation with France in light of recent events.

In a meeting with French Defence Minister Jean-Yves Le Drian, Al-Sisi expressed his condolences for the victims of the recent Paris terror attacks, stressing that Egypt stands with France in fighting this challenge.

According to a statement released by the Egyptian presidency, Al-Sisi lauded the level of cooperation between Egypt and France, especially on military matters. Earlier this year, France supplied Egypt with the first three of a consignment of 24 Rafale fighter jets, and agreed to supply two Mistral naval vessels.

The Egyptian president and the French minister agreed to increase military cooperation in order to fight the rise of the “Islamic State” terrorist organization. They discussed the latest developments the MENA region, in particular the ongoing conflicts in Syria and Libya.

Al-Sisi reaffirmed the importance of the joint efforts to combat terrorism in Africa, where some terrorist groups are gaining ground in the wake of several terror acts witnessed in some African countries.

He also met Éric Trappier, the CEO of Dassault Aviation, the French company responsible for delivering the Rafale fighter jets.

Trappier expressed his hopes for continued collaboration with Egypt in various fields, and stressed Egypt’s role in achieving stability in the Middle East.

In a separate meeting with Angel Gurría, the Secretary General of Organisation for Economic Co-operation and Development (OECD), Al-Sisi said Egypt is keen on collaborating with the OECD in preparing development studies, particularly in the field of investment, enforcing governance and transparency, and effectively managing aid.

Gurría lauded the Egyptian Economic Reform Plan that was revealed at the Egypt Economic Development Conference in Sharm El-Sheikh, which introduced new investment opportunities in Egypt to international companies. He further praised the new economic projects that Egypt is launching, especially in the Suez Canal region.

According to a statement released by the presidency, Al-Sisi also met with UNESCO Director-General Irina Bokova in Paris. The Egyptian president expressed his appreciation for the recent efforts undertaken by UNESCO to improve Egypt’s capacity to secure Egyptian museums and archaeological sites, in addition to its role in assisting the Egyptian government in the restoration of archaeological sites that were affected by terrorist attacks.

“El-Sisi expressed Egypt’s keenness to further enhance cooperation with the UNESCO. He also expressed Egypt’s readiness to contribute to a number of initiatives recently launched by the organization in the fields of education and heritage, which are consistent with Egypt’s efforts to elevate the educational and cultural levels of Egyptian society, as well as to provide the young people with the needed knowledge to lead development in the country,” the statement read.

Bokova acknowledged the role and contributions that Egypt makes to UNESCO’s activities, which reflects its historical and cultural influence. She also expressed hope that cooperation between Egypt the UNESCO would be enhanced in the near future to preserve Egypt’s monuments and cultural legacy.