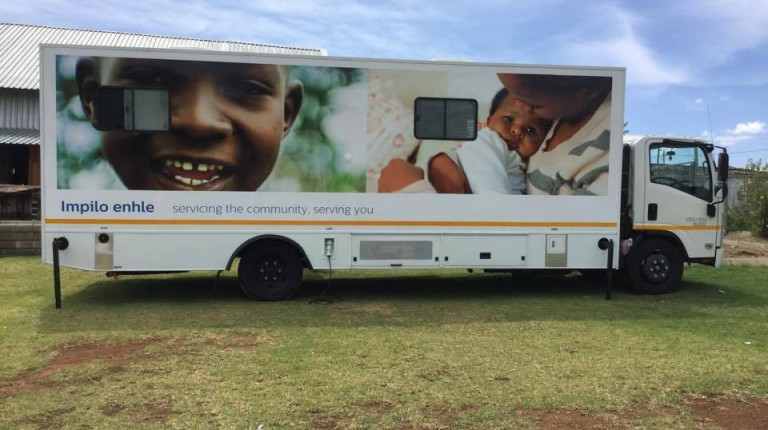 In the beautiful modern city of Johannesburg, one can see evidence of the advanced state of development achieved in this part of Africa. Both beauty and high levels of development can be seen in various parts of the city, from the clean streets and modern transport system to the fine architecture and expensive goods on display.

However, not so far from this modern face of Johannesburg, are communities living in quite different circumstances, and Daily News Egypt had an opportunity to visit them recently.

Approximately 10 km from the glitzy shopping district of Sandton, one finds the densely populated and impoverished township of Diepsloot. The journey between the two areas is essentially a journey between two civilisations within one country.

From the smooth well-structured streets, we moved to narrow bumpy streets. Leaving behind luxurious beautifully organised buildings, we found tiny shops and houses surrounded by garbage and dirt.

Around 350,000 people live in Diepsloot, with access to only two medical clinics. Patients in need of treatment had to stand in long queues to see a doctor, and in many cases the treatment they required was not forthcoming.

In response to the medical needs of the community, electrical goods company Philips – in cooperation with donors such as the Rhiza Foundation, IDC and Nozala – is running a mobile clinic in the township, providing primary healthcare for pregnant women and children.

Since it began operating in July 2015, the clinic has helped around 1,000 people each month.

“There is a need for mobile and very basic access to primary healthcare to save lives of people, so these are concepts that could easily be translated in the context of Egypt or Algeria or Morocco or wherever,” said Radhika Choksey, group communications chief for Philips in Africa.

According to Choksey, the government’s collaboration is essential for carrying out such a project in Egypt, and Philips, as the technology provider, has partnered with others in running a similar project in Kenya.

Furthermore, Jose Fernandes, general manager at Philips in South Africa, said that the private healthcare system in South Africa serves only 16% of the whole population, those who typically have a formal job and are covered by medical insurance.

South Africa is now exploring a national health insurance system that will provide healthcare to the whole country, a project set to be accomplished within 15 years, according to Fernandes.

“Implementing projects such as the mobile clinic in the meantime can help cover the disparity. That’s why projects like this are so crucial during this bridging period to support the public sector where resources are really scarce,” Fernandes explained.

Diepsloot suffers from 75% unemployment, and those who do have jobs are mostly scraping by on low-incomes, according to a Rhiza Foundation representative.

The visit to Diepsloot was part of the Philips Innovation Experience, which took place in Johannesburg in late November. Media representatives from across Africa were brought together to witness a number of Philips’ collaborations in terms of community development and product introductions to South Africa.

Investing in Egypt is right decision for Philips: Managing Director of Personal Health