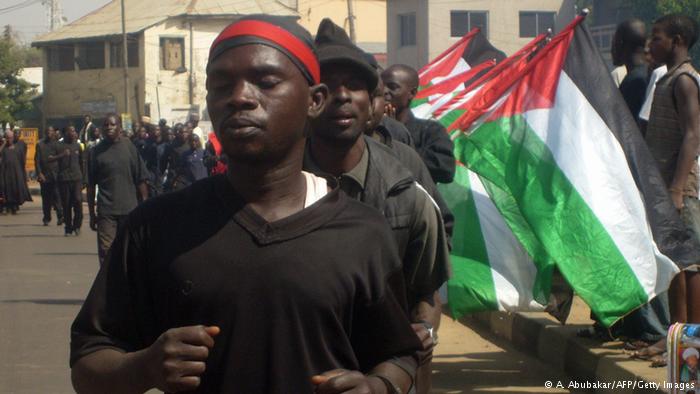 Among the millions of Shiite Muslims marking Arbaeen, an important fixture on the Islamic calendar, are pilgrims in Nigeria. They intend to join the final stretch of a pilgrimage despite the terrorist threat.
They come from northern Nigeria, Ghana, Chad, Cameroon, Benin and Togo. Clad from head to toe in black, they have been walking together in large groups for days. The pilgrims’ destination is the city of Zaria in Kaduna State, northern Nigeria, where they were set to be addressed by Shiite cleric Ibrahim Zakzaky.

On Arbaeen, Shiites honor the memory of Imam Hussein, grandson of the Prophet Muhammad, who was killed in the year 680. His mausoleum lies in Kerbala in present-day Iraq and attracts millions of devotees every year. Religious observation peaks on the 40th day after the anniversary of Hussein’s death.

“This is the key ritual event of the year for Shiite Muslims, rather like Christmas for Christians” said Professor Roman Loimeier, an expert on Muslim communities in Africa at the University of Göttingen in Germany.

For West African Shiites, Kerbala is a very distant destination for a pilgrimage. They travel instead to Zaria. Mohammed Mukhtar Sahabi, Shiite leader in Kaduna, told DW he is glad he is able to join the pilgrimage. “We thank God that we are members of the generation that loves Imam Hussein and mourns his death,” he said. Hussein was with his family when he was killed. “We will also be with our families and children during the procession,” he added.

Shiites such as Mohammed Mukhtar Sahabi are a minority among West Africa’s Muslims. Most West African Muslims are Sunnis, who, globally, account for 80 percent of all Muslims. Loimeier estimates that just one percent of Nigeria’s Muslims are Shiites. There is no deep-rooted Shiite tradition in the region. Their arrival can be explained by a relatively recent historical event, the 1978-1979 revolution in Iran, which sent shock waves through West Africa’s Muslim communities. Zakzaky, the Nigerian Shiite cleric, was an enthusiastic supporter of the revolution and spent a considerable amount of time in Iran.

“The first pro-Iranian groups and, at a later date, Shiite groups emerged in Nigeria and in other parts of West Africa in the 1980s as a result of such contacts with Iran,” Loimeier said. These groups include Nigeria’s Islamic Movement, which Zakzaky leads and is mostly, though not exclusively, Shiite.

The Shiite community in Nigeria has tens of thousands of members and is the largest in West Africa. Its influence extends to other countries in the region such as Ghana or Senegal.

Last Friday (27.11.2015), a Shiite procession near the city of Kano in northern Nigeria was targeted by a suicide bomber. Clad in black, like members of the procession, the bomber ran into the crowd and detonated his explosives. 22 people were killed; a second suspected bomber was arrested. Boko Haram, the Sunni jihadists, who want to create a hardline Islamic state in northern Nigeria, claimed responsibility for the blast.

Loimeier says Sunni Muslims in sub-Saharan Africa have no fund of historical co-existence with the Shiites upon which they are able to draw during daily life and religious observance. They regard the Shiite movement as a provocation and consider their rituals insulting. This may help to explain the hostility between the majority Sunnis and minority Shiites. But Loimeier cautions against sweeping generalizations. “There are groups within the Sunnis that don’t have any issues with the Shiites,” he said. “But the radical Salafists view the Shiites with particular enmity, not just in northern Nigeria but in other parts of the Islamic world as well.”

The Shiites have other opponents as well. “Boko Haram are merely the most militant,” Loimeier said. Others include the more moderate Salafists and – in previous times – the Nigerian state, which arrested and imprisoned Zakzaky on several occasions. But it would appear that those days are now gone, because there is now a Shiite minister in President Muhammadu Buhari’s recently-appointed cabinet.

Pilgrims in northern Nigeria say they will not let last week’s suicide bombing deter them from taking part in Thursday’s (03.12.2015) procession. Observers say that numbers have even swelled out of solidarity with the Shiites. Members of other confessions are joining in, such as the Christian clergyman Ioanna YD Buru, who runs a Peace and Reconciliation Foundation. “I want to build bridges between Muslims and Christians,” he said. He darts back and forth among the weary pilgrims offering them a drink of water.

Security has been tightened. Mallam Abdulmumini Giwa, a spokesman for Zakzaky’s Islamic Movement, is reasonably confident all will go well. He notes that while a first bomber was able to carry out his deadly mission last Friday, a second was apprehended before he could detonate his explosives.

Ibrahima Yakubu contributed to this report