Negotiators and activists are getting increasingly serious about the prospects of finalising a carbon-cutting deal here in Paris. No doubt if they are successful, we will see much back-slapping and exhortations of “success” in seven days. But the bonhomie will hide a rather inconvenient truth: even if it’s successful, any deal negotiated in Paris is going to do very little to rein in temperature rises.

In a recent peer-reviewed research paper, I looked at all the carbon-cutting promises countries committed to ahead of Paris (their so-called “Intended Nationally Determined Contributions” or INDCs) for the years 2016-2030. These are what the global treaty will be based on (along with a bunch of hot air about what might happen outside those dates – something that is easy for politicians of today to talk about, but that we just cannot take seriously).

And even if every government on the planet not only keeps every Paris promise, reduces all emissions by 2030, shifts no emissions to other countries, but also keeps these emission reductions throughout the rest of the century, temperatures will be reduced by just 0.17°C (0.3°F) by the year 2100.

And let us be clear, that is incredibly – probably even ridiculously – optimistic. Consider the Kyoto Protocol, signed in 1997, never ratified by the US, and eventually abandoned by Canada, Russia and Japan. After several renegotiations, the Kyoto Protocol had been weakened to the point that the hot air left from the collapse of the Soviet Union exceeded the entire promised reductions, leaving the treaty essentially toothless.

The only reason any of the Kyoto goals were almost achieved was the global 2008 recession. Moreover, emissions were just shifted from one country to another. The EU, the most climate-engaged bloc, saw an increase in its emission imports from China alone equalling its entire domestic CO₂ reductions. In total, 40% of all emissions were likely shifted away from the areas that made promises.

Of course, Paris has been talked up by the likes of the UNFCCC’s Christiana Figueres, very busy here in Paris, who says: “The INDCs have the capability of limiting the forecast temperature rise to around 2.7 degrees Celsius by 2100.”

That entirely misrepresents reality. The 2.7°C essentially assumes that although governments do little in Paris then right after 2030 they will embark on incredibly ambitious climate reductions, thus getting us to 2.7°C. That way of thinking is similar to telling the deeply indebted Greeks that just making the first repayment on their most pressing loans will put them on an easy pathway to becoming debt-free. It completely misses the point.

Figueres’ own organisation estimates the Paris promises on the table will reduce emissions by 33Gt CO₂ in total. To limit rises to 2.7°C, about 3,000Gt CO₂ would need to be reduced – or about 100 times more than the Paris commitments. 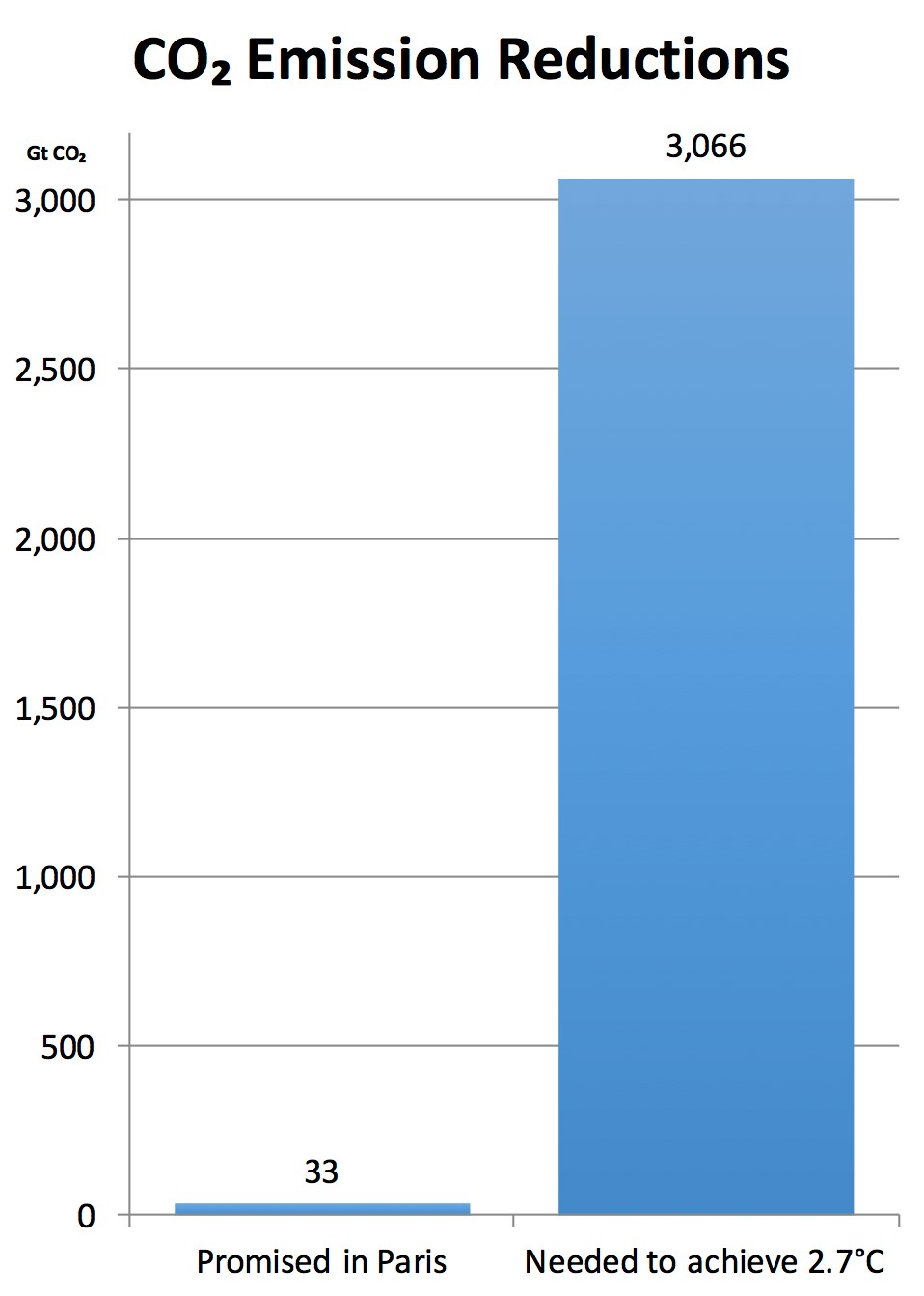 Negotiators here in Paris are trying to tackle global warming in the same way that has failed for 30 years: by making promises that are individually expensive, will have little impact even in a hundred years and that many governments will try to shirk from.

The real goal here is not to negotiate a deal, it is to make an impact on temperature rises. This approach did not work in Kyoto, it did not work in Copenhagen, it has not worked in the other climate conferences or international gatherings. And regardless of any declarations of success, it is not going to happen here in Paris.

Bjorn Lomborg is Director of the Copenhagen Consensus Center and Visiting Professor at Copenhagen Business School. He researches the smartest ways to help the world, for which he was named one of Foreign Policy’s Top 100 Global Thinkers. His numerous books include The Skeptical Environmentalist, Cool It, How to Spend $75 Billion to Make the World a Better Place and The Nobel Laureates’ Guide to the Smartest Targets for the World 2016-2030.