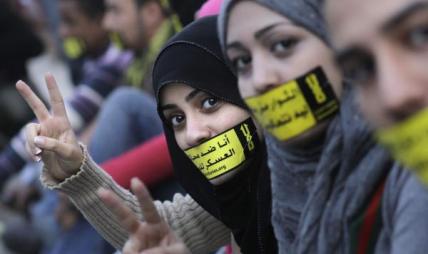 A total of 425 civilians appeared before Egyptian military courts in November, according to the monthly report from the Lawyers for Democracy Initiative, released on Thursday.

According to the report, the 425 individuals appeared in seven cases, with 44 people sentenced by military courts to three different verdicts in November.

The same report notes 55 violations of freedom of expression, including media freedom, during the same period, 33 of which involved coverage of the second round of the parliamentary elections. These violations varied from censorship to arrest, according to the report’s authors.

They included the three-day detention of investigative journalist and legal activist Hossam Bahgat by the military prosecution on 8 November and the arrest of researcher and reporter Ismail Alexandrani by State Security upon his arrival at Hurghada Airport on 29 November.

November also witnessed 88 demonstrations by different political factions, 19 of which were dispersed by security forces. The Arab Network for Human Rights Information (ANHRI) specifically reported an increase in police abuse in detention areas.

Such abuses led to the death of 13 people in November alone, according to El Nadeem Center for the Management and Rehabilitation of Victims of Torture, with cases sparking protests in Luxor and Ismailia.

Members of the Muslim Brotherhood and National Alliance Supporting Legitimacy were tried in a variety of cases, among them the so-called “Maspero Events” and “Rabaa Operations Room” cases. Twelve citizens were also sentenced to death on four different charges.

Also documented were 12 terrorist attacks across the country.

The Lawyers for Democracy Initiative was launched in 2014 by the Arab Network for Human Rights Information and consists of a group of lawyers from various parts of Egypt who seek to monitor events and cases that impact on the path to democracy.

The Cairo-based initiative released nine reports in 2014, and the November 2015 report is the ninth this year.