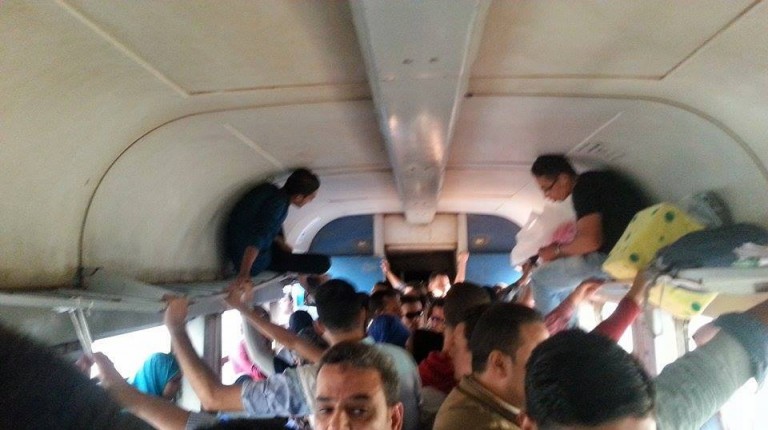 Editor’s note: This story is part of a special reporting project, “What Lies Beyond”. It features students across six universities reporting in-depth stories and investigations on many of Egypt’s current events and issues.

It was 3pm on the first day of the academic year, a rush hour in the city of Beni Suef for many students and employees who travel back to their homes in other cities on the Upper Egypt train, dubbed as the ‘Class C’ train.

Talaat Adel, a student from Minya, came to Beni Suef University to study business; he used to take the Class C train everyday for about two hours. One day, as he rushed into the crowd in attempts to catch the train following a long academic day, he ended up with a broken leg.

“As soon as the train showed up on the platform, I ran towards it so I can find space inside. At the moment I managed to catch the train and prepared to get inside the car, I tripped on someone. The train was still moving slowly as it prepared to stop, so I automatically fell in the gap between the platform and the train,” Adel told Daily News Egypt at his home in Minya.

“No one could pull me up from where I fell, until the train had completely stopped, so I was dragged along the entire platform,” he added.

Adel survived, but took two months to recover from his broken leg. He is among 15 others who had similar accidents, but unfortunately succumbed to fatal injuries. Five other people were injured in 2015, as they were dragged under the train’s wheels due to the unimaginable crowd at the train doors. Passengers suggest the numbers of casualties and injuries are much higher; however those numbers are the ones officially announced.

The accidents are mainly due to the intense overcrowding, with many people preferring to hang on outside the train cars to avoid the suffocating crowds within. Dozens fall off whilst standing between the cars of the train.

“There is no space to go inside, it’s impossible. I wish I was able to sit inside, it’s safer for me but I can’t,” said Adel, noting that the train doors often do not close because of the crowding and people getting off and on at every station.

Despite slight differences in experiences with the Class C train, all passengers interviewed agreed they witnessed at least two or three other accidents where passengers fell off the train and died immediately.

Mahasen Oweis, a student from Alexandria who goes to Beni Suef every day for university, was diagnosed with lung inflammation.

“It is because of people smoking on the train amid this intense crowd. I went to the doctor and he said it is probably from smoking, but I do not get exposed to cigarettes smoke except on this train,” she said.

Meanwhile, during the seven-hour trip, Oweis said she struggles with the severely poor hygiene in the train bathroom.

“I try not to eat or drink during the entire trip because those bathrooms are inhumane. Despite the long distance, I would never use it. With its doors open and no drainage, it is not even suitable for animals,” she said.

Many of the stranded passengers who could not find a seat occupy the small bathrooms at the end of the cars, which simply comprise of holes dug into the train floor. They also pay tickets for the trip.

Mohamed Shabaan, from Al-Fashen district of Beni Suef, highlighted another problem with the train, which is the schedule. “It is supposed to arrive in Al-Fashen at 7am, but when it comes early, it is usually around 8am from Minya with 600 people already occupying the cars,” he said.

Shabaan said the only advantage of taking the Class C train is the low ticket price, claiming it is much lower than other transportation methods. A one-way ticket on the train costs EGP 6.

“The one-way ticket from Al-Fashen to Beni Suef using other transportation methods, such as microbuses, costs EGP 15. This means I will have to pay around EGP 500 monthly. It is a lot as my father’s salary average is EGP 1,200 and he has to afford my siblings’ expenses as well,” Shabaan said.

In addition to the cost issue, train passengers avoid taking other transportation methods because there are no direct routes available from their homes to other cities, and drivers refuse to move unless their vehicles are entirely full.

Several solutions to resolve the issue were given by citizens and officials. A student from Benha launched a Facebook page to shed light on the day to day rides taken on those trains, by crowd-sourcing images and videos from passengers and republishing them. The page, which was launched five years ago and has drawn at least 20,000 likes so far, also discusses potential solutions.

Speaking on condition of anonymity, the student said: “The main problem lies in the number of cars for every train and the scheduled trips. The ideal number of cars should be 12 [instead of nine], especially during rush hours.”

“Also there should be additional trips scheduled to relatively accommodate the crowd. If trips are available throughout the entire day, more space would be available on every train and no one would have to hang on doors,” he added.

Moreover, he suggested that several issues worsen the cars’ technical quality, mainly that every spare part is manufactured abroad and exported to Egypt at very costly prices. Passengers also steal parts of the train to sell them individually, such as water taps or light bulbs.

An official at the Railways Authority, who preferred to remain anonymous, told Daily News Egypt: “The authority looses EGP 2bn annually from vandalism and theft. Meanwhile, the revenues are all spent on salaries and on the authority’s debt, so there is a huge shortage in the fund and also labour.”

Monthly maintenance is conducted on all trains and engines, but the reason behind their sabotage is the street vendors, according to the official.

Speaking of the security level at the stations and on the trains, he said: “There should not be security personnel inside the train it would cause clashes between them and people.”

“We have put a sign on the train doors saying no standing is allowed and people still stand on doors; what else we can do?” he added.

In an interview with a private TV channel in late November, the recently appointed transportation minister, Saad Al-Geoshy, described Class C trains as “garbage”. He said the development plan for railways by the end of 2015 include the Class C train in five main areas – bathrooms renovation, windows repair so they could easily open and close, new doors, new lightings, and ensuring hygiene. “This will be a primary step to revamp the trains and the stations,” he added.

However, the main problems facing the railway transportation development are the annual losses and the payments of previous debts.

“I do not want to be involved again in debts, but rather I look for investments, and we started developing the underground metro as an initial step,” he said during the televised interview.

Weekly rides on the Class C train are a nightmare for thousands of commuters. The trains have been described as “inhumane”, not even suitable for animals. As the train takes off from Beni Suef to Cairo, people are witnessed falling off while others fight over space to stand in the train.

Countless deficiencies are witnessed on the train, varying from the non-existent safety conditions or hygiene, and the unimaginable crowd, among many others. This report documents some of the deficiencies, not only through the author’s personal experience, but also through interviews with commuters.

The struggle begins when attempting to board the train. The cars barely accommodate all the passengers, amounting to thousands. Many passengers choose to stand between the cars instead, and lean on the doors, or climb on top to sit on the baggage.

The doors never close, and no one wants them closed, not even the driver, because the ventilation system is insufficient to properly breathe within the train. The windows are smashed, as children randomly throw small stones at them as the train passes by. On one occasion, a stone hit the driver’s head and injured him.

The ride from Minya to Giza lasts for at least four hours, passing by Upper Egyptian cities in between and stopping at every station for only about two minutes.

Besides the unimaginable crowd, people continue to smoke throughout the long trips. Amid the absence of security and emergency kits, the smoke worsens the poor ventilation and threatens the lives of passengers. One day  a woman stepped into the train with a leaking gas cylinder, amidst the smoking crowd. Readers can fathom what happened next.

Fire extinguishers are not available on the train, nor are any emergency tools or guidelines. As such, fires are relatively frequent, and deaths are often reported as a result.

In September, another man lost his mobile phone as it fell on the railway. He leaned over to retrieve it, but he fell over and immediately died.

Meanwhile, the long ride makes it difficult for many people, especially those who have diabetes, to refrain from using the bathroom. Sadly, bathrooms on the Class C train do not exist. In a small room at the end of a train car passengers can find a hole in the ground to lead waste directly out of the train.

Blatant fraud is also seemingly practiced by the train-ticket officers, as passengers pay EGP 6 for a one-way ticket, despite the price printed on the ticket being EGP 3.5. Moreover, the spread of vendors on the train further complicates the crowding issue, but officers allegedly allow them on for deliberate and unknown reasons.