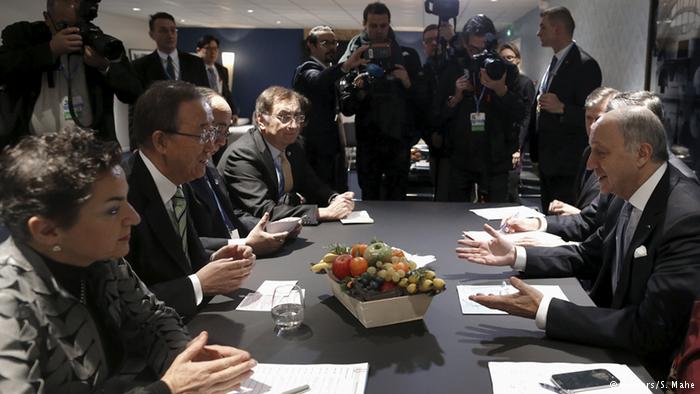 It is halftime at the Paris climate conference, and negotiators have agreed on a new draft agreement. That constitutes progress – but many sticking points remain for ministers to solve next week.
“It is so decided,” Dan Reifsnyder, the US deputy assistant secretary of state for environment, said a few minutes after 1 Saturday afternoon (1200 UTC), “the meeting is closed.” Together with a negotiator from Algeria, Reifsnyder had been chairing the working group in charge of drafting a text for a universal climate agreement to be concluded in Paris. Now, a draft has been agreed that will be passed on to ministers.

It is a text that German Environment Ministry State Secretary Jochen Flasbarth considers “manageable” for politicians. Yet it does contain many options that ministers will still have to decide on.

“This is not the end,” Christiana Figueres, the UN secretary-general for climate, reminded delegates. “We have to continue in this spirit.”

Negotiations on an agreement in which all countries commit to curbing greenhouse emissions in order to limit global emissions had been sluggish throughout the first week of the conference.

Among the contentious issues that remain for ministers to decide is how to define the purpose of the agreement: Is it to limit global warming to an increase of 1.5 degrees Celsius (2.7F) or “to well below 2 degrees” above preindustrial levels?

The draft text contains both options in square brackets and a final decision on the wording is not expected until the very last moments of the conference.

The article relating to the topic of finance contains more square brackets that are just as divisive.

Poorer nations have argued for financial support in exchange for their committing to low-carbon growth.

But industrialized countries argue that the circle of donor countries should include rich nations commonly considered “developing” such as the oil-exporting countries.

A delegate speaking for a group of countries that includes Saudi Arabia, Venezuela and Malaysia said the principle of “common but differentiated” responsibilities enshrined in the UN climate change convention would have to be preserved in the final agreement.

Such statements indicate that the tone of negotiations is unlikely to become friendlier.

Yet observers are cautiously optimistic, citing improvements since the last major summit.

“At this point in Copenhagen in 2009, we were dealing with a 300-page text and a pervasive sense of despair,” said Martin Kaiser of Greenpeace. “In Paris, we’re down to a slim 21 pages and the atmosphere remains constructive.”

For her part Nozipho Mxakato-Diseko, of South Africa, speaking on behalf of the largest group of developing countries, quoted former President Nelson Mandela, who died on December 5 two years ago.

“It is always impossible, until it is done.”

Sieren’s China: The UN seeks better air for everybody

The art of French resistance