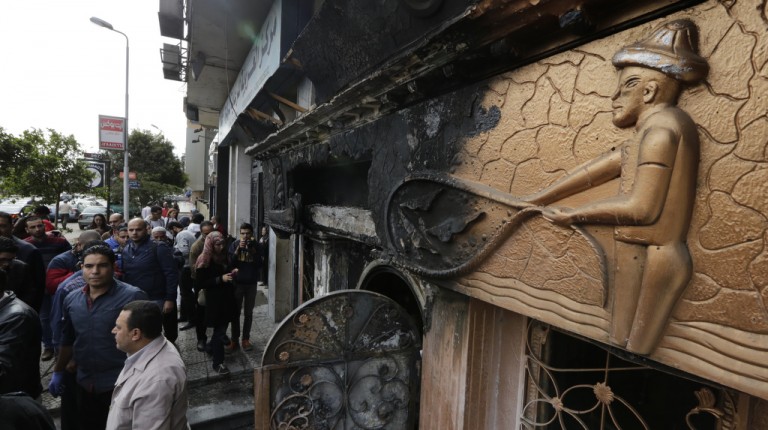 The nightclub in Agouza was attacked with Molotov cocktails on Friday morning, resulting in 16 deaths and 10 injuries. The three suspects were arrested Saturday and will be interrogated by the prosecution, facing possible murder charges.

State media reported that “for safety reasons” the prosecution team headed to the Agouza police station to proceed with the interrogation. The nightclub called “Al-Sayyad” is in the populated neighbourhood of Agouza.

The Ministry of Interior said it put together a “search and arrest operation to find the perpetrators, who tried to flee to Suez”. It said the motorcycle used in the attack was also confiscated by police forces.

The ministry told Daily News Egypt Sunday that the first two suspects informed the police forces about the location of the third suspect.

“When confronted with accusations, the men said they torched the club while riding a motorcycle,” the ministry revealed. They were previously denied entry to the club and so attacked it in retaliation.

The attack was followed by disputes between the Ministries of Interior and of Tourism regarding the responsibility for securing the venue. Both exchanged accusations related to the “legal permit of commercial places that serve alcohol in residential buildings”.

The Ministry of Interior said “such permits are given from tourism officials”, and that police forces are only allowed to secure the vicinity of the venue. Meanwhile, the tourism ministry said the vice police department is among the entities that grants permits to nightclubs.

At least 16 killed in attack on Giza nightclub