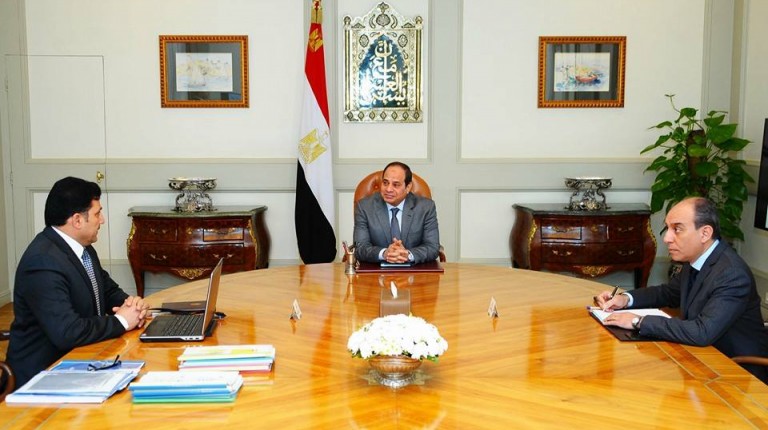 President Abdel Fattah Al-Sisi has urged Minister of Irrigation Hossam Moghazi to quickly implement an emergency plan to develop water-drainage systems, especially in Alexandria and Behiera, to avoid flooding due to heavy rainfall.

Presidency spokesman Alaa Youssef said in a statement on Saturday that Al-Sisi discussed the issue during a meeting with Moghazi, clarifying the necessary steps to implement an urgent plan of action to protect areas vulnerable to flooding.

Al-Sisi stressed the importance of taking every step necessary, especially in areas along the north coast that suffer from heavy rainfall but lack proper drainage systems.

More than 20 people were killed in November due to heavy rainfall and flooding in Alexandria and Behiera, prompting Prime Minister Sherif Ismail to enforce an emergency plan to revamp the irrigation and drainage networks.

The president also discussed the new Assiut Barrage, which will cost EGP 4bn. The project is intended to increase irrigation efficiency by 20%, while producing 32 MW of electricity, according to the statement.

The minister also referred to measures taken by the ministry to combat flooding through the establishment of water storage dams, canals, and artificial lakes.

He said that spending to reduce the risk of flooding amounted to EGP 620m over the past two years, while only EGP 90m was spent over the previous 10 years for the same purpose.

Al- Sisi praised Egypt’s irrigation and water drainage projects, which aim to improve and regulate the irrigation process by applying modern techniques, including the rationalisation of water consumption, thus maximising the amount of water available to agriculture.