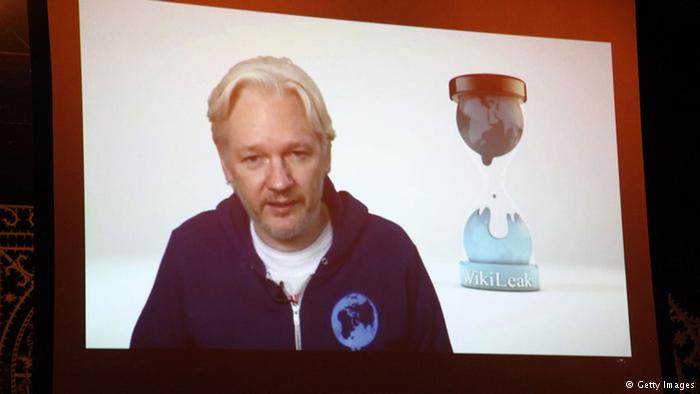 On 7 December , 2010, WikiLeaks founder Julian Assange turned himself over to the London police. To avoid extradition, he has been hiding inside the Ecuadoran embassy. An interrogation has not been conducted to this day.

WikiLeaks is alive – still. On 3 December , the whistleblowing organisation published secret documents dealing with negotiations for the Trade in Services Agreement between the United States, the EU and 22 other states.

WikiLeaks founder and spokesman Julian Assange witnessed this publication from his refuge in the Ecuadoran embassy in London – as he had the site’s revelations about the Trans-Pacific Partnership (TPP) in mid-November, as he had the publication of about 60,000 messages from Saudi Arabia’s diplomatic service in June.

Since June 2012, Assange has been holed up in the embassy. Meanwhile, five years have passed since the Australian lost his freedom. At the time he turned himself over to the British police. Sweden had issued an international arrest warrant for him, combined with a request for extradition.

Assange’s judicial drama began with two women who jointly visited a Stockholm police station on a Friday afternoon in August 2010. Both women had had consensual sex with Julian Assange. Then they found out that Assange had had intercourse with the respective other party.

The women then wanted to know how they could force Assange to take an HIV test. Several hours later, the police opened a criminal investigation into Assange over allegations of rape and sexual assault. Eva Finne, the Stockholm prosecutor in charge of the case, initially dropped that investigation for lack of sufficient initial suspicion. Another prosecutor, Marianne Ny of Gothenburg, picked the case up.

For years, it has been stuck at the preliminary investigation stage. No formal charges have been brought forward to this day. Formally speaking, the arrest warrant would only serve to bring about his extradition to Sweden, where he would be questioned about the allegations. The issue is that Sweden has refused to guarantee that it will not extradite Assange to the United States.

Assange took refuge in the embassy after exhausting every possible legal action to avoid extradition. His fear of being sent to the United States cannot be dismissed as paranoia. The United States reacted strongly to the biggest revelations released by WikiLeaks in 2010. The publication of the “Afghan War Diary” (more than 91,000 US reports on the war in Afghanistan from 2004 to 2010), the “Iraq War Logs (nearly 392,000 reports from 2004 to 2009) and especially “Cablegate” (more than 250,000 US diplomatic cables from 2003 to 2010) had shown the world a new – and hardly flattering – image of US political activity.

As a result, some US politicians openly advocated murdering Assange. Though it stopped short of that, the Obama administration – which has clamped down on whistleblowers with unprecedented rigor – latched on to the outrage. The administration has targeted not only the whistblowers themselves, but also those who help them publish disclosed secrets.

The journalist Charles Glass told DW that President Barack Obama’s government has prosecuted more journalists than all previous administrations combined: “It has been using the espionage act of 1917 – which was a wartime measure by another ostensibly liberal president, Woodrow Wilson – not to prosecute spies, but to prosecute journalists who have been exposing what the Obama administration has been doing in terms of torture, murder, rendering suspects around the world.”

Matthias Spielkamp, a board member of Reporters Without Borders, shares that view: “What we’re seeing is that whistleblowers are persecuted tenaciously and aggressively like never before.”

Spielkamp said attempts by the US government to prevent WikiLeaks from releasing information amounted to restrictions on the press. For example, in December 2010 the online retailer Amazon was pressured by the US government to no longer provide WikiLeaks with server space. And at the time international credit card companies, as well as the online payment service Paypal, refused to transfer funds to WikiLeaks. Spielkamp also rejected claims that WikiLeaks had endangered lives by publishing the confidential documents: “This has never been proved. But the assertion is repeated again and again.”

There is no clear proof that potential US interest in Assange has anything to do with the criminal investigations in Sweden. Nikolaos Gazeas, a lawyer based in the western German city of Cologne, said the fairness of the proceedings against Assange was clearly questionable. Gazeas, who deals with international criminal law, particularly criticized the Swedish prosecutors: “Up to this point, there has been no questioning of Assange in the UK. If you consider that the Swedish judiciary conducted – in 2014 alone – 44 questionings of witnesses or defendants abroad, it seems quite remarkable that they refused, in the case of Assange, to consider an obvious move like that for such a long time, only to abandon it eventually due to formal issues.”

“Put very cautiously,” Gazeas said. “It gives rise to the suspicion that the Swedish authorities involved don’t seem to have such a profound desire to actually conduct an interrogation of Assange in London.”