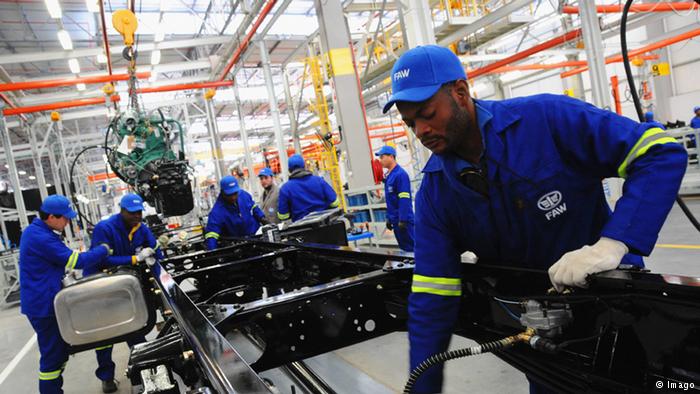 China is investing heavily in building up infrastructure and human capital in Africa. Germany should follow its good example. The continent will play a steadily increasing role in Europe’s future.
In South Africa on Friday, China’s president announced $60 billion (55 billion euros) in new investments into Africa over a three-year period within the framework of FOCAC, the Forum on China-Africa Cooperation, a framework first launched in 2000.

The key word here is “investment.” The bulk of the money will be supplied in various types of concessional loans to support infrastructure development. A minority of the money is in the form of aid, including a billion renminbi ($156 million) in emergency food aid.

There are at least two things about China’s approach to Africa that Germany and Europe could learn from. The first is that it is focused on doing business – on making investments in commercially viable economic projects, rather than merely giving “development aid” in the form of grants. That makes China’s engagement in Africa, and the jobs and industries it creates, financially self-sustaining and capable of generating more growth.

The second is that China doesn’t have any qualms about using the powers of the Chinese state to direct large-scale investment flows. Beijing combines foreign policy, economic development assistance and Chinese business interests in coherent packages in its partnership approach to Africa.

China’s state-capitalist approach may contravene the doctrines of folks who hew to a narrow market-fundamentalist ideology that insists the State must simply set up economic laws and then allow private market participants to invest – or not – without “interference” by governments.

Yet China has managed to pull itself up by its bootstraps on a heroic scale during the past 35 years – not so long ago, its level of development wasn’t much different from Africa’s. That doesn’t mean China can be a direct one-for-one model for Africa’s future; Africa is incomparably more ethnically fragmented than China has ever been, and it has different traditions. Yet China can still bring aspects of its recent experience to bear productively in its partnerships in Africa.

Pragmatists recognize that where infrastructure is poor and the rule of law is uncertain, as in many regions of Africa, it’s enormously helpful to develop major projects under the long-term patronage of a powerful state. When a heavyweight player like China commits to financing and co-development of major projects, its influence with local partners can compensate for weak local state systems in the short run, and help strengthen them in the long run.

One of the bright spots in a fraught global geopolitical landscape is China’s solid relationship with Europe and Africa – and with Germany in particular. The broad relationship between German and Chinese people is marked by mutual respect, with both recognizing the other as industrious, determined and capable.

The trade relationship between China and Germany is also strong – as is that between China and Africa. But the trade relationships between Germany and Africa are not as strong as they should be. There is much work that could be done, but it will require Germany increasing its efforts to promote investment in Africa, rather than focusing on development aid. One way this could be done is to promote “special economic zones” co-managed by German agencies and local partners.

Special economic zones were used to great effect within China itself starting in the early 1980s, as a key tool in the great renewal of the country’s economic structure under the leadership of Deng Hsiao Ping. It’s an approach China has begun to implement in Africa too – setting a goal of 50 special economic zones, mostly managed by private Chinese companies.

Special economic zones are managed under multi-decadal contracts by Chinese companies under contract to agencies of the Chinese government in partnership with local African governments. This gives Chinese companies looking to do business in Africa a familiar and stable governance framework and business culture, making investments much easier. Germany could and should adopt a similar approach – and perhaps even scale it up.

Could China and Germany cooperate on African development?

It could be an interesting experiment for Germany, with its famous love of order and rules and its extensive technical capacities, to take a look at approaching the establishment of a few “special economic zones” in joint ventures with China in Africa.

China is set to be a long-term presence in Africa, and Africa, in turn, is set to become a big long-term presence in Europe – demographically as well as economically, given that by 2050 its population will be five times that of today’s European Union, compared to just twice today. China and Germany already get along well. There are good reasons why German economic and foreign policy-makers might want to sit down with their Chinese counterparts as well as African partners and compare notes about how best to help Africa develop successfully over coming years and decades.

There’s no shortage of conferences or workshops in Berlin about the future of Africa, or encouraging noises about the importance of investing in the continent. With growing flows of north-bound African refugees, German politicians have also taken up the mantra that “something must be done” to tackle the causes of refugee migration at their source, by improving conditions in the countries of origin.

But so far, there remains too much talk of “development aid” as distinct from “infrastructure investment,” and the volume of German investments or state commitments remains rather small beer when compared to China’s big-handed approach.

It’s time for Germany to up its economic engagement game in Africa.