When you go shopping – whether at the corner store, or at the ritzy Galeries Lafayette or Printemps here in Paris – you expect to know what you are spending on and what you are getting.

Strangely, when it comes to global climate treaties, our politicians like to commit to hugely expensive policies without even acknowledging that they come with a price tag.

Listening to speeches as I have been doing here in Paris, you will hear plenty of exhortations for action, lots of talk about the dangers of climate change, discussion of moral responsibility and future generations. But almost nothing about what these carbon cuts will cost.

Yesterday I looked at likely effects of the agreement likely to be struck here in Paris. In a best-case, overly optimistic scenario it will cut global temperatures by just 0.17°C (0.3°F) by 2100.

Today, let us examine what that temperature reduction will cost us.

It is extraordinary that UN officials provide no official estimated costs for the likely Paris treaty. So we are left to make an unofficial tally, which we can do easily enough by adding up the costs of Paris promises submitted by the US, European Union, Mexico and China, which together account for about 80% of the globe’s pledged emissions reductions.

To be clear, not even at a national level are there official cost estimates. President Obama has promised to cut US greenhouse gas emissions 26%-28% below 2005 levels by 2025. By turning to data from the peer-reviewed Stanford Energy Modeling Forum, we find that hitting the target would reduce US GDP between $154bn and $172bn annually.

Mexico is worth singling out for analysis because it has put into place the strongest climate legislation of any developing country, conditionally promising to reduce emissions by 40% below what it would otherwise have emitted by 2030. The Mexican government’s own cost estimates are between 14 and 79 times lower than those in the peer-reviewed literature supported by the US EPA and the EU. This analysis finds that the cost in 2030 is about 4.5% of GDP or about $80bn annually. In 2050, Mexico will be losing almost $0.5tr every year because of its climate promises.

And finally, China has promised by 2030 to reduce its carbon-dioxide emissions, per unit of GDP, to at least 60% below 2005. Using the data from the Asia Modeling Exercise we find that hitting this target will cost at least $200bn a year.

So in total, the Paris promises of EU, Mexico, U.S. and China will diminish the global economy at least $730bn a year by 2030—and that is in an ideal world, where politicians consistently reduce emissions in the most effective, smartest possible ways.

But that will not happen. It never has in history. Politicians have a habit of wasting money on phenomenally inefficient subsidies for solar and bio-fuels. And based on the European Union experience, such wastes can double the costs of carbon-cutting policies. 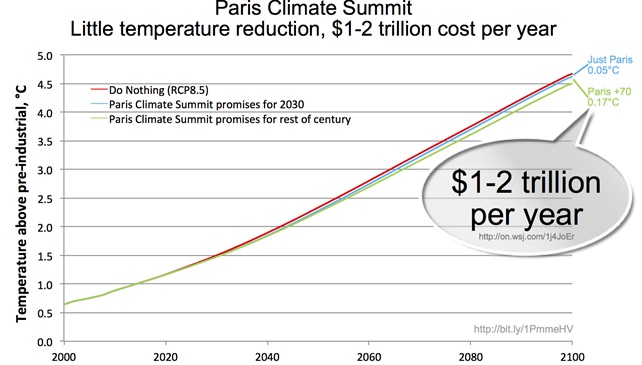 Also, there are another 122 nations that have made promises for Paris. These increase the total emission cuts by one-fourth. The cuts on the table in Paris, then, will leave the global economy, in rough terms, $1tr short every year for the rest of the century—and that is if the politicians do everything right. If not, the real cost could double.

There is little wonder why politicians here in Paris are not talking about the price tag.

Bjorn Lomborg is Director of the Copenhagen Consensus Center and Visiting Professor at Copenhagen Business School. He researches the smartest ways to help the world, for which he was named one of Foreign Policy’s Top 100 Global Thinkers. His numerous books include The Skeptical Environmentalist, Cool It, How to Spend $75 Billion to Make the World a Better Place and The Nobel Laureates’ Guide to the Smartest Targets for the World 2016-2030.

Europe’s biggest protest – but not the world’s top priority

Paris needs to take the “climate” out of “climate aid”