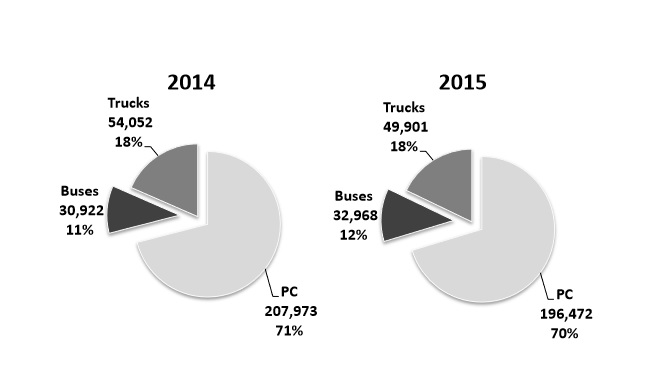 The Automotive Marketing Information Council (AMIC) issued a report on expected total car sales during 2015. The report will be reviewed by governmental agencies during the second annual Egypt Automotive summit.

AMIC Director Mustafa Hussein told Daily News Egypt that about 280,000 cars will be sold, a drop of only 4-5%, despite the challenges the sector has been facing.

Hussein said that the government should realise the importance of the automotive sector because it provides the state’s treasury with direct custom fees and taxes, in addition to indirect taxes collected from after-sale services, commercials, and profit taxes.

“The state’s direct revenue off the sector is about half of the income from the Suez Canal, including customs, taxes, and development fees,” he said. “About EGP 15bn is collected through taxes and customs on passenger cars only in 2015”.

The automotive sector is a large employer, where for every thousand sold cars, 22 job opportunities are provided “in addition to indirect jobs,” he said. Feeder industries can help the national economy with products released in the market and those exported abroad.

The automotive sector however is still facing many challenges, most importantly are the disputes between car importers and the Egyptian Customs Authority over the indicative prices of imported cars, as well as the lack of government vision for the development of the sector.

Hussein called upon the government to engage discussions with investors to draw a strategy that improves the sector. “This can be better than having each party put their own strategies,” he said and that the dollar liquidity reserve is burdening the sector. “The policy imposed by the Central Bank of Egypt only (CBE) benefits exchange companies”.

The state can develop alternatives to secure dollars based on remittance from Egyptian expats, since the state estimates that about $19bn is available abroad while only $3bn to $4bn enter the banking system and the rest going through exchange companies.

He called on Egyptian banks that have branches in Arab countries to provide Egyptian expats with incentives, such as purchasing dollars at higher rates to allocate them for luxury goods.

The Egyptian automotive industry has been in a constant stalemate since Nasr Automotive stopped operations and after requests by international companies – such as Volkswagen, Ford, and Renault – to enter the market were neglected. “Other countries in the region attracted those companies to develop their markets as a result,” Hussein said.

An effective automotive strategy should rely on exporting, especially automotive components. “Chances to exporting cars are low, while feeder inputs can attract foreign investment,” he said.