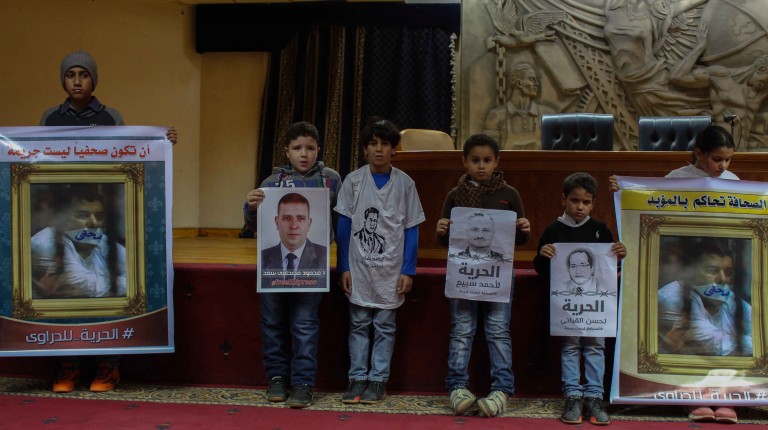 A number of journalists and activists held a protest Wednesday in front of the Press Syndicate calling for the release of their detained colleagues.

The protest comes as part of “We will treat them, we will get them out… Journalism is not a crime” campaign organised by the Freedoms Committee of the Press Syndicate, calling for the release of detained journalists and the improvement of their conditions in prisons.

Journalists held a rally in white clothes in solidarity with their detained colleagues, with protesters chanting several slogans, including: “Journalism is not a crime” and “Freedom for every detainee”.

Some of the attendees chanted for the detained photojournalist Mahmoud Abu Zeid ‘Shawkan’ who was arrested in 2013 while covering the violent dispersal of the pro-Muslim Brotherhood sit-in at Rabaa Al-Adaweya.

Several human rights activists and journalists took part in the demonstration, including Head of the Freedoms Committee at the Press Syndicate Khaled El-Balshy, journalist and political activist Rasha Azab, and professor Leila Sweif, the mother of the detained activist Alaa Abdel-Fattah.

The freedoms committee has recently announced that there are over 32 journalists currently imprisoned, including 18 journalists detained over press charges. Some of the journalists were arrested while on duty, according to the committee.

Shawkan only journalist among 738 defendants in Rabaa dispersal case