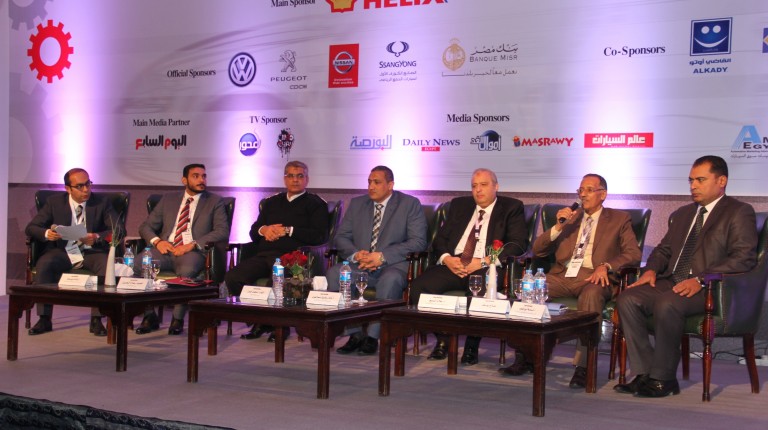 Two of the main issues addressed during Wednesday’s session of the second Egypt Automotive Summit were the inadequacy of the new automotive industry strategy and the need for major infrastructure investments.

This was during the second discussion panel held in the summit, entitled “The automotive industry strategy and feeder industries”.

The panel moderator, Amr Nassar, who is the Secretary General of the Engineering Export Council (EEC), asked the head of the Industrial Development Authority, Ismail Gaber, to elaborate on the measures of evaluating the rate local components in cars industry, which would determine whether companies are allowed to export their products or not.

Gaber responded that we cannot deny that the current rates range between 13% and 17%, which does not comply with global standards. He added that the formulation of the new strategy takes into account international standards in determining the local component rates.

He noted that the automotive market is currently going through a transitional period, which is necessary to increase to the rates to the targeted 60%.

Gaber highlighted that the new strategy will be finalised after a community dialogue with all the industry’s parties, whether companies or the Chamber of the Automotive Industry or the Federation of Egyptian Industries.

Over the past period, meetings were held with these parties to apply global standards, Gaber added.

Regarding intensifying local production, the board member at Chamber of Engineering Industries, Abdel Moneim Al-Qady, said this requires working on two aspects; first, developing the quantity of cars produced in Egypt, as it is not reasonable that each factory only produce 1,000 cars. The second is exporting, as the contracts signed with global companies do not include terms for Egyptian exports.

He added that deepening local industry is hindered by the need for major investments, which cannot be pumped amid the low rate of production in Egypt. This requires cooperation with various state bodies such as Military Production Ministry.

Meanwhile, Hussein Mostafa, the Secretary General of the Egyptian Automobile Manufacturers Association (EAMA), affirmed that the industry is facing a planning crisis in terms of managing its capacities to achieve integration.

Mostafa concluded by highlighting the importance of establishing a quality assessment centre in partnership with the private sector.

Amr Nassar then asked the Head the Egyptian Organization for Standardization and Quality (EOS) Hassan Abdel Meguid regarding the capacity of Egyptian laboratories to conduct quality control tests that companies often conduct abroad.

Abdel Meguid replied that the organisation is focused on the development of small parts at labs, considering the limited budget allocated for the labs by the Ministry of Finance.

“The organisation cannot meet the demands of car manufacturers alone, as they are too expensive,” he said.

“The organisation can contribute by offering space,” he added, offering 23 acres in Helwan that can be used, in addition to other lands where labs can be established. Moreover, he said the organisation can seek help from the Ministry of Military Production or the Infantry authority for equipments.

Abdel Meguid noted that the real challenge is shifting from safety recommendations to binding legislation as applied in the European Union. “For example, the organisation plans to impose binding safety standards in the appliances sector.”

Mostafa said the private sector can finance and help prepare a feasibility study.

Further, Saied Abdullah, First Undersecretary of the Ministry of Industry and Foreign Trade said that the state’s plan to reach a local component rate of 60% requires a huge boost in infrastructure. “More importantly, there should be feeder industries,” he added.

He noted that Egypt lacks some several feeder industries, such as the castings industry that feeds factories for manufacturing engine bodies.

Honorary chairman of the Automotive Marketing Information Council (AMIC) Raafat Masrouga said the available information on the strategy is disappointing. “The strategy should be drafted to serve consumers, not reach production size,” he added.

Masrouga also said the strategy should be short-term and not for 10 years, as inputs are likely to change over time.

He explained that serving consumers begins with pricing flexibility, noting that in 2004 customs were cut by 40% which led to a 70% sales increase.

Highlighting the importance of matching international prices, Masrouga said customs should be cut in line with the European Partnership Agreement.

He explained that Egypt gains EGP 27bn in profits from customs, of which EGP 17bn are from automotive imports. “However, this is low when compared to gas subsidies that cost EGP 40bn,” he said. “This can be imposed directly on consumers and cut down customs.”

Amr Nassar concluded the session by noting that Egypt’s share of Africa’s imports is less than 1%, and that 2% of that is automotives.