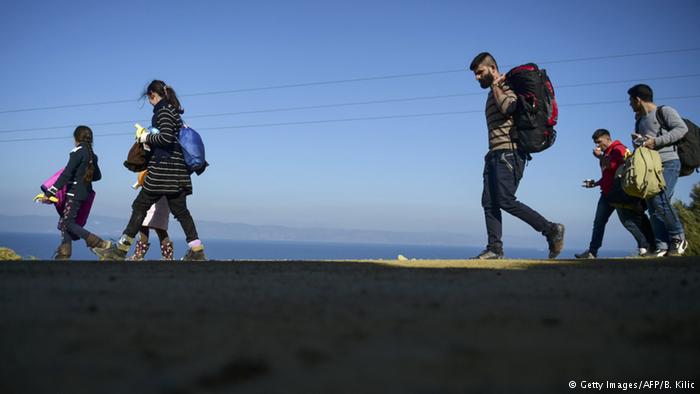 Every day, people flee from the regions that “IS” has declared as its territory. The extremists have problems accepting this, as the fact of people leaving the caliphate does not fit with their worldview.

It is a photo that shocked the world: the young refugee boy Aylan lying on the beach of the Turkish town of Bodrum. His red T-shirt has ridden up a little; his shoes are soaked through. At first glance, it looks as if Aylan is sleeping. But his face is in the water. The boy is dead.

In September, this picture was printed by newspapers the world over and shared on social networks thousands of times. The fate of this three-year-old who drowned while fleeing to Greece encapsulates the dramatic nature of the current refugee catastrophe.

“Dabiq,” the English-language propaganda magazine put out by the terror organization “Islamic State,” also published the photo in its Internet edition – but not to draw attention to the desperate plight of refugees who, like Aylan’s family, had fled from terror.

Instead, the extremists used the picture for their own purposes.

“The danger of abandoning Darul-Islam (Islamic territory)” is the title shown above the picture of the drowned boy.

In the article that follows, the author uses quotes from religious authorities to underpin his attempt to prove that true Muslims are not permitted to leave the self-styled “Islamic State.” He goes on to describe the fate that purportedly is lying in wait in the Western world for those who desert: alcohol, drugs, the rejection of Islam. And, the author argues, it is above all refugees from Syria and Libya who are jeopardizing the lives of their children.

This warning, and indeed the entire article in “Dabiq,” is an admission by “IS” that people are running away from it – a phenomenon with which the “Islamic State” has not reckoned in the least. After all, its followers see it as a drawcard for Muslims from all over the world – not as a place that people get out of as fast as they possibly can, at whatever cost.

“The interesting thing is that this refugee movement is only taking place in one direction,” says best-selling German author and former Christian Democrat parliamentarian Jürgen Todenhöfer. Last year, Todenhöfer spent 10 days in the “Islamic State” and wrote a book about his experiences. “In Syria, no one leaves territories that are in the hands of the Assad regime for territories belonging to the caliphate. The direction is always the opposite one: away from the caliphate to regions that are ruled by the regime.”

From the point of view of the extremists, this is the wrong direction, now that the caliphate has been “revived.” According to the two-page article in “Dabiq,” Muslims are permitted to seek refuge only in the “Islamic State,” and are not allowed to flee from the caliphate to territories controlled by the Alawites, Shiites or the Kurdistan Workers’ Party (PKK), let alone to Europe or America, where “unbelievers” hold sway. Leaving the Islamic territory voluntarily is a “dangerous major sin,” the unnamed author writes.

It is unclear how many people have already left the regions controlled by the terror organization. According to the United Nations’ refugee agency UNHCR, 8 million people are fleeing from them within Syria alone. Another 4 million Syrians have sought refuge in neighboring countries.

The fact that there are refugees who do not just flee into territory of the Syrian regime but want to go on to other countries is a huge catastrophe for “IS,” Jürgen Todenhöfer says. “‘IS’ sees itself as a worldwide center of attraction, the extremists establish a caliphate – and people start fleeing in their millions.”

Legitimization problem for the extremists

Todenhöfer sees this as a “legitimization problem” for “IS” – not just in Syria, but also in Iraq. The northern Iraqi city of Mosul, which was taken over by the extremists in June 2014, once used to have far in excess of 2 million residents. Now, the population has sunk drastically. Hundreds of thousands of people are said to have left the city – not just religious minorities such as Christians, who are persecuted by “IS,” but also Sunnis, upon whose support the terror group relies.

“For ‘IS,’ all of this is ultimately a humiliation,” Todenhöfer says. However, so far, it has not caused the extremists to change their strategy. In the article in “Dabiq,” the author does not even speculate as to why Muslims could be voluntarily leaving “IS”-controlled territories. Perhaps this is because the terror exercised by the extremists is too obvious. But evidently, “IS” cannot ignore the topic of refugees “fleeing the caliphate” even in its English-language propaganda magazine. It would seem that there are simply too many of them for that.