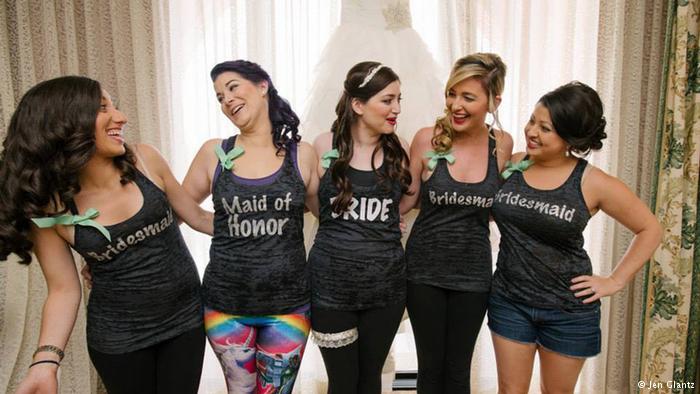 Nothing is too crazy in New York. That’s what a young woman in her 20s discovered when she offered her services as a professional bridesmaid. Helping brides navigate choppy wedding waters has become a lucrative business.
Jen Glantz’s life changed on a Friday in June 2014. That day, two friends had asked her to be their bridesmaid – not one couple, but two separate brides. When she went home to share the news, her roommate said “You’re a pro-bridesmaid.” Maybe it was brought on by the flu medication Glantz’s roommate was taking that day, but the quip set the wheels in motion nonetheless.

Glantz, now 27, said she moved to New York from Florida “for an adventure” – and that’s certainly what started when she posted an aid on Craigslist that night to offer her services as a professional bridesmaid.

“I like being a bridesmaid and I love strangers, so I just went ahead with it,” Glantz said in her Manhattan apartment. “I wrote it at 9 p.m. on a Friday night and went to sleep. The next day I saw friends and didn’t even mention it.”

She didn’t have to spread the word about her bridesmaid ad. The Craigslist post went viral over the weekend and by Monday, Glantz had friends sending her the story about this “funny girl,” not knowing it was her.

The idea apparently hit a nerve: within the first three days, 400 emails poured in, and by the end of the week, Google shut down the Gmail account Glantz had created for the ad, because the tech administrators assumed the large number of emails coming in could only be spam.

Taking care of people, not things

What Glantz offers is to basically put the bride’s mind at ease about the wedding, which is more and more hyped up to be the “greatest day of your life.” For many women, all it means initially is stress. How do you seat family members that are at odds with one another, what to do with that bridesmaid who never responds to planning emails and how to sleep at night when your to-do-list before the wedding seems endless?

The pro-bridesmaid offers different packages on her website, but all of them include her giving emotional support and letting the bride, her mother or the maid-of-honor bounce ideas off of her.

“On-call therapist, peacekeeper, personal assistant – this is what I do,” Glantz said, laughing. “And sometimes, I also plan Bachelorette parties.”

One thing she is not: a wedding planner. Those professionals find caterers or argue with the florist about the flower centerpieces. In her own words, Glantz takes care of the people in the wedding, not the things. And there is no one else around who is specialized on bridesmaid duties and renting out her services.

The lowest-priced option would be to hire Glantz as a “virtual bridesmaid,” which costs around $200 (184 euros). In that case, she talks things through with her client via Skype or telephone and the two never actually meet. On the other end of the scale is the “Bridesmaid by your side” package. Here, Glantz shows up to meet with the bride face-to-face and is part of the wedding party on the big day. She’ll even bring her emergency kit, a waist pack that includes tissues, band-aids, safety pins and more. Her calming presence has its price: the most expensive option chips around $3,000 off the wedding budget.

With that kind of payment, it’s no surprise to hear that being a bridesmaid really is Glantz’s full-time job. It didn’t start out that way – for one-and-a-half years, she was a copywriter at a tech start-up while bridesmaiding on the side. But with emails pouring in – the extensive media coverage she is still receiving helps – and up to $3,000 dollars a wedding, she now lives solely off of her own business.

Depending on where and how you get married, three grand is either a lot of money or just some additional change on the side. According to wedding website TheKnot.com, in 2012 the median cost of a wedding in the US was $18,086. In Alaska, that figure was almost $10,000 lower, but in Manhattan, the island of outrageous rents and five-dollar-croissants, the median wedding cost a whopping $55,104 in 2012.

“We have lost sight of what a wedding day is all about and are now content to throw money out the window for pointless pleasures, all for the sake of boasting about the cost later,” Elaine Tripp complains. The high school teacher got married five years ago and says she would most definitely not have hired Jen Glantz.

“While I give the woman credit for coming up with an innovative way to earn herself revenue, all it seems to me is yet another way to make more money off of brides who are desperate for that ‘perfect’ day,” Tripp said.

Sarah Wilhelm had a small wedding in the Midwestern state of Wisconsin in August 2010 – and she believes hiring a bridesmaid could be quite useful.

“If I would have wanted a large wedding with many people, someone like Jen would have been amazing to take care of all the details,” Wilhelm said. “Sometimes you don’t want to burden your long-time friends or bridesmaids by demanding too much, you just want to have fun.”

Glantz tries to make that happen, even if it sometimes means indulging in somewhat unusual ideas as well. Recently, her job was to walk the bride’s lap dog down the aisle.

After having attended roughly 25 weddings in 2015 alone, which ideas will Glantz, who is currently single, steal when her own big day arrives?

“I have an easy answer for that: none,” the pro-bridesmaid said with conviction. “I don’t want any of it. I hate weddings. They are so impersonal. I’d just want a small party with pizza – and I probably wouldn’t have a bridesmaid.”

The Bride Planner: Phenomenal lifesaver of all brides