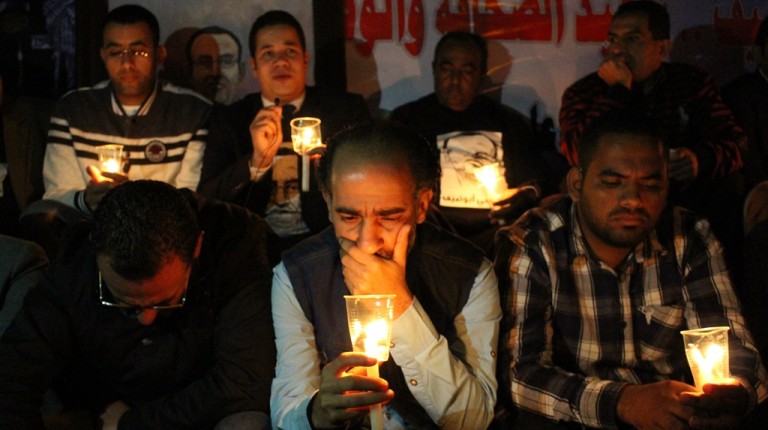 Tens of journalists commemorated on Saturday the third anniversary of the killing of photojournalist Al-Hosseini Abu Deif, in front of the Press Syndicate.

The journalists mourned their colleague, holding up candles in his honour and chanting that Abu Deif’s assassins must be found and punished.

The journalists were joined by Press Syndicate administration officials, friends of the victim and Abu Deif’s brother, Salem.

Minister of Legal and Parliamentary Affairs Magdy El-Agati honoured Abu Deif’s family. Although the assassins have not been found, he said, investigations will be intensified to finds the murderers as soon as possible, he said.

According to state-owned Al-Ahram newspaper, Salem thanked El-Agati for his efforts. However, he said the forensic medicine report confirmed that Abu Deif was killed using “unconventional weapons”.

Salem questioned the court’s verdict earlier this year against former president Mohamed Morsi, which convicted him of involvement in the Itihadiya palace violence in 2013, in which Al-Hosseini was killed. Morsi and others were sentenced to 20 years in prison. He said his family did not approve of the verdict as they were expecting a death sentence.

The commemoration stand ended with a press conference, in which Salem Abu Deif declared his intentions to file a lawsuit against Al Jazeera new agency for publishing a documentary that changed and manipulated events.

Salem accused Al Jazeera of false reporting in a documentary on Egypt, by distorting facts in support of the outlawed Muslim Brotherhood. He said his deceased brother had footage that proves the Brotherhood’s involvement in attempts to kill young protesters in the Itihadiya palace clashes.

Al-Hosseini Abu-Deif was a photojournalist at the privately-owned Al-Fagr newspaper. He was killed during the Itihadiya palace clashes on 6 December 2013, between pro-Morsi and opposition protesters.

Abdel Kader said that while Abu Deif was showing him pictures, they heard many gunshots and Abu Deif was shot. He was in a coma for a week before he succumbed to his injuries on 12 December, 2013.

No justice in sight for killed journalists in post-revolution Egypt

Journalism in Egypt, a dangerous business