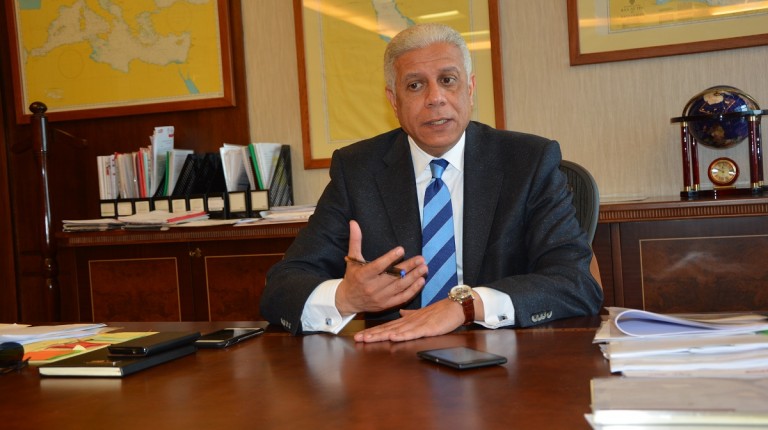 Telecom Egypt (TE) is planning on offering new services to maximise its revenues in the upcoming period, according to CEO of Telecom Egypt (TE), Osama Yassin. In an interview with Daily News Egypt, Yassin said TE is awaiting the unified license, expressing hopes that it will come with 4G frequencies.

What is the company’s strategy for 2016, and on which fields will you focus?

We will focus on delivering customer interest and maintaining shareholders’ equity to support the company’s position on the local market. We are working to achieve the strategic goals of the company, both in the marine cables business and transmission, as well as maintaining revenues and achieving higher profitability.

Will the company offer new services to maximise its revenues over the next year?

TE mainly provides landlines and ADSL, in addition to offering outsourcing services through its investment arm, TE Data-Exceed. The company also deals with marine cables. We are working to keep up with developments in the telecommunications sector to meet the needs of customers, as only new services will bring profit to the company’s shares.

TE’s financial statements revealed EGP 2m in losses during the third quarter of this year. What was the reason behind that?

However, the profit was influenced in the third quarter by an arbitration case, which was adjudicated in favour of the opponent. If that money was neutralised, net profit would have amounted to 25% during the third quarter of 2015.

What are the updates regarding your negotiations with private Internet companies for infrastructure cost reductions?

We have asked the private Internet companies to provide us with their proposed prices over the next three years, but we did not receive any replies. Therefore, we have not agreed on new rates for infrastructure. We are still in negotiations though.

The launch of the unified licence was halted due to disputes with mobile operators. Have you been negotiating with the Ministry of Communications to launch the license in 2016?

There is no doubt that the launch of the unified license is TE’s hope to shift to an integrated provider. However, this is up to the Ministry of Communications and the National Telecommunications Regulatory Authority (NTRA) to decide. We are awaiting an announcement regarding this very soon.

In terms of technicalities, TE is completely prepared to become an integrated provider. The Board of Directors has chosen a committee to oversee and confirm the company’s readiness for that phase. We are still waiting for the final form of the licence to be issued to finalise our preparations.

It is better for TE to enter the Egyptian mobile communications sector with 4G frequencies. Being a fully integrated provider is what TE seeks.

Will you take part in the implementation of the technological zones projects?

We are happy to participate in the implementation of technological zones projects and smart villages as an infrastructure services provider. We have not yet been asked to become financing partners.

The NTRA announced that it requested from TE to install devices to measure the quality of Internet. What are the developments regarding this?

We have not received any communication from NTRA about this.

Private Internet companies accuse TE of favouring TE Data at the expense of the market. What is your comment on that?

I reject such accusations. We stand at the same distance as all companies. We offer infrastructure services equally in accordance with our commercial agreements. We hold weekly meetings with all companies to solve the issues facing them.

Are dollar shortages affecting your business?

The dollar shortage impacted us twice. Firstly, the shortage raised the price of the dollar against the pound and increased our revenues from marine cables. On the other hand, the devices we import to develop infrastructure have also become more expensive. Overall, the costs for the infrastructure development have increased. However, we have agreed with importers that we will pay in Egyptian pounds. We have spent about EGP 5bn last year on infrastructure development, and we look forward to increasing them next year.

25% decline in demand for international services because of political crisis: Vodafone