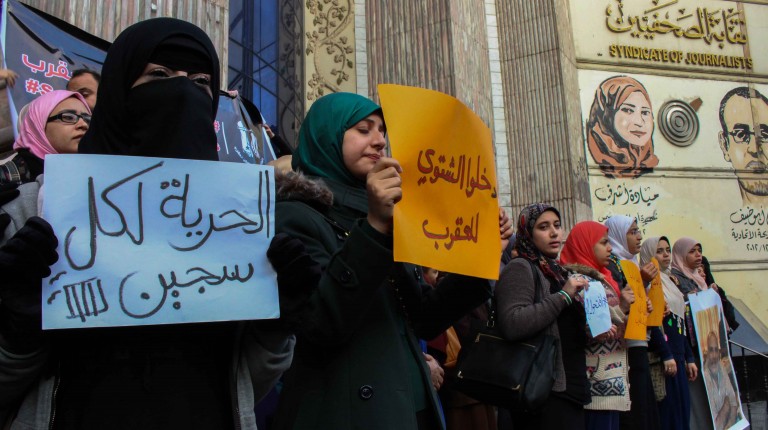 The Ministry of Interior responded on Monday to claims that the conditions of inmates in Al-Aqrab Prison are deteriorating.

A representative from the ministry said the claims of torture inside prisons are “attacks on the police apparatus”.

The comments come as harsh criticism has been directed to the interior ministry, accusing it of “mistreating” and “torturing” inmates in Al-Aqrab Prison. On Sunday, tens of family members gathered in front of the Press Syndicate to protest the treatment of the prisoners, demanding that the ministry allow winter clothing and visits.

The relatives at the protest, which was organised the by the Association of Relatives of the Al-Aqrab Prison Detainees, raised pictures of the detainees and told stories of alleged violations.

The ministry, however, said that the claims are aimed at acquiring “personal gains”, and “overlook the sacrifices of police officers in such a critical period.”

In response to complaints from detainees’ family members, the ministry added the Prisons Department is under constant legal supervision to guarantee the suitable treatment of detainees with a view to ensuring their human rights. The source asserted that the ministry is open to receiving delegations from human rights organisations.

He added that the prisons aim to “reform” not to “torture” detainees, asserting that the minister of interior has ordered that there should be no violations against inmates.