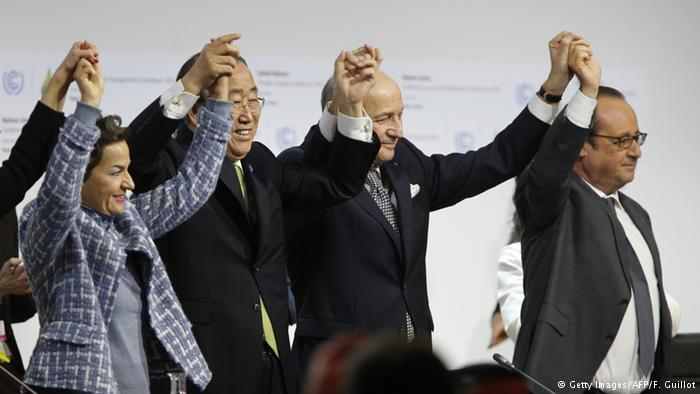 The agreement reached at the world climate conference has been labeled “historic.” This is an exaggeration, writes DW’s Henrik Böhme: the real value of all those “shoulds” committed to paper remains to be seen.
It was perfectly understandable that frenetic cheering erupted among the thousands of delegates present at the uncharming trade fair grounds on the outskirts of Paris when, after two weeks of tantalizing, tough and fraught negotiations, the final fall of the gavel signaled that an agreement had eventually been reached.

It was also understandable that some of the male and female delegates burst into tears; and praise for the diplomatic skills exhibited by the leader of the negotiations, Laurent Fabius – in his regular occupation, foreign minister of the French Republic – was perfectly in order.

Even smaller progress has been celebrated

Only the term “historic,” which was used almost incessantly in appreciation of the treaty committed to 31 sheets of paper, was out of place. That, however, could be condoned as well, since the initial situation had not given any cause for optimism that the delegates from around the world would eventually be able to reach agreement on anything at all.

By the way, the act of rejoicing in the wake of climate conferences is a familiar sight, and it has previously been triggered by much less than the world climate treaty that has now been concluded. In 2005, delegates in Montreal patted themselves effusively on the back for putting the Kyoto protocol – agreed upon eight years previously and to be superseded by the Paris agreement in five years, if all goes as well as possible – into operation. And two years later, delegates were embracing each other in Bali because they had been able to avert a failure of the conference – and, thereby, of the whole process – at the eleventh hour. Even the Copenhagen disaster of 2009 was initially presented as a partial success. In sum, it doesn’t take much to make delegates rejoice after a two-week climate conference marathon.

When “shall” turns into “should”

And now the exultation of Paris: What is it worth in the face of the fact that over the coming years – quite probably decades, it must be feared – nothing will happen in the area of climate protection? After all, the treaty relies on voluntary action. It more or less just asks nations to do something for climate protection, with the United Nations now and again casting an eye over what has been done. If there is just a vague commitment to reach peak levels of harmful greenhouse gas emissions “as quickly as possible,” this is the only evaluation of the pact that is possible. What’s the timeframe for “as quickly as possible” – ten years? Or 50?

No-one is under any obligation to do anything – after all, according to the text of the treaty, nations are merely “invited” to participate in saving the climate. Even the word “shall” has been removed; just prior to the final fall of the gavel, it was replaced by “should.” In the language of diplomats, this amounts to a huge difference. And what’s the use if US delegates in Paris turned out to be really committed to the cause, but Republicans at home have both feet on the brakes already, announcing they’ll reverse anything which poses a potential threat to the country’s economy?

Such world negotiations are, of course, a complex network of give-and-take. And, of course, Paris primarily dealt with a transfer of funds from North to South. At least the G7 industrial nations are now obliged to pay billions into the Adaptation Fund, which helps poor countries most affected by climate change. However, decarbonization of the world economy by the middle of the century, a goal which the G7 had announced at this year’s summit in the Bavarian town of Elmau, is not mentioned at all in the Paris treaty. No Saudi prince would have signed that, of course. A vast number of conferences have shown by now that the problem is always the same: this sort of meeting is the wrong forum for tackling this global issue, because participants are preoccupied with themselves, with upcoming elections and the economy at home, and because the main aim is for everyone to emerge, in some way or other, as a winner.

Only the market can help

Continual slumps in the oil price while the conference was running didn’t make things easier. What’s more, they indicated that “the markets” did not care much about the Paris shambles. There is only one silver bullet: finally putting a price tag on air pollution, one that is in line with the markets. Only when carbon dioxide is given an adequate price, when air pollution becomes too expensive, will we see a change of thinking. Occasionally, there are – in the EU, for instance – meaningful approaches to emissions trading schemes. But they would have to be organized properly and linked to other existing schemes in North America and China.

Naturally, environment ministers returning home will now boast of the success of their Paris mission. But whether Saturday’s celebration was justified or not will become more apparent when the climate treaty is submitted to member states’ parliaments for ratification: it is at this point that nations will have to make a stand and show what they’re really prepared to do to keep the promise – which, indeed, it is – of Paris. Looking at the difficulties faced by Germany while implementing its transition to renewable energy sources, one is led to surmise that the task is likely to be much more difficult elsewhere – if not impossible.

Have something to say? Add your comments below. This comments thread closes automatically in 24 hours.