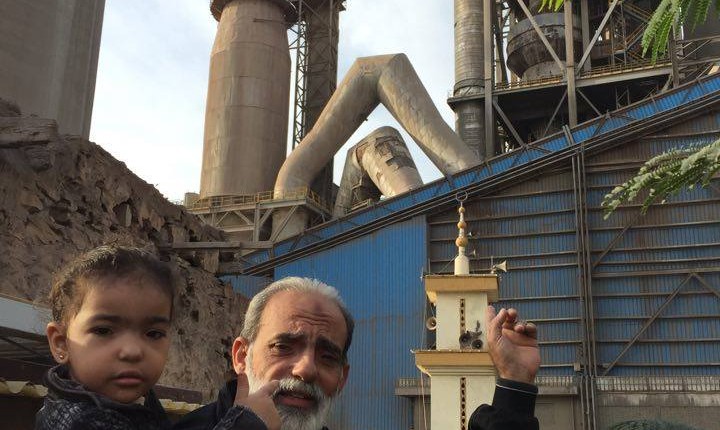 The old low-rise beachfront house of Mostafa Ghazal and his family in Alexandria is just 20 metres away from new machinery installed by the nearby cement factory.

Working as a house painter, his apartment walls display a mix of vivid colours. But now piles of dust have become a more significant feature of the apartment.

Ghazal and his family have been suffering health problems that they attribute to dust in the neighbourhood. Despite the existence of many factories in Wady Al-Qamar churning out products such as petrol and salt, residents say their health problems are mostly due to the cement plant, which is right next to Ghazal’s residential block.

Well-known as an energy-intense industry, cement plants rely heavily on big machinery rather than manpower. Between 50% and 60% of CO2 emissions from cement production are generated during the combining and heating of limestone and other materials to produce clinker. The process requires kilns that cook the limestone at high temperatures, an essential part of cement manufacture.

The factory has shared Wady Al-Qamar with residents since the early 20th century, but in recent years it has expanded operations, adding a new kiln that sits right next to residential buildings. Following the natural gas shortage, the factory started burning imported coal to heat its kiln, according to one of the residents who has a son working in the factory.

The consequences for Ghazal of living so close to a cement factory’s machinery, he says, include damage to his hearing and breathing.

“The doctor just told me I will not hear with my left ear anymore,” Ghazal says, referring to damage caused by the machinery.

“We wake up in the middle of the night short of breath. Most of the emissions come out at night. My little daughter Nour has sinus troubles.”

Besides, he said, proximity to the factory has required many “costly” renovations, structural damage to the building, and the removal of huge piles of dust every month from the rooftop.

Going upstairs to the roof, Ghazal points towards ruined home appliances covered in dust, minor fractures in the building and a sharp lump of metal that he claims flew from the factory machines and landed on their roof.

“It’s like I rebuilt the apartment,” he says. “But at the end of the day, it’s inanimate and can’t be compared to our health problems,” he says.

Strolling around the neighbourhood, it’s clear that Ghazal’s experience is not unique. The street running next to the cement plant is filled with shops, a mosque, and a ceremony venue where former presidential candidate Hamdeen Sabahy visited as a part of his campaign in 2012.

On one street corner, the owner of a butcher shop says: “I usually work only indoors. I cannot hang the meat outdoors because of the dust blowing about.” He says the dust comes from the cement factory.

“This shop was my father’s and I cannot afford to buy a new one. But I would rather live in Agamy,” he says, referring to a suburb some 30 km away with fewer factories.

Other families have moved out, including Atef, who went to Agamy but returns to Wady El-Qamar for occasional family visits. “All of us have respiratory diseases, even my wife and daughter who are non-smokers. Dust came out in outrageous amounts, covering everything in the house, as well as our bodies,” he said.

Atef, who studied law and now works at a petrol company, says his old house in the area had been his grandfather’s property as far back as 1925.

“All the firm’s statements are just lip service. We decided to move out, but many other families might not be able to do the same,” he says.

Looking down from her window, an older woman called Om Amgad says the residential block is older than the current factory, which she insists has changed location over the years.

However, she says the factory is a big local employer, and moving it elsewhere is not an option: “I disagree with moving the factory. Many people would become unemployed and they have children to raise.”