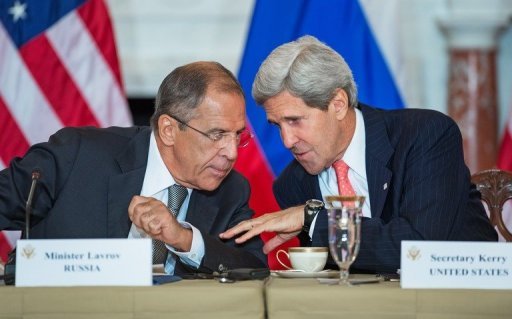 US Secretary of State John Kerry met with Russian President Vladimir Putin in Moscow on Tuesday for talks on the Syrian conflict, with the aim of narrowing differences between the two sides.

The main point of contention between Russia and the US is the role of Syrian president Bashar Al-Assad in any political transition.

There is also disagreement over which rebel groups should be part of peace talks, with Russia insisting that several groups identified as “moderate” by the West are, in fact, terrorist organisations.

Kerry met earlier with Russian Foreign Minister Sergei Lavrov to make progress ahead of a potential third round of talks between world powers scheduled for Friday in New York, given that certain “preconditions” were met, including agreement on which rebel groups to exclude.

Ahead of his meeting with Lavrov, Kerry said that the world would benefit when “powerful nations with a long history with each other have the ability to be able to find common ground.”

Regarding Assad’s future, Lavrov had previously mentioned that defeating terrorism must be the priority, and that Assad will have to play some kind of meaningful role in the future of the country. The US, however, has consistently called for Assad’s removal.

Russia, a close ally of embattled President Al-Assad, began airstrikes in Syria in late September. Though Russia insists it is fighting “Islamic State” (IS) and other terrorist groups, Western nations have accused Moscow of attacking the “moderate” opposition forces as well.

Russia, meanwhile, has aired concerns that Western military intervention might be primarily aimed at regime change in Syria, rather than the alleged aim of defeating IS.

NATO nations have stepped up their military deployments to Syria since the deadly terror attacks in Paris that left 129 people dead.

The military deployments mean that both NATO and Russia now have special-forces troops on the ground in Syria – as well as a wide array of military hardware – potentially pursuing different aims, raising concerns of possible clashes between the two global powers.