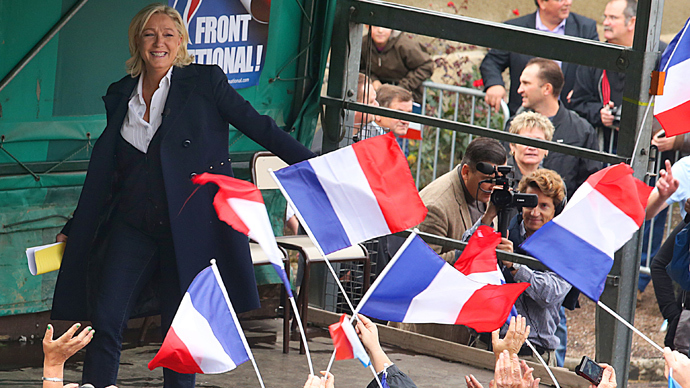 France’s far-right National Front (FN) party failed to win a single one of the nation’s 13 regions in the recent regional elections, despite having taken a lead in six regions during first round several weeks ago.

The second round of municipal polls on Sunday saw a relatively high turn-out, with voters from both right and left casting their ballots strategically in order to ensure FN candidates did not take any seats at all.

The result was a relief for those who fear the FN’s nationalistic brand of politics, but a crushing blow for those who hoped to see the FN assert its anti-immigration and anti-EU agenda.

FN leader Marine Le Pen told her supporters her party was “disenfranchised in the most indecent of ways by a campaign of lies and disinformation.”

However, she said that the FN was now the biggest single opposition force at the local level, and its agenda would increasingly be pushed to the front of politics.

“Nothing can stop us now,” she told supporters.

“By tripling our number of councillors, we will be the main opposition force in most of the regions of France,” she added.

If the FN were to gain the upper hand in French politics, with Le Pen perhaps even taking the presidency, it would likely implement anti-immigration and anti-EU measures across the board. Indeed, many explain the rise in the FN’s popularity in terms of growing concerns over security and terrorism, along with the influx of refugees from the Middle East and Africa.

For many of Le Pen’s opponents, the rise of the FN is a serious worry, and something that must be averted by almost any means. Among them is French Prime Minister Manuel Valls, who says that politicians cannot continue as if nothing had happened.

“We cannot go backwards. We had been warned about the threat from the extreme right,” he said. “The National Front is still there and represents a danger, notably for the major election, the presidential.”

The rise of the FN in the first stage came as a shock for the socialists as well.

“I will never forget the results, especially those of the first round,” said Jean-Christophe Cambadélis, head of the Socialist Party, on Sunday evening.

Speaking to Daily news Egypt, French political analyst Gespard Estrada said he believes the increased turn-out in the second phase, which was 8.5% higher than the first phase, was the reason behind the FN’s defeat.

“Nobody believed that the FN would be in the lead in six regions in the first phase. Therefore, many citizens who did not vote during the first round did so last Sunday, contributing to elevating the turnout during this second phase, and the electoral results of the right and left wing traditional parties, such as the Socialist Party and the Republican Party,” he said.

Another reason for the FN’s waning numbers in the second round was the mobilisation of the Socialist Party in favour of the Republican Party in the regions where the Le Pen family could have won the election, according to Estrada.

He added that support for the far-right is increasing in Europe generally, and the next years may witness more political victories for them.

“On a larger scope, we can say that French society is going more and more to the right, in terms of values, such as immigration, security and integration of foreigners. This contributes to the rise of the FN in the near future, even if I do not think that Marine Le Pen is likely to win the 2017 presidential election”, he said.