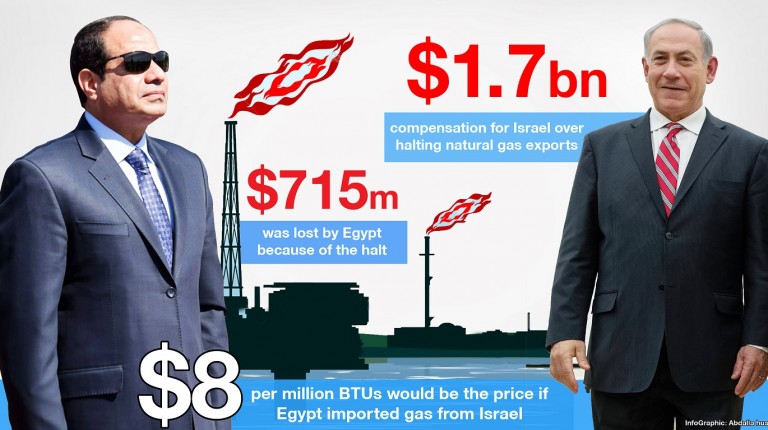 When asked to describe Egyptian-Israeli economic relations in early 2015, head of the Foreign Trade Administration in the Israeli Economy Ministry Ohad Cohen  assured that they were “stronger than ever.”

2015 is however ending with renewed tensions concerning gas dealings between Cairo and Jerusalem, with the looming appeal of a Swiss court’s decision that the Egyptian General Petroleum Company (EGPC) pay $1.7bn to Israeli companies as compensation for the shortfall in natural gas supplies.

These tensions mark a divergence from the post-1979 period of peaceful relations and economic exchange between the bordering countries, a period following the Egypt-Israel Peace Treaty that allowed Israel to purchase oil from Egypt

However, the more recent history of Egypt-Israel resource exchange has been subject to turmoil. Immediately following the 25 January Revolution in 2011, pipelines transferring natural gas from Egypt to Israel were repeatedly targeted by militants. Egypt’s revolutionary climate and its political vacillations resulted in the cessation of natural gas exports to Israel in 2012, ending a 20-year agreement between the two parties and prompting Israeli firms to turn to international arbitration to seek compensation.

Ibrahim Zahran, the petroleum expert responsible for filing a formal complaint documenting purported collusion in the Egypt-Israel gas deal and the subsequent halting of natural gas exports to Israel, told Daily News Egypt he is not optimistic about the negotiations.

“The arbitration was wrong and Egypt has to take a legal action to respond,” Zahran said, stressing that Egypt does not have the financial resources to pay the court-ordered compensation.

Alternative means of compensation would prove equally unlikely, according to Zahran. As Egypt already has a wealth of natural gas reserves and expects natural gas production to augment in 2017, the country would not find it economically prudent to import gas from Israel, which despite its own reserves, does not anticipate an increase in production until 2019.

In early December the Egyptian General Petroleum Corporation (EGPC) and the Egyptian Natural Gas Holding Company (EGAS) announced the ICC’s decision in the arbitration ruling mediating the conflict between the Egyptian companies and the East Mediterranean Gas Company (EMG) and Israeli Electric Corporation (IEC). The ruling stipulates that EGPC and EGAS must pay compensatory funds totalling $288m and $1.7bn to the EMG and IEC respectively.

The East Mediterranean Gas Company (EMG) requested $1.5bn, but was granted $288m, while the Israel Electric Corporation (IEC) was granted $1.7bn, almost half of the $3.8bn it requested.

The ICC’s ruling supported EMG’s and IEC’s contention that compensation is necessary for the shortfall in gas supply and its attendant damages on the Israeli energy sector following Egypt’s halt in gas supply.

Egypt, in response, is following-up on the annulment of the ICC ruling before Swiss courts. International legal advisor Shearman & Sterling law firm told EGAS that it has the right to appeal the ruling in line with Swiss law.

Following the announcement of the ruling, the Egyptian government froze negotiations between companies seeking to import gas from Israeli fields and suspended decision on import approvals until the legal position of the arbitration ruling against Egypt and the results of its appeal become clear.

The unilateral action by the Egyptian government has confused Egyptian company Dolphinus Holdings, among whose responsibilities include negotiating the import of Israeli gas, as to how to proceed. The company said they were told it is necessary to freeze negotiations with Israel after the ruling of the international arbitration.

Dolphinus Holdings, which Alaa Arafa is heading, is a consortium owned by Egyptian investors and partners in Israel’s Leviathan field.

Egypt’s decision to halt negations and subsequent trade with Israel could be a strategic decision, as Egypt is an important export destination for Israel. Following the Egyptian government’s decision, Israeli Prime Minister Benjamin Netanyahu sent a special envoy to Cairo for talks concerning the Swiss court’s decision.

Once dependent on natural gas imports, Israel is establishing itself as an exporter after the exploration of Tamar and Leviathan fields in 2009. Israel’s burgeoning resource economy coupled with Egypt’s energy shortage after the revolution in 2011 has prompted some companies to consider importing gas from Israel through the already-built pipelines between both countries.

Talks over exporting gas from Israeli fields to Egypt started in May 2014 when partners in Israel’s Tamar natural gas field – discovered in the eastern Mediterranean in 2009 and holding an estimated 10 tcf of gas – announced a signed letter of intent with Spanish Union Fenosa Gas (UFG) to export up to 2.5tn cubic feet (tcf) of gas over 15 years to liquefied natural gas (LNG) plants in Egypt.

The deal includes several parties, notably Texas-based Noble Energy, which has a 36% stake in the Tamar field.

As UFG has an 80% stake in an LNG facility in Damietta in Egypt and acts as a third-party mediator between Israel and Egypt alleviating historical concerns over relations between the two countries, the EGPC has approved factories in the city to import gas from Israel and obtain a share of the imported gas to meet the needs of the local market, the EGPC said in August 2014.

Egypt was said to receive gas imported from Israel at a price no greater than $8 per million BTUs, compared to an average price of $16 per million BTUs from other countries.

However, despite the apparent savings, there are several externalities not factored into the quoted $8 per million BTUs. Ancillary costs for importing the gas include: regasification and transportation expenditures centred on the regasification boats that convert the liquefied natural gas back into its gaseous form. The EGPC estimates the cost adjusted for externalities per million BTUs to reach $18.

In October 2014, a non-binding letter of intent was signed between the Tamar Partners and Dolphinus Holdings, which confirms the intention of the involved parties to carry out negotiations facilitating the transfer and sale of natural gas from the Tamar gas field to Egypt.

The gas supply will be 250,000 MMBtu (One million British Thermal Unit) over a period of seven years, of quantities of surplus gas from the Tamar field.

Gas quantities will delivered to Egypt through the Egyptian-Israeli East Mediterranean Gas (EMG) pipelines, constructed a decade ago to transfer Egyptian gas to Israel. Mubarak-era business tycoon Hussein Salem, currently in Spain, owns shares in EMG and is a defendant in a number of cases regarding profiteering and seizing public funds.

Negotiations have continued in 2015. In March, officials from the Ministry of Petroleum were reported to have met representatives from international oil companies, British Gas (BG) and Union Fenosa, in London to discuss Israeli gas supply to Egyptian power plants.

Dolphinus is expected to receive 4 BCM (billion cubic meters) of gas per year over 10-15 years in the final agreement.

Commenting on the preliminary agreement, Egypt’s Ministry of Petroleum issued a statement indicating that the Egyptian petroleum sector is not involved. It highlighted that it was already announced that any agreement will not be reached without the approval of Egyptian authorities and the projects to be implemented must be aligned with the national interests of Egypt and contribute value to the economy.

The statement noted that the petroleum sector in Egypt is not opposed to private companies’ needs to import gas using the state’s facilitations and infrastructure, and in return the state would receive a tariff that is to be agreed upon.

The recent discovery of offshore gas reserves has shifted Israel’s regional position in the resource market. While Israel was once dependent on imports to cover its needs of natural gas; the discovering of the Leviathan offshore deposit in 2009 enabled the country to establish itself as an exporter after covering domestic needs.

Production in the Leviathan field is scheduled to start in 2019-2020, delaying Israel’s emergence onto the regional energy sector temporarily.

Egypt has similarly seen a potential significant shift in its resource future, after a period following the 2011 revolution in which it suffered energy shortages. In August 2015, the Italian company Eni announced the discovery of the Zohr natural gas deposit in the deep waters off Egypt’s north coast.

While estimates are yet to be conclusive, early reports suggest that the deposit could hold a reserve of 30tr cubic feet of gas on an area of approximately 100 sqkm. The Zohr reserve is the largest gas discovery ever made in Egypt and in the Mediterranean Sea, according to Eni.

EGPC has reached an agreement with the Italian petroleum company Eni to begin production from the Zohr gas field by 2017, with the goal of a daily production capacity that will reach 1bn cubic feet (bcf).

Between the newfound resource prosperity of both countries, several extenuating factors will determine the future of the region’s resource market.

Notably, Egypt has a highly developed resource infrastructure, with the largest terminal for gas in the Mediterranean that can receive up to 9bn cubic feet of natural gas per day, in addition to a liquefaction plant that can export 1,880m cubic feet per day, securing for the country more foreign currency reserves after export.

However, Israel produces gas from eight fields, in addition to the newly discovered Ishai field in the Israeli and Cypriot territorial waters.

Outside of the geopolitical posturing, the two sides have seen an enforced entwinement of their interests, tainted as they are by recent corruption scandals.

A confidential document prepared by the US embassy in Cairo, revealed by Wikileaks in September 2011, said the US perceived the gas deal as “the most lucrative ever”.

The gas deal at that time had faced strong opposition from activists and civil society organisations, but with a few years, financial corruption was proven in the case. In June 2012, Fahmy was sentenced to a prison term of 15 years and businessman Hussein Salem was also found guilty and sentenced to 15 years in absentia for profiting from the gas deal.

The defendants were found guilty of harming the interests of the country and squandering public funds by selling and exporting natural gas to Israel at below market rates.

Egypt lost an estimated $715m in revenue due to the collusion between Fahmy and Hussein with Israel, according to the general prosecution. All of the defendants in the case were collectively fined approximately $2.5bn.

Despite this recent tension, Israel has shown signs that it wants to improve the relations. Last week, Israel revealed intentions to give Cairo 2% of earnings from the Qualified Industrial Zone (QIZ) in Egypt, following the release of Israeli Ouda Tarabin from Egyptian prison.

The QIZ concept was established in 2004 under a trilateral agreement between the US, Egypt, and Israel. The agreement grants Egyptian products from pre-approved zones tariff-free entry to the US provided they contain a minimum of 11.7% as inputs from Israel.

As Egypt does not have the resources to pay the gas deal compensation, it is expected that Egypt can carry on negotiations over importing Israeli gas as indirect way to avoid the fine. However, negotiations have seemingly reached an impasse as Israel insists on receiving the compensation.

North Sinai holds a festival for people with special needs

EGPC, EGAS to follow-up on annulment of ICC’s rule

Egypt, Greece and Cyprus to cooperate in natural gas exploration