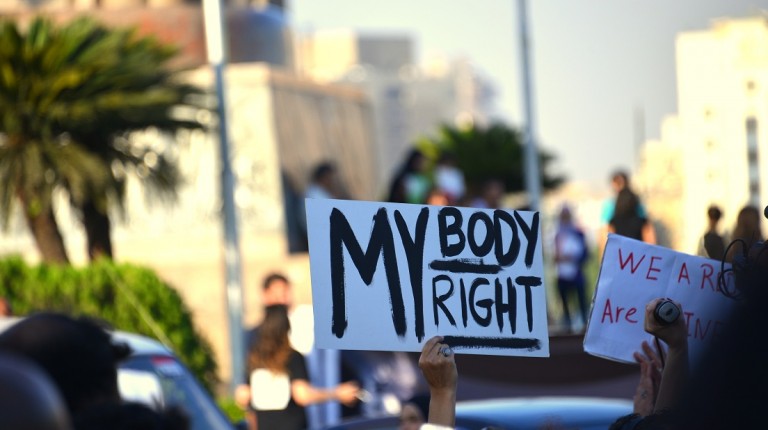 By Shaden Khalil
A 30-year-old bride, Maryam Mahmoud, spent her first night of marriage in physical and emotional pain. Her 40-year-old husband, to whom she had been engaged for three years, has forced her into having sex with him, ignoring her request to postpone their first sexual encounter until she felt more comfortable him.

“All I felt was pain,” Maryam described of the night. “During the early days of my marriage, I thought it might just be my ignorance but when this continued several times, all I could do was complain to my family.”

Sexual consent is often defined as two partners, who are mature, aware and capable of making a conscious decision, accepting sex without threats or coercion. Neither partner should be under the influence of alcohol or mind-altering substances to the extent that it interferes with their ability to give consent.

Noura Mohamed, the manager of a programme aiming to combat violence against women at the Centre of Egyptian Women’s Legal Assistance (CEWLA), recounted the story of a woman who was raped by a husband, who took her income and defamed her, spreading rumours about her “questionable morality”.

The woman said she had been exposed to unwanted sexual acts previously but had never spoken up prior to that day. When she did finally speak up, his response was to threaten to kill her and she said she also wanted to kill him since she knew the law would not safeguard her rights.

Mohamed said that in many cases as these, the main role of the programme to combat violence against women is to provide social, psychological, legal, and financial support to women who suffer from physical abuse. Such programmes, along with legal guidance programmes, work in parallel towards tracking the reasons behind each individual case and solving it through legal frameworks.

Mohamed said they also have intervention procedures, if required, and give women recourse to the available choices to help them make informed decisions and seek out the best legal procedures. They also provide psychological sessions and therapy exercises for survivors of domestic violence and marital rape.

“Then we provide them a job in factories or workshops, teaching them a craft like sewing, or help them create small projects to prevent their exploiting to be independent and to become a decision maker,” Mohamed said.

Marital rape is not an individual issue and many survivors come to the centre. They are usually of particularly low-income backgrounds, with mid-level education, and aged below 40.

In the case of the woman who came to the centre with her story with wishes to kill her husband, they provided her with numerous legal and therapy sessions, and the woman eventually managed to get a divorce from her husband.

The percentage of marital rape cases is low, as reported to El-Nadeem Centre for Rehabilitation of Victims of Violence. According to women rights activist Azza Kamel, who works with the observatory Fouada Watch documenting reports of violence, there are no accurate statistics regarding domestic violence against women.

A report prepared by the Central Agency for Public Mobilisation and Statistics (CAPMAS) in 2005, which is the most recent report on the matter, stated that 4% of women in Egypt have been forced to have sex with their spouse. The majority of incidences of marital rape occur to wives during the period between adolescence (underage marriage is still common in rural areas in particular) and approximately 35 years of age or while the woman is deemed still able to reproduce.

Women in rural areas are more likely to experience violent coercion to have sex with their spouses, the rate ranging between 5.5% and 7.5% in those areas. There is a higher incidence of marital rape among women who work for a living compared to housewives.

Mothers of victims and survivors tell them that they have encountered similar things and that they must endure in silence. “Mothers often advise daughters that they should never oppose their husbands and should comply with whatever he wants so they can protect themselves,” she said. Parents often oppose the idea of taking any procedures against the husband, arguing that laws are ineffective and procedures often too long.

CEWLA psychologist Mona Fathy said the rape victim’s family is often complicit in increasing the husband’s violence since they implicitly approve it. Oftentimes, when a victim has nowhere to flee but her family’s home, the parents will “return her” to the husband despite the fact that she was insulted and beaten.

This often strengthens the husband’s position, reinforcing the idea that her family will not defend her, Fathy said.

“Some women endure the situation and refuse to talk because they feel responsible for protecting their family members from prison, as their response in such circumstances could be killing the husband. Alternatively, she fears that the husband could kill a family member,” Fathy said.

In one case, a woman said her husband threatens her by putting a broom on the bed and saying he will “put the broom in her body” if she refuses sex. “This made her feel like an animal or an object that her husband uses whenever he wants to for his enjoyment, without caring for her feelings,” she said.

Through her discussions with women, Fathy learned that victims are often exposed to many other forms of violence or are not provided with sufficient finances by their husbands. The survivors come mainly for legal guidance but when they know that there is psychological guidance, they also attend psychological sessions.

Salwa Waqad, a researcher and psychologist at the El-Nadeem Centre, said that often when a survivor recounts her story, they discover that she suffered from marital rape but was not aware of its definition or that it was a problem. Marital rape is simply “a branch of violence” that the survivor encounters, she said.

“By the second or third visit, the survivor starts talking (after she trusts the centre) about fights with her husband and that he initiates sexual intercourse without any introductions, while she believes she does not deserve such attitude that demeans her humanity,” Mohamed said.

Mona said one survivor often woke up to find her husband raping her. In another case, a husband begs his wife and psychologically pressures for intercourse at times and other times beats her occasionally in the morning for the same reason.

Mohamed said there is insufficient awareness of the issue of marital rape. In certain cases, husbands exploit their wives by forcing them to have sexual relations with other men for financial gain.

“Marital rape is not criminalised by law because is a new societal phenomenon. The legal and feminine organisations demand modifications in the laws to protect women from it,” lawyer at CEWLA Mariam Wahba said.

No accredited methods to fight violence against women

Wahba said there are no procedures to eliminate marital raping or reporting it.  Moreover, all types of violence against first degree female relatives, such as wives, sisters, or daughters, are not criminalised, according to Wahba.

“Turkey is a good example since it has a hotline for women with complaints of marital rape and violence,” she said.

Article 11 of the 2014 Constitution nonetheless bans all forms of violence. Wahba however said that in cases where women report violence case at police stations, husbands get out of the case through a “mercy ruling”, in accordance with Article 17 of the Penal Code.

“In felony counts, if the conditions of the crime for which public prosecution is initiated necessitate clemency on the part of the judges, the penalty may be changed,” the article states.

On the other hand, Mohamed said that only solution for marital rape is divorce or “khol’a”, an option for women to end their marriages to their husbands through court, as the right to divorce is generally only granted to men. Khol’a generally requires women to forgo their financial right in the marriage and in cases of marital rape is often the only option, as such intimate issue cannot be proved, and there are no laws banning marital rape.

“We depend more on khol’a since it is a quicker way of taking action against the husband,” she added.

According to the Egyptian Initiative for Personal Rights (EIPR), there is a national strategy to combat violence against women that was established in 2015 to raise education and awareness of laws, modify previous laws, and denounce violence against women, including marital rape. The strategy aims to protect women and encourage them to report cases, and provide psychological and health services; yet there are no laws banning marital rape.

El-Nadeem Centre psychologist Salwa Waqqad said the centre informs the victim of the consequences of possible legal procedures she can take, and provides legal support “after she makes her decision by her choice”.

“When she has an income and a habitat, this makes her situation positive. Thus she is able to take recourse to a legal procedure with our support,” Waqqad explained.

Fathy said sometimes the woman does not have the time to attend sessions, which creates a problem. After the session, a survivor should be isolated from the violent environment she was in, in order for the treatment to take effect.

“In every police station, there should be a physician and psychiatrist to determine the psychological circumstances of the women [who make complaints],” Wahba suggested.

Society should open up discussions about marital rape and consider the harmed women to modify laws and break the taboos surrounding the issue.

Moreover, Mohamed said there should be awareness initiatives to change gender role stereotypes, with the participation of men, as well as “enlightened explanations” of religion as religious authority figures should tackle misguided ideas publicly in an attempt to resolve them.

Kamel said society can be free from violence and respectful of women and men’s rights. There must be a law that bans violence, and procedures must be established to prevent violence, she said. She called for educating students in schools and universities on human rights and gender equality.

“In universities, there should be programmes to inform students about the topic. Cultural organisations should also have a role,” Kamel concluded.