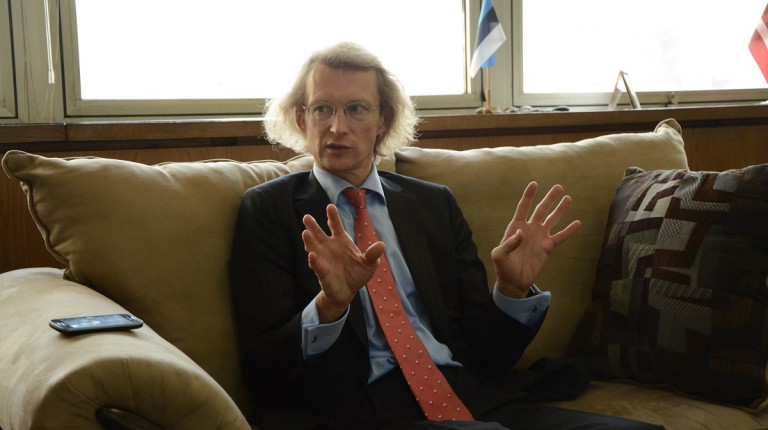 When it comes to e-governance services and IT solutions, Estonia is among the world’s most advanced nations with much to offer in terms of IT and internet-related services. Egypt is becoming a most frequent consumer of those services.
In March 2014, the Egyptian Ministry of Communications and Information Technology signed a Memorandum of Understanding (MoU) with the Estonian Ministry of Economic Affairs and Communications. It will cover areas such as e-governance infrastructure, the implementation of e-government services, and cyber security.
At the other end of the spectrum, Estonia has a great many natural products on offer including wood and paper from its vast forests. Egypt imports such products in large quantities, responding with exports of agricultural products such as tobacco-molasses.
Daily News Egypt met with Estonia’s ambassador to Cairo Sander Soone to discuss cooperation and trade between the two nations.

What is the significance of this MoU?
The two sides are still in contact to establish a system of cooperation. We are in a process of sending Estonian experts to Egypt so that they can assess what is actually needed there. We propose that Egyptian experts, officials, and also ministers will visit Estonia and see for themselves how e-governance works. Estonian private companies, who worked on the  applications providing e-services to citizens, are also interested and ready to establish contacts and provide those solutions here. We are progressing and we hope that next year there will be some developments.

How did Estonia become a leading nation in IT and e-governance services?

It is very simple; we regained independence in 1991 so we had to start building up our country from scratch because we did not inherit very much, especially modern commodities. We took the modern commodities and tried to apply them. At that time, it was start of internet and mobile communications development. Since there were no ready-made solutions, we technically had to invent ours by ourselves. A small country such as ours, with no big labour force, had to apply this in the most efficient way.
Through e-governance and technology services, citizens do not have to queue in banks, shops, or governmental offices. They can do it all at home, which is very comfortable, effective, and quick. This efficiency and fast-pace definitely benefit both institutions and companies, as well as the citizens. It  all contributed in favour of the country and its economy.

Initiated by government developmental plans, Estonian IT companies created the programming and the project management, and here we are, ready to assist interested  countries with our experience, including Egypt.

Why did Estonia’s GDP shrink by 0.5% over Q3 of 2015, according to preliminary data?
One quarter itself  is not a significant decline, although it was a sign, because we are growing. In the second quarter, our GDP witnessed an increase of 2%. We will have to look at the whole year. Predictions for 2016 and 2017 are even higher, with GDP growth expected to be 3%and even more.
Our economic situation and growth are relatively good. Our economy is linked to Europe and the general trend is that the economy is growing but slowly. Our trade partners are the EU and mostly our neighbors: Sweden, Finland, Latvia, and Lithuania. The Finnish economy, for example, also has problems. This impacts us because we depend a lot on our trade with Finland. On the other hand, the Swedish economy is way better than some other countries, which positively influences our economy.

What are the main products Estonia exports?
The Estonian economy is very mixed. We do not have only one or two major things to produce and sell. The high-tech industry is a significant part of our economy. The machinery we produce is mostly related to electrical engineering and electrical products including normal electrical products and IT products.

We are strong in the production of wood and paper. Around 60% or more of our exchange with Egypt is wood, paper, and similar products. We also export them worldwide.
Our economy and exports include a bit of everything: food and industry, and also services such as transport, logistics, IT, and financial services.

What is the difference economically between Estonia under the EU and under the Soviet Union?

The difference is huge but simple since they are two completely different worlds. The EU’s economy operates through a liberal market, while the Soviet Union was a command communist regime with no liberties at all. The Soviet Union’s restrictions affected Estonia both socially and economically. Fortunately this is history and as history showed that the Soviet Union’s economic system was not efficient, unlike the EU’s.

Which nationalities does Estonian tourism mainly depend on?
It depends on tourists coming from Finland, Russia, Sweden, and Germany, who are nearus and why they come in big numbers to visit us.

What can Estonia offer for Egyptian tourists?
Estonia has a different natural environment than Egypt’s regarding climate, culture, and history. Egyptian tourists can discover new tourism destinations in Estonia, which has forests to enjoy nature and  less population density, beaches, and skiing.

Another interesting aspect about tourism in Estonia is medical tourism including spas, medical centres, and resorts. We also have mud-baths with mud extracted from the Baltic Sea and  the patient’s entire body could be covered with it during the baths. It is a good feeling and has many cures. Medical tourism is popular among  Finish and Russian tourists.

Estonia seems to be a small country but it has a lot to offer. Tourists could stay for one or even several weeks to discover and enjoy Estonia. Tourists could also utilise their stays to visit the Finish capital of Helsinki, the Latvian capital of Riga, the Swedish capital of Stockholm, and the Russian city of St. Petersburg because Estonia is well connected with these destinations. In the summer, it takes only an hour and a half from Estonia to reach Helsinki by ferry, because it is 80km away. The distance between Estonia and the other cities I mentioned is only 100km, 200km, or 300km.

How could we improve Egyptian tourism to Estonia?
To improve the status of our tourism we have to raise interest and awareness of Egyptian tourists to visit a different destination. Our embassy in Egypt is trying to familiarise Egyptians with Estonia and also provide information about the country. Some travel agencies in Egypt have indicated recently that they would investigate new touristic destinations and to include Estonia as one of  those destinations.

What are the benefits of being a coastal nation with islands?

Islands make Estonia very special; we are very attached to the sea and that makes it a very special tourism destination, even for Estonians themselves. I would also like to highlight that it is not only about islands, because eastern Estonia is also very special with its Lake Peipus. This is the biggest trans-boundary lake in Europe, on the border between Estonia –in the EU – and Russia. This lake and surrounding area has a very special culture and atmosphere to enjoy. But tourists can also enjoy also the hills of the South Eastern Estonia that make this area very picturesque. As we mentioned, what is special about Estonia is nature tourism, which includes bird-watching, nature-study tours, and many other activities.

We are grateful to Iceland for their reaction, which positively affected our international relations and it was only a matter of time before Denmark and other countries recognised us not much later.

Was Estonia concerned about losing its independence to the EU, after being under the control of the Soviet Union?

In the EU, nobody is under anyone else’s control. The union is based on equality and consists of countries that share the same ideas and values. Of course it includes different countries but this difference is regarding size and economy not principles. The EU nations are treated on equal terms.

Being under the Soviet Union is totally different from being part of the EU; they are two different worlds. We were incorporated  to the Soviet Union by military force, so it was an occupation, unlike the EU, which we joined by our own free-will. It has been characterised that the Soviet Union was the prison of nations, while the EU is a union of free nations.

Following the UN Human Rights Council’s evaluation, Chile, Estonia, Slovenia, Tunisia, and Uruguay recommended that Egypt should ratify the Rome Statute of the International Criminal Court (ICC). However, Egypt rejected this. Do you have any comments on this?
ICC’s values are very dear to our ideas because we are for international law and against war crimes. It is a topic we are following closely and so does Slovenia and others, so we promote many countries to join the Rome Statute. Countries that have not joined the ICC are a minority, because more than 100 countries are part of it and supporting it. We make these recommendations to Egypt because it is a big country and is involved in many international issues.
In this regard, I would like to mention that Estonian diplomat Tiina Intelmann, who was also president of the Assembly of States Parties of ICC from December 2011 until December 2014, visited Egypt during her term.

I am sure that Egypt shares the values of the Rome Statute and the ICC and they are close to the values of Egyptian foreign policy because they are meant to fight international crime, aggression, and genocide.