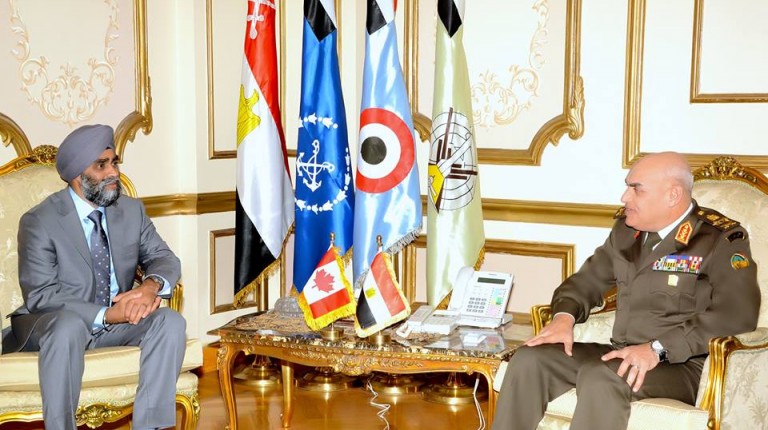 Egyptian Minister of Defence Sedky Sobhy met with his Canadian counterpart Harjit Sajjan Saturday to discuss issues of military cooperation between both countries, according to an official statement issued by the army spokesman.

They discussed regional and international developments to combat terrorism and their impact on retaining security and stability in the Middle East. Sobhy stressed on the deep and friendly relations between both countries and expressed hopes for increased cooperation in different fields, according to the statement.

Sajjan was sworn in November as Canada’s ew Minister of Defence in their new cabinet headed by Prime Minister Justin Trudeau.

Canada is a member of the US-led coalition established in 2014 to fight “Islamic State” (IS) in Syria and Iraq while Egypt joined the French-led coalition supporting the Iraqi government in their fight against IS.

Egypt was also part of the newly-formed Saudi-led Islamic coalition that constituted 34 countries pledging to fight against terrorism.

The visit took place just a day after Sajjan affirmed his country’s commitment to end its involvement in airstrikes against IS in Syria and Iraq and promised to readjust its mission.

The Canadian cabinet has previously announced assigning more troops to train Kurdish fighters in Iraq instead of carrying out airstrikes. Sajjan explained Canada’s decision to take 25,000 Syrian refugees, saying that besides being a humanitarian project, it is also a way of hitting IS.

Information war destroys countries, we have to face its danger: Al-Sisi