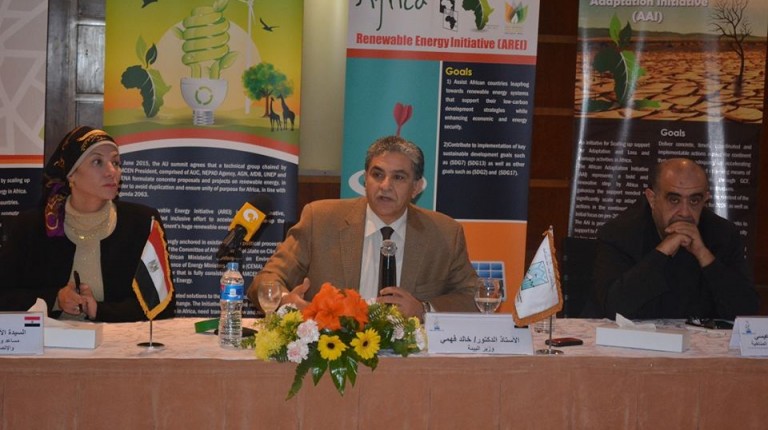 On Monday, at a press conference in Cairo, the Ministry of Environment’s delegation representing Egypt in the COP21 reviewed the progress made during talks in Paris and the attendant efforts needed for a policy of adaptation to climate change, rather than one that seeks to mitigate its effects.

Minister of Environment Khaled Fahmy described the talks in Paris as “intense and tough”, during Monday’s news conference.

“The climate change crisis will become more severe in the upcoming years and will impose a grave threat on following generations,” he said.

Two weeks ago, representatives of nearly 200 countries reached a binding agreement that set ambitious goals to limit temperature increases and to hold governments accountable for reaching those targets.

Egypt contributes 0.6% to the world’s carbon dioxide (CO2) emissions, according to Fahmy; yet, Egypt is among the most vulnerable countries to the effects of climate change.

Highlighting a stance that sees climate change as an inevitable phenomenon and Egypt’s susceptibility to its adverse effects as asymmetrical to the developed north, Fahmy advocated a strategy of adaptation rather than continued mitigation.

“Other countries were pushing us to adopt elimination strategies but what we truly need is adaptation measures,” he said.

“Mitigation does not mean totally eliminating CO2 emissions and there are no binding numbers in the agreement.”

The press conference gathered an assembly of journalists, researchers, and officials of different ranks from the ministry, all of whom had attended COP21, to address the media regarding progress made in areas of adaptation, technology, capacity building, and negotiations stances.

Hisham Eissa, the head of the climate change central unit at the ministry, said several factors have contributed to the success of COP21, compared to the conference held in Denmark in 2009.

At least 10 preparatory meetings were held ahead of the Paris talks, in which all participating parties presented their national strategies beforehand with discussions unilaterally occurring at the presidential level, according to Eissa.

In addition to the historic, binding agreement, a more ambitious set of pledges were announced by countries during COP21, including a reduction in the increase in atmospheric temperature by a factor of 1.5 degrees, the review of national strategies every five years, and the reduction of 10 metric tonnes of CO2 emissions worldwide by the end of 2020.

Several challenges lie ahead of Egypt to implement its national intended strategies. Among those the most difficult are the ability to ensure negotiations track the progress of implementation, an issued that was resolved by scheduling an annual review session, starting in 2016, to monitor progress made in talks and agreements. Other challenges extend to funding the adaptation strategies and the pricing for CO2 emissions.