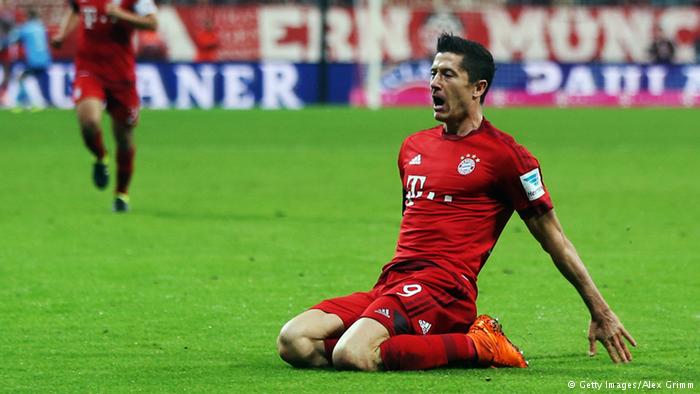 New head coaches, remarkable comebacks and a magical nine minutes. At the end of the first half of the 2015-16 Bundesliga season, it’s time to look back and take stock of what has happened in Germany’s top flight.
Perhaps the best place to start talking about the last six months is with nine minutes. Robert Lewandowski’s five goals in that time was unprecedented, a world record feat that added a slice of unpredictability in Bundesliga history. Bayern’s 5-1 demolition of Wolfsburg – one of three five-goal performances for Bayern in the Bundesliga – was the highlight in another entertaining Hinrunde (first half of the season).

An eight-point gap for the defending champions was perhaps part of the preseason prediction, but the pre-Christmas confirmation of Pep Guardiola’s departure in 2016 was not. The timing was poor and sparked a flurry of unsettling reports, but perhaps the news isn’t that inevitable. The Spaniard’s growing unrest about the club’s medical situation combined with the lure of the Premier League were always going to get Guardiola thinking. Bayern fans will just wish it hadn’t come so soon.

So good have the defending champions been in the first half of the season, the blemishes stand out more than the victories. An unexpected, goalless draw in Frankfurt and a taste of their own brutal medicine in Gladbach were the only times Bayern dropped points in the first 17 games of the season. Pep Guardiola’s sides were attack heavy, regularly playing with one or two defenders and sweeping opposition aside in uncompromising fashion. A fortunate penalty decision on matchday four combined with Lewandowski’s heroics against Wolfsburg two games later kept Bayern at their best. So much so, that by the time of “Der Klassiker” against Borussia Dortmund, the only classic thing about it was just how good Bayern were. In their final game in 2015, Bayern won again but looked, understandably, distracted. Next year, if they want to send Guardiola on his way having won it all, there will be no room for that.

A Dortmund rebound and a Gladbach resurgance

At times, Dortmund have been just as good as Bayern this season. Sadly though, BVB’s ability to draw at home against Darmstadt (matchday seven) and lose to Hamburg and then Cologne right before Christmas is one of the main reasons Dortmund could not keep the title race narrative alive long enough for it to become a reality.

Nevertheless, it has been quite the start for Thomas Tuchel. A 38-point haul at Christmas should not go unnoticed in the shadow of all things Bayern. A memorable opening day thrashing of Gladbach combined with a derby win against Schalke and a last-minute victory against Wolfsburg have shown Dortmund’s quality this year. Julian Weigl has blossomed and Pierre-Emerick Aubameyang’s rise is exciting for both the club and the league. If the gap at the top stays big, at least Aubameyang’s battle against Lewandowski – the man he has now replaced at Dortmund – will provide entertainment.

Away from the top two, the rest of the league provides its fair share of intrigue, and nowhere more so than in the capital. Perched in third ahead of a host of Champions League representatives, Hertha Berlin have exceeded expectations almost every week. It wasn’t until Pal Dardai’s side beat Leverkusen on matchday 15 that they got the recognition they deserved.

Perhaps only Andre Schubert’s astonishing saving of Gladbach can match Hertha’s achievements. Lucien Favre’s decision to walk after defeat in the derby left Gladbach on a five-game losing streak. The little-known Schubert took over and flipped the script, winning six in a row.

Wolfsburg managed six unanswered goals against Werder Bremen on matchday 13, and while the club have dealt well post Kevin de Bruyne, they have shone brighter in Europe than they have in the Bundesliga. Leverkusen have flattered to deceive this year, and have nearly lost as many games as they did in the whole of last season. But they do have Chicharito. The former Manchester United striker’s 19 goals in 22 games in all competitions have been Roger Schmidt’s saving grace – matchday 16 and the destruction of Gladbach perhaps the peak in performance.

The other Schmidt – the one called Martin, in charge of Mainz – has good form and a striker who regularly scores. Yoshinori Muto’s hat-trick for Mainz on matchday 11 was only the second time a Japanese player has managed the feat in the Bundesliga – the ghost of Shinji Okazaki didn’t even get time to arrive. Andre Breitenreiter certainly did as the new Schalke head coach, and at Christmas time the club are probably where they should be. Leroy Sane leads a pack of promising youngsters and they are still in the hunt for that Champions League spot that they are after.

Anthony Ujah’s 10 goals aside, Werder Bremen would want to start the season all over again. Hoffenheim have had a winter to forget, and Huub Stevens doesn’t look like changing that. Frankfurt’s entertaining eight goal thriller against Cologne on matchday four was a rare highlight for Eagles fans, while Hannover continued their relationship with the lower half of the table. Augsburg started the same way, but a late resurgence inspired by European history has them on the right path, and Raul Bobadilla looking like a new striker. Cologne are happy in mid-table, especially after a festive home win against Dortmund.

Both Ingolstadt and Darmstadt have exceeded expectations in the first half of the season, but there’s an all-too familiar feeling about how 2016 will end for the Bundesliga newcomers. Without a consistent source of goals and too little quality, their time at the top looks set to be brief. However short and whatever the outcome, the next 17 matchdays promise much and the Bundesliga tends to deliver when that is the case.

Commentary: Security should remain a concern