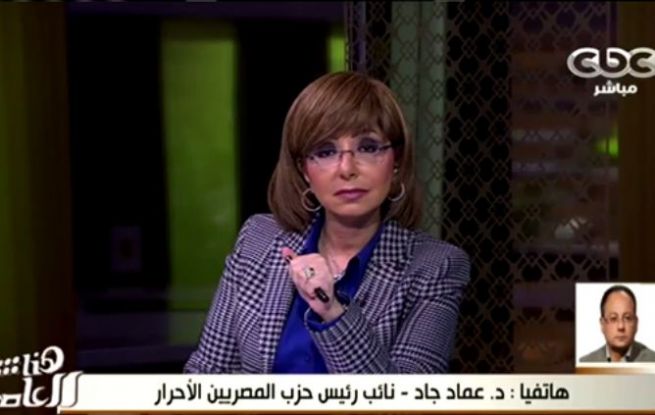 Senior member of the Free Egyptians Party (FEP) Emad Gad resigned from the party, in a sudden announcement on a live television broadcast Monday evening.

The announcement came on TV presenter Lamees El-Hadidy’s show on the CBC network following a flurry of telephone exchanges between Gad and Alaa Abed, the elected president of FEP’s internal parliamentary committee.

“My resignation comes following press statements made by Alaa Abed regarding my candidacy for the position of deputy parliament speaker,” Gad stated.

On the same broadcast, and proceeding Gad’s telephone call to the station by only minutes, Abed spoke to El-Hadidy to indicate that Gad’s aspirations for the title were not in alignment with the party’s internal deliberations. “The party has not submitted its candidate [for deputy parliament speaker],” Abed stated.

Earlier this week, Gad reportedly told local news website Al-Youm Al-Sabea that he decided to apply for the position of deputy parliament speaker without clarifying whether he intended to apply for the position under the auspices of the FEP or as an independent. However, he stated that  the FEP should be represented  in the parliament’s primary administrative mechanism, as it is holds the highest number of seats for a political party, with 65 in total.

This administrative mechanism consists of a parliament speaker and two deputies.

There were subsequent calls made by both FEP members into El-Hadidy’s broadcast. Gad told CBC channel that he ‘would never go through the experience of being in FEP again.’ He added that he informed party leaders of an ongoing conflict with Abed. “But nothing was done about it, so I refuse to continue in a party managed in this way.”

According to Gad, the dispute stems from issues between TEN TV channel, of which he is the CEO, and Abed’s wife, a journalist working with the channel. “But Mr Abed took it personally. I never said I was going to represent FEP to allow for him to say otherwise and announce ‘another’ candidate,” he added.

Commenting on the situation to Daily News Egypt Tuesday, the FEP’s official spokesperson Shehab Waguih said the party is yet to make an official announcement regarding its response to Gad’s resignation. Daily News Egypt was unable to reach Gad or Abed for comment.

Although Gad took the comment as “a threat”, saying: “I am not to be told what consequences I will face,” a text in the parliamentary law clearly banned switching political affiliations after being elected or else facing the risk of losing one’s membership, provided a majority of votes.

Gad’s resignation highlights a growing list of problems within the FEP, with the most recent being the resignation of Osama El-Ghazaly Harb, the FEP President of the Board of Trustees. Waguih indicated that Harb had informed party members of his intentions to quit during the elections.

“The party asked Mr. Harb to hold on until elections were completed and therefore we appreciate his consent to do so. The resignation was for personal reasons,” Waguih continued.

The FEP has enumerated several reasons for its objection to the formation of ‘Egypt’s Support’. Waguih explained that what the “so-called coalition’” has done until now resembles a political party in its objectives, structure and financing mechanisms.

Conflicts with six parliamentary members who attended an ‘Egypt’s Support’ meeting continued, as the FEP announced the suspension of one member and the investigation of the other five.

“MP Mai Mahmoud was suspended because she signed their declaration. She has not yet received an official notice due to the ongoing legal procedures of the party,” Waguih said. “As for the rest, some of them had indeed informed the party leader that they would face problems if they did not [attend Egypt’s Support’s meeting], and he was understanding enough to allow them to attend, without signing anything.”

Meanwhile, the party is expected to hold internal elections. Waguih stated that candidates will be announced once the list is finalised. “So far six candidates presented their papers”, Waguih said. The list includes Essam Khalil, current acting president of FEP.